Can Don Draper survive the '60s? 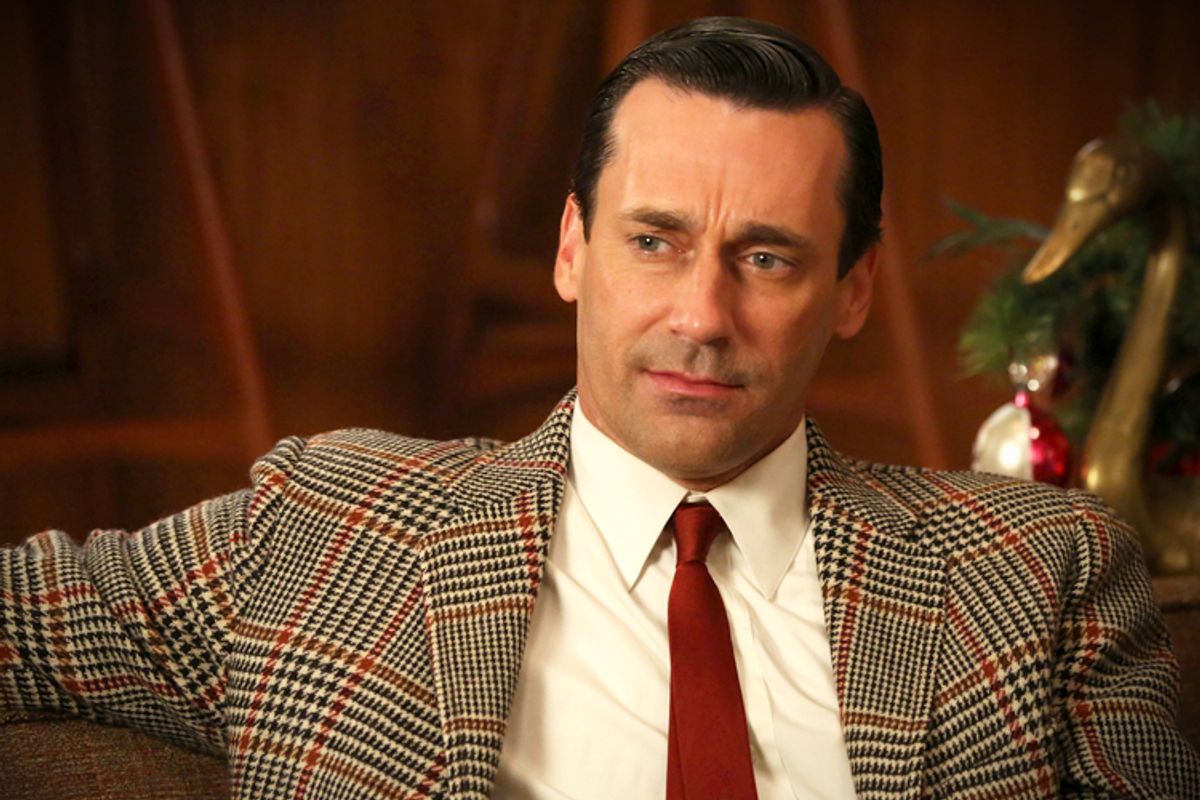 In an interview best remembered for being the one in which he said he had no working toilet, Vincent Kartheiser, "Mad Men’s" unsatisfiable Pete Campbell, described “Mad Men” as “a portrait of white men doing their stuff, just as their power is coming under threat.” Through five seasons the threat to the white guys of Sterling Cooper Draper Pryce has largely been existential. Don Draper’s agency may have a Jewish copywriter, an African-American secretary and a female partner (who prostituted her way to the top), he may have a wife and protégé with their own desires and ambitions, his historical moment may be exceedingly ungenerous to adults, but his worst enemy, the most potent underminer of his happiness, has been himself, his past, his hang-ups, his habits, his mortality. The world is changing, but then the world is always changing. Can he?

Season 6 of "Mad Men," which premieres on Sunday night, begins on New Year’s Eve of the most dramatic year of the ‘60s, but the threat feels existential as ever. Change is all around, in Sterling Cooper Draper Pryce’s improved circumstance, in the tighter silhouette of the pants, in the bushier sideburns and scruffy facial hair, but Don Draper remains as stuck as a slide in a Kodak carousel. How does it feel to live through history? Maybe it just feels like living with yourself.

Early on Don misplaces Dick Whitman’s army-issued lighter and it sends him into an all-too-familiar spiral, self-destructively consumed with the question of his identity. We — Don and, us, his audience — took a year off from this particular psychodrama. When Don married young, fearless Megan, he was making a wish, a wish that he could go forward without having to deal with his past, could shove Dick Whitman into the back of a closet, behind some stylish plaid sports coats. But Megan’s ambitions were not just to make Don Draper feel fresh and new, to cater to his every whim and desire at the expense of her own: When she “Zou Bisou-ed” him it was because she loved him, but also because she loved being onstage. As the end of last season suggested, Megan was only ever a temporary fix to Don’s long-term problem, the problem of being himself, whoever, exactly, that is.

Logically, this scans: People don’t get over their issues just because they’re tiresome. Thematically, it scans too: What’s a more fitting fate for Don than to become as trapped as Don Draper as he ever was as Dick Whitman? (That’s a perfect antihero show ending anyway, one that punishes the protagonist and the soft-bellied audience in equal measure.) But dramatically this trip on the merry-go-round is a bust. Formerly debonair Don, his silver tongue repeating itself, his magic fingers fumbling, is the least absorbing part of the "Mad Men" premiere. Fixated on his own past, Don's getting shown up by his flashy colleagues not only in the world of “Mad Men” but on “Mad Men,” the TV show itself.

Of the four characters showcased in the premiere — Don, Peggy, Betty and Roger — Don is the one who is no fun to watch.  In his scenes, "Mad Men" indulges its most didactic tendencies, its bad habit of taking subtext and putting it up in neon lights, getting as close as a TV show can to commanding “take out your highlighter and underline this symbolically meaningful phrase.” A photographer taking portraits of the partners tells an uncomfortable Don, “Just be yourself.” Don looks at the photographer like he's asked him to stab himself. Wait, does Don not know who he is? As the episode begins, Don is reading Dante’s "Inferno." Is Don trapped in a metaphorical circle of hell, doomed to repeat himself? Does it have to feel like we’re stuck in there with him?

At least Roger, Peggy and Betty — and it is a joy to see each of them — are all charging hard after change, while Don drowns in it.  Watching Peggy kick ass and take names in her new position is probably the purest jolt of pleasure "Mad Men" has supplied since the zippy "let’s make a brand-new ad agency!" episode at the end of season 3. Like her mentor, Peggy can be a harsh, unfeeling taskmaster, but like her mentor, she’s got it. Watching her solve problems and deliver speeches with swaggering, fierce intelligence and impatience is the flip side of Don’s flailing: Peggy’s skills and personality — she, unlike Don, has always been expert at burying her past, putting that baby way, way behind her — have combined with the era to give her opportunities she otherwise would never have.

Roger, even older than Don, has spent the last two seasons confronting the possibility of his professional obsolescence. In the premiere he keeps smacking into mortality. But still working out the consequences of his mind-altering LSD experience, Roger is actively trying to figure out how to inhabit the brave new world. Like Don, he can’t stop being himself — making jokes to cover up his feelings, preferring superficial to deep attachments — but his quirks, his sense of fun, his curiosity, his inability to take anything too seriously, make him better suited to the moment. (Roger's grown out his sideburns. Don looks exactly like Don.)

And then there is Betty. January Jones' limitations as an actress have long since begun to serve the character, her superficial manner imbuing Betty with a deep mysteriousness. What is going on inside that head of hers? Jones' performance has always lent itself to the interpretation of Betty as essentially childish: an immature woman looking for someone to take care of her, not quite in control or aware of her emotions, oddly comfortable with children who are not her own. But in the premiere this childishness is juxtaposed with the physical fact of her adulthood. She interacts with a number of kids, and if she treats them like her peers, they still see her as a mother. Time makes grown-ups out of all of us, eventually. Betty, suggestible and immature as she is, does what Don can't: embraces something new. Moving, striving, trying, changing, it's good for the characters on "Mad Men" and it's good for the drama that is "Mad Men." The back of Don Draper's head is still gorgeous, but it's starting to feel awfully still.