Do Americans still not get Reaganomics? 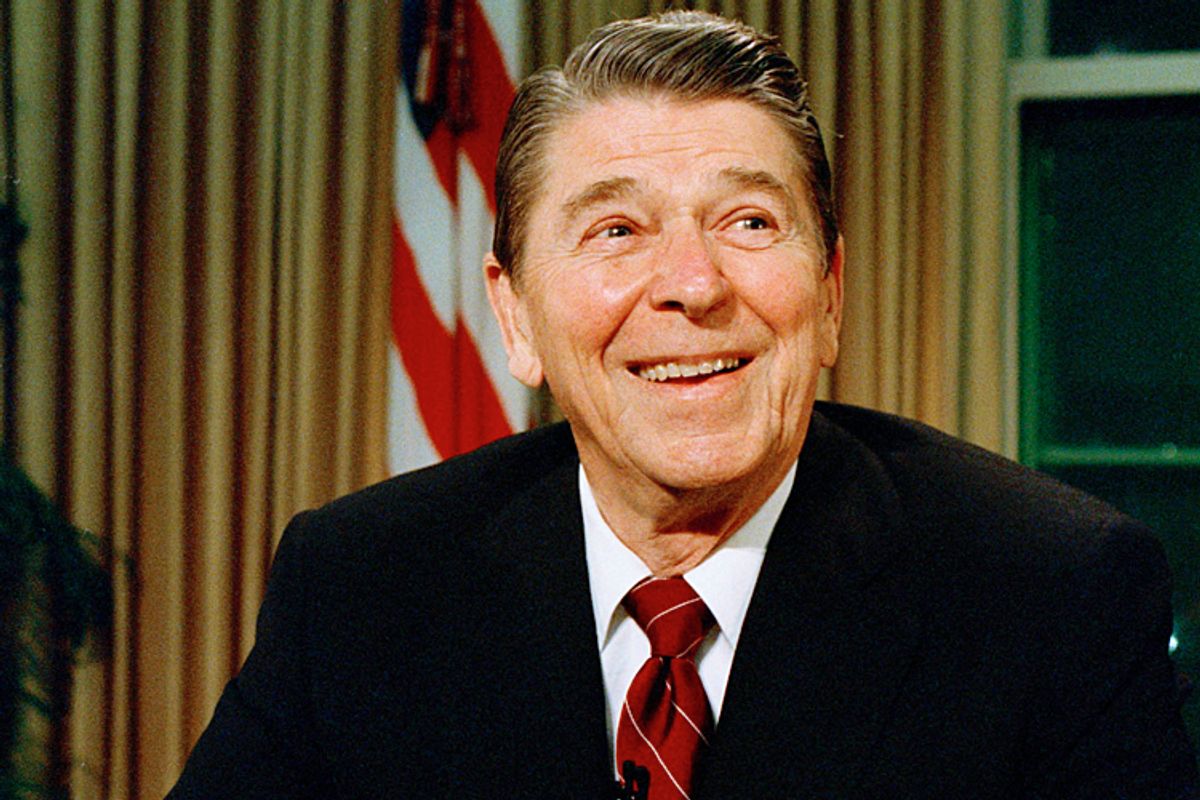 The results of a new Gallup poll released Monday reveal an unfortunate yet wholly unsurprising fact: The most commonly offered positive statement about the Republican Party continues to be its capacity for “better fiscal management.”

While not unexpected, it’s an absolutely baffling, incredible position, noteworthy even when held by an admittedly slim plurality of the public. Considering the enormous damage the Republican brand has taken recently, it’s significant that voters still reflexively assume conservatives are “better at” or more “serious about” the economy than liberals. (At the same time, voters reflexively assume that liberals care more about “people like me.”)

Still, the notion that our economy would be healthier if it were managed by Republicans — who advocate implementing a ludicrous, crippling austerity package that falls disproportionately on the shoulders of the poor and middle class — the damning evidence notwithstanding, is left completely unexamined everywhere, the focus falling instead on the poll finding that showed bipartisan distaste for Republican intransigence.

When the press fails to even comment on the laughable notion that Republicans are inherently good fiscal managers, it creates a space where their discredited economic philosophy can be accepted without discussion -- implicitly maintaining Reaganomics’ 30-year Jedi Mind Trick over the American people and our docile political press. “Reaganomics,” more commonly referred to these days as “supply-side economics,” “trickle-down economics” and “neoliberalism,” is dangerous both in the power that it continues to wield over its adherents (who follow its precepts with a rigidity bordering on extremism) and duplicitous in its use of esoteric arguments to prop up its counter-factual vision of the world. It has done more damage to the world economy over the last 30 years than any single country, criminal enterprise, rogue nation or corrupt and incompetent bank, and unlike fascism or communism, the seat of power for neoliberal doctrine exists right here, in the good ol’ U. S. of A.

While supply-side’s greatest influence holds in the vertiginous landscape of Lower Manhattan, that imposing canyon of glass and steel, it manages to wield enormous power in both houses of Congress, in the ivory tower of academia, and firmly within the conservative media landscape that consumes so much of America's national attention. Amazingly, the most basic precepts of neoliberal thinking — banking, financial and currency deregulation, extreme cuts to corporate and top marginal tax rates, and wide-ranging free-trade agreements — have been completely ineffective at providing their stated goals when broadly implemented. Nearly every time these prescriptions have been advanced, they’ve caused an array of catastrophic policy failures, and as a result, enormous economic destruction, sometimes globally.

While those who adhere to supply-side principles might point to a brief period of economic growth during the Reagan administration as proof of the success of their policy prescriptions, or perhaps instead argue that their economic agenda has never been fully implemented, neither of these arguments can stand up to careful scrutiny. The economic results of neoliberal policies have been consistently devastating, and their failures immediately apparent. Examples abound: the Argentine currency collapse from '99-'02; the East Asia Crisis of '97; the “Shock Therapy” technique in post-Soviet Russia; the Bolivian Water Crisis of 2000; the collapse of the Mexican Peso in '94; the Subprime Mortgage Collapse of '09 ... The list goes on and on. Supply-side ideologues refuse to accept this most basic reality: Their principles are fundamentally flawed and do not work. To continue to base our economic policy, our regulatory policy and our financial policy on their misguided assumptions makes about as much sense as adopting the governing principles of the CCCP.

And yet the neoliberal agenda still holds enormous influence in the halls of power of the United States and abroad. Even the (relatively minor) decision to highlight the fact that these policy proposals often encourage amoral behavior is tantamount to career suicide.

If all regulation were evil, and all taxes were bad, one would imagine the economy might have fared better in the Bush years, to point to just one example where the promises of the right’s dogma fail to comport with reality. Even so, evidence-based criticisms of this doctrine’s widespread influence are routinely mocked, or serve to mark an individual as not “serious,” even as examples abound of supply-side’s influence within the corridors of American power: the doublespeak “Chamber of Commerce,” charged with lobbying Washington on behalf of big business; professorial economists at universities, newspapers and think tanks, who mold the minds of our future leaders, and dictate the range of acceptable discourse among "serious" individuals; investment bankers and hedge fund managers on Wall Street; individuals shaping policy at the International Monetary Fund and World Bank, who direct the borrowing policies of the developing world; CFOs and CEOs, and other captains of industry, who spend untold millions shaping our political discourse and discouraging unfavorable discussions; even many of those charged with crafting the regulation, or writing the laws that should help foster competition and prevent corruption are held in the thrall of supply-side's seductive song.

Until this culture is changed, America will remain in the grips of a group of extremists as dangerous as the worst political parties of the last century, who believed, much as many on Wall Street do, that the favorable view of history will justify all of one’s current moral indiscretions. Such extremist thinking is dangerous, as it allows for a near-limitless supply of moral relativism.

How did we get here, so far removed from the practical and successful Keynesian economics of the mid-20th century? At the time, we had an economic policy that helped usher in the greatest period of growth in American history, which correlated with the smallest gap between the rich and poor — a whole raft of the positive results of sound liberal economic policy. What have 30 years of conservative policies brought? A larger gap between the richest and poorest Americans than has existed at almost any other time in our nation’s history. Stagnating wages for all but the wealthiest Americans. Increased hours, decreased benefits and enormous public debt caused by a financial crisis that was the direct product of the radical deregulation of our financial markets.

In short, we allow extremists to write policy, to benefit the few at the expense of the many, and working-class Americans are left with the bill. We allow the wealthiest among us to hide behind a self-serving ideology that masks the true nature of their avarice and greed.

Supply-side economics simply do not work, and theoretical arguments to the contrary ignore an unseemly amount of the historical record, and by extension, factual reality. In American politics, it is essential that those of us who do not directly benefit from these destructive policies support elected officials of all parties brave enough to accept the facts. It's telling that some of the loudest and most well-spoken recent proponents of more equitable policy platforms are conservative writers who value facts over dogma, writers like David Frum and Josh Barro. These individuals should be applauded for their willingness to question received wisdom that is deeply held on both sides of the political aisle, flawed but widely accepted notions that are often taken as necessary for membership in the Beltway’s “serious class.” Even on the left, there is enormous money and influence working to simultaneously maintain the status quo while advancing the notion that the greatest threat facing America today is our debt, which can be fixed with lower taxes, decreased regulations and sharp cuts to social welfare programs, a strategy advanced by socially liberal organizations quietly funded by billionaire activist Pete Peterson, such as the Third Way and Fix the Debt.

For politicians, it’s extremely difficult to speak out against this wide-ranging ideology and still be taken seriously: The vast influence of money in politics makes the range of acceptable discourse extraordinarily narrow. The game's been heavily stacked in favor of the wealthy ideologues, who seek to extract the most resources from this country while paying the least back. Only by challenging supply-side assumptions at their core can we hope to have politicians who will enact meaningful, strong reforms that might serve to prevent — or at least mitigate — another economic disaster like the last.

Far from lauding and encouraging Republicans to continue to pursue their failed policies, we should demand fresh proposals from both parties, employing strategies as inherently suspicious of neoliberalism as our political parties are suspicious of Marxism-Leninism. Ultimately, we should be trying to turn our economy back into a healthy, powerful engine of prosperity that works to expand the wealth and opportunity of all its members, and not simply those at the very top.