After the "Rack City" rapper got booked for a performance, senior Leah Reis-Dennis started a campuswide protest 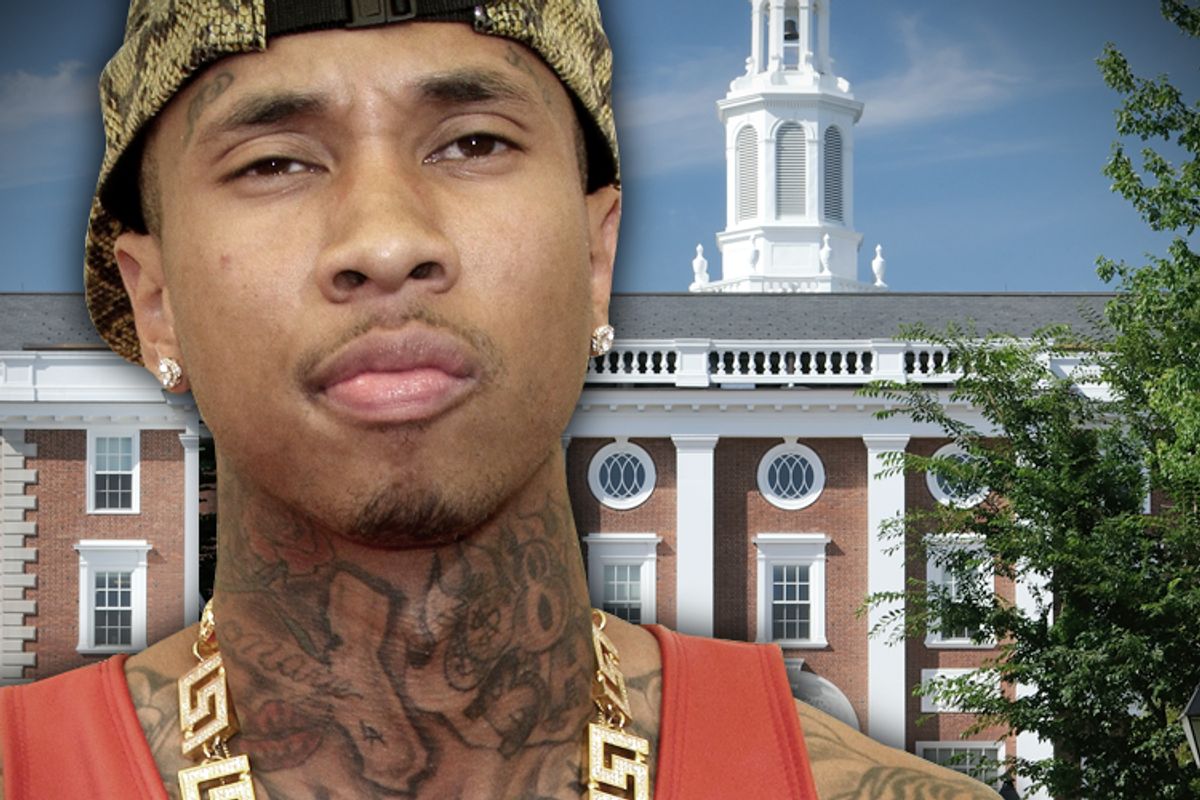 The rapper Tyga is booked to perform at Harvard's Yardfest, an annual event that has previously hosted acts including Wu-Tang Clan, Busta Rhymes, Third Eye Blind and Kid Cudi.

That is, he's booked for now: Harvard's Office of Student Life has requested that the students organizing the concert reconsider the booking after an anti-Tyga petition garnered over 1,000 signatures. The office, though, is leaving the decision to the student-run College Events Board.

This isn't just a case of students who wished they'd gotten the chance to see Lana Del Rey or Macklemore. Tyga's lyrics, says Harvard senior Leah Reis-Dennis, promote rape and violence. A video for his hit single "Rack City" is below:

"A Yardfest without any big-name headliner would be better than a Yardfest with Tyga's lyrics that promote sex and violence," said Reis-Dennis, who started the petition after finally listening to Tyga's lyrics with a group of friends in the dining hall. The petition garnered 1,000 signatures within "a few hours," said Reis-Dennis. It's now up to nearly 1,850, though the change.org platform is not limited to Harvard students.

Reis-Dennis, despite her sudden awakening in the dining hall, had been passingly familiar with Tyga's music. "I, personally, have danced to Tyga's 'Rack City' hundreds of times at parties without listening to the lyrics," said the history and literature concentrator. "When I listened to them, I was pretty embarrassed."

Those lyrics include, "Ten, ten, ten, twenty on yo' titties, bitch" and other references to Tyga as, alternately, a client of sex workers and their pimp.

The booking came at a particularly tense moment as regards rape in America, Reis-Dennis pointed out. "There's been a lot of movement this year in fighting against rape culture, from Steubenville and the trial there to recent accusations regarding the UNC administration not adequately responding to a rape case." Predictably, the petition has seen some pushback, with writers and commenters for a Boston sports blog using homophobic slurs against Reis-Dennis and other signatories.

Reis-Dennis, who is involved with a campus group that combats rape culture, said she was optimistic that the Tyga performance would be canceled -- "I think student sentiment is on our side" -- but was careful to stipulate that she is hardly an opponent of all hip-hop music.

"Tyga is not representative of hip-hop as a whole or what hip-hop can and should be," she said. "Frank Ocean is available to campuses for a similar rate."