Mrs. Jay-Z is concerned about an "extreme" label 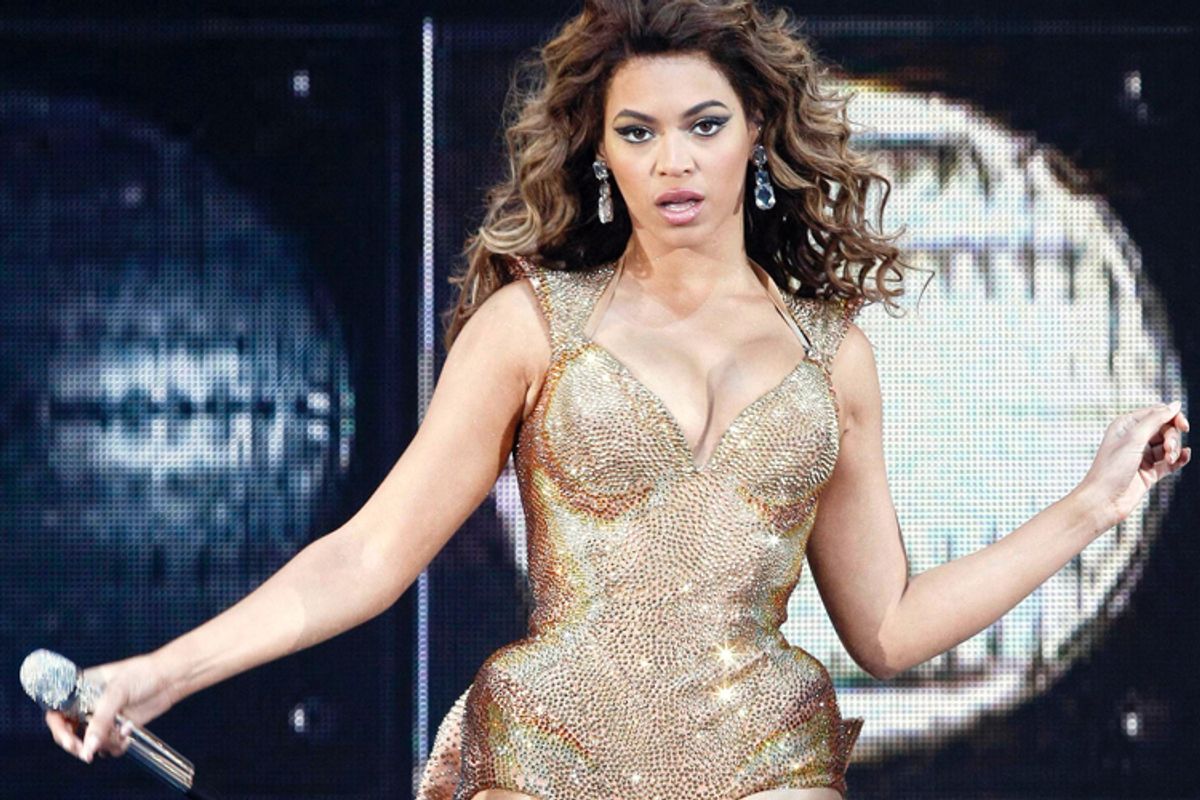 It should come as no surprise that Beyoncé calls herself a feminist. She's self-made, successful and possesses a song catalog that reads like a lady empowerment playlist. What's unusual is the lengths to which Ms. Sasha Fierce herself will go to walk back that simple statement.

In a new interview with British Vogue, the 31-year-old hedged when asked if she considers herself a feminist. "That word can be very extreme," she said, before acknowledging, "I guess I am a modern-day feminist. I do believe in equality." Unlike those old-school feminists who are totally opposed to equality, that's what I guess. Beyoncé went on to explain, "I do believe in equality and that we have a way to go and it's something that's pushed aside and something that we have been conditioned to accept. But I'm happily married. I love my husband. I feel like Mrs. Carter is who I am, but more bold and more fearless than I've ever been."

Beyoncé's remarks are forehead-slappingly familiar. Last year, while receiving an award for Billboard's Woman of the Year, Katy Perry seized the moment for her gender to assure humanity that "I am not a feminist," adding as a side note, "but I do believe in the strength of women." This was around the same time that supermodel/former first lady of France Carla Bruni announced that "We don't need to be feminist in my generation."

Ladies, it is OK to say that you're a feminist, full stop. You don't have to twirl your hair and stamp your toe delicately into the ground and sweet-talk that maybe you guess it's OK that men and women be treated equally. We even have laws about that sort of thing, so it's acceptable to support the idea. It is not extreme to believe in equal pay or reproductive autonomy or protection from abuse and it is not extreme to have a word for that set of beliefs. It does not make a woman some hairy-knuckled, man-hating she-beast. It does not and should not be considered a diminishment of her femininity or an indictment of men to say, "I'm a feminist." You don't have to be afraid that you will somehow undermine your va va voomy image.

Beyoncé is clearly trying to make a point about pigeonholing ourselves when she asks Vogue, "Why do you have to choose what type of woman you are? Why do you have to label yourself anything? I’m just a woman and I love being a woman." And she certainly understands how limited and unimaginative public perception can be. She asks, "If you’re attractive then you can't be sexy, and you can’t be intelligent? What is all of that?" It's a problem that was magnificently exemplified earlier this week in the New York Times' bonkers obituary for Yvonne Brill, in which, as Times public editor Margaret Sullivan later explained, the author hoped "the references in the first paragraph to cooking and being a mother served as an effective setup for the 'aha' of the second paragraph, which revealed that Mrs. Brill was an important scientist." AHA! A woman can cook and do science! A woman can be sexy and intelligent! Shut up!

Speaking of conjunctions, there is a difference between an "and" and a "but." To say you believe in equality BUT you're happily married, or conversely, that you're not a feminist BUT you believe in equality is to put a whole lot of reservations around your position. That's why it's odd that Beyoncé has no trouble saying, "Mrs. Carter is who I am," but reluctantly wears the label "feminist." And if, in the 21st century, there are people who find the word "extreme," frankly, I think the woman who coined the word "bootylicious" should be the first in line to say to hell with that.