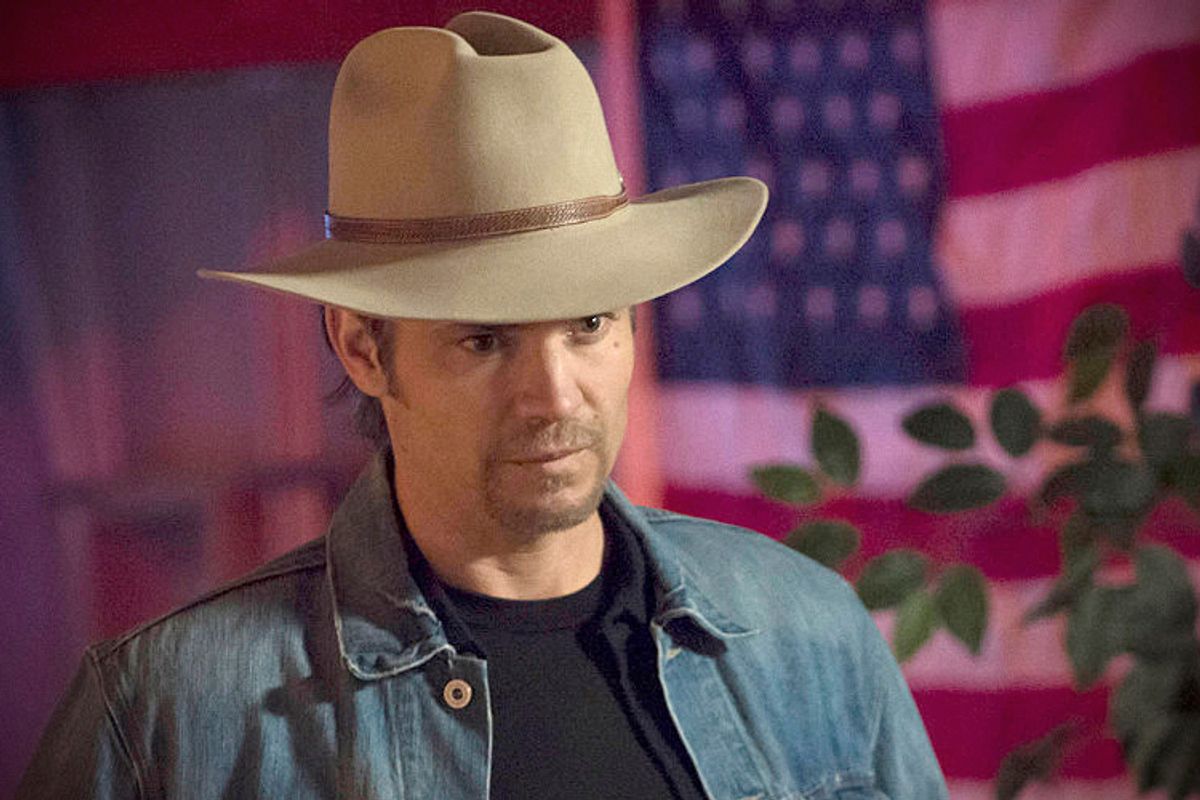 “Justified” ended its fourth season last night, with an action-packed yet melancholy episode, a feeling coda to an at times cheeky season. Last week, in the penultimate episode, the last threads of the season’s major mystery — who is Drew Thompson? — got tied up. Shelby and Ellen May were safely taken into the marshal’s custody leaving the finale to focus on the personal lives of the show’s two main men. Raylan puts together a body count of at least three, but successfully protects Winona and his unborn child from harm, only to end up alone staring at his father’s fresh grave. Boyd, scrambling to get rid of an old corpse so Ava won’t go to jail, fails, and finds himself alone, finally in charge of Kentucky’s heroin trade.

The thing that's so great about “Justified” is how it has rejected some of the pressures to be just like every other "serious" antihero drama on TV. It’s always been a little shaggier, funnier, more procedural. (Its second season, the one with Margo Martindale, was its most acclaimed, but it has never gone back to that well entirely: Each season since has had a long-term story arc, but they’ve been broader and punchier than the Mags story line.) It’s also been willing to inhabit a more total moral ambiguity — not the kind so in vogue where the characters break really, really bad and we, the audience, have to wrestle with our sympathy for them, but where the characters teeter on the edge, bad but with standards. It’s a world where people do terrible things, but they're not quite monsters. Raylan wears a white hat, but he's all gray.

Last night, to protect Winona, Raylan essentially organized the mob killing of Nicky Augustine. (At the end of last week's episode, I was worried Winona was going to die: I'm glad "Justified" isn't that show.) He told himself, and us, that since he’d offered Nicky an out — if he’d let himself be arrested Raylan would have taken him in — it was fine that the mob shot up his limo. Raylan did what Raylan does, protect people and kill people. He’s not the same as Boyd, but one does wonder, as Boyd does, quite what Raylan tells himself to imagine that he’s the good guy, to imagine that he’s not at all like his father.

Boyd also spent the episode trying to protect his woman, Ava, but he fails. Ava gets busted trying to move Delroy’s corpse, a sting that was meant for Boyd, but catches her instead. Boyd’s endless options and plans and sweet talk finally run out. Their dreams of starting a fancy new life on dirty, dirty money are temporarily dead. Last week, Ava stepped off the “are you a fundamentally bad and violent person?” ledge when she couldn’t shoot Ellen May. Now Boyd, humiliated and alone as he is, is free and about to become super-rich, while Ava's going to jail for a murder that, in the scheme of "Justified," was almost just. TV shows have become expert at making us feel bad for the bad guy, but "Justified's" one of the few that reminds us we can feel even worse for the not-so-bad guys.