Rutgers coach may lose his job 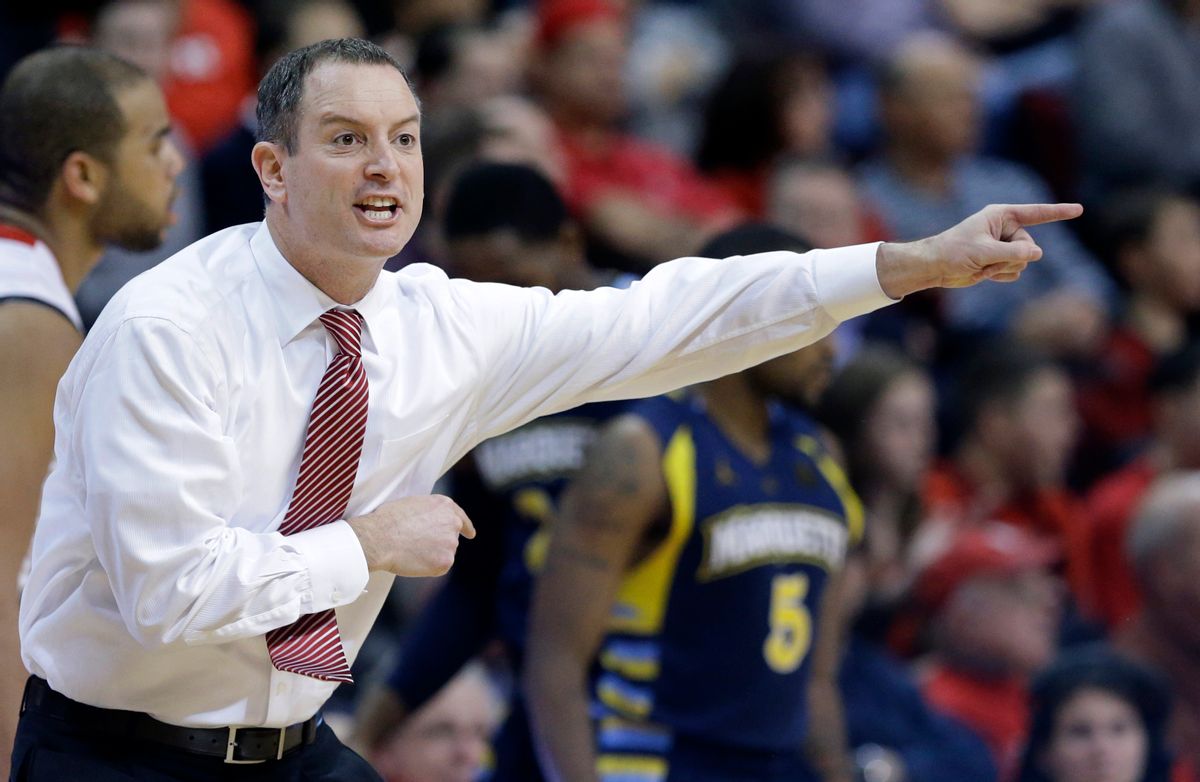 NEWARK, N.J. (AP) — Rutgers officials had already seen the video showing coach Mike Rice shoving, grabbing and throwing basketballs at players during practice and yelling gay slurs at them before it was aired by ESPN on Tuesday.

The school punished Rice in December, suspending him for three games and fining him $50,000.

Now that the video has gone viral, many — including the governor of New Jersey — are wondering why Rutgers let Rice keep his job at all.

Athletic director Tim Pernetti said Tuesday that the school was reconsidering its decision to retain the fiery 44-year-old coach.

The videotape, broadcast Tuesday on ESPN, prompted scores of outraged social media comments as well as sharp criticism from Gov. Chris Christie and Miami Heat star LeBron James. The head of the New Jersey Assembly called for Rice to be fired.

Pernetti was given a copy of the video in late November by a former employee. In addition to the suspension and fine, Pernetti ordered Rice to attend anger management classes.

In an interview with WFAN Radio in New York on Tuesday, Pernetti said university president Robert Barchi also viewed the tape last fall and agreed with the punishment.

Phone messages left for Rice by the AP were not immediately returned.

But ESPN's broadcast prompted an outcry.

"Governor Christie saw the video today for the first time and he is obviously deeply disturbed by the conduct displayed and strongly condemns this behavior," spokesman Michael Drewniak said. "It's not the type of leadership we should be showing our young people and clearly there are questions about this behavior that need to be answered by the leaders at Rutgers University."

James weighed in with a tweet: "If my son played for Rutgers or a coach like that he would have some real explaining to do and I'm still gone whoop on him afterwards! C'mon."

The video shows numerous clips of Rice at practice firing basketballs at players, hitting them in the back, legs, feet and shoulders. Rice was also shown pushing players in the chest and grabbing them by their jerseys and yanking them around the court. Rice could be heard screaming obscenities and gay slurs at players.

Assembly Speaker Sheila Oliver (D-Essex/Passaic) called Rice's conduct "unacceptable not only at our state university, but in all circumstances. It is offensive and unbecoming of our state."

"Mike Rice should no longer be employed by Rutgers University," Oliver said. "He must go. Meanwhile, the decision not to dismiss him last year needs a complete and thorough review."

"You have to be always cautious about public reaction, because the reaction the public is having is the same I had when I saw it (the film)," Pernetti told the radio station. "I am factoring everything into what we do going forward. The most important thing I am factoring in is trying to make sure that we don't do harm to Rutgers University, because we are a small slice of the pie here at this great place. I don't want to put any negatively on the university when we have a lot of real good things going on."

Pernetti said he understands why many are asking why Rice wasn't fired after the initial investigation.

"I spent more time with that option on whether we should fire Mike or not than any other option," he said. "At the same the results of the investigation where we ended up, the determination was made to suspend him. My biggest concern as the AD is that I am always trying to protect the interests and reputation of the university and that's what makes this one so difficult. There is a lot of hindsight ... that there will be no other option than to terminate Mike. I made that decision. I am accountable for it. I have to live with it."

Rice was Pernetti's first major hire after getting the AD's job.

Assemblyman Reed Gusciora (D-Mercer/Hunterdon) called Rice's conduct indefensible, and said he should have been fired in December, after the tape was given to Pernetti.

"If the university does not act, I will seek to add a provision to the state budget defunding Mr. Rice's salary," Gusciora said. "Taxpayers should not be paying for this behavior."

Pernetti said his decision to only suspend Rice was made in part because the coach was remorseful and admitted he made mistakes. Pernetti said Rice also worked hard to improve himself with the counseling.

Rice had a reputation as being "a fiery guy with an edge" before coming to Rutgers and Pernetti said the two talked about it for five hours before he was hired.

"He convinced me he understood his reputation, but he also understood where the line was," Pernetti said. "I made clear to him if he crossed the line he would be held accountable. In this case he did, and we held him accountable for it."

That might not be enough in the wake of the video made by Eric Murdock, the former NBA player who was hired by Rice to be director of player development.

The two had a falling out over Murdock's appearances at a camp, and Pernetti said Murdock's contract was not renewed. Murdock, who said he was fired, then compiled the video, splicing together the practice lowlights of Rice's first three years as coach.

Pernetti said about 60 percent of the incidents happened in Rice's first season. He also was upset with Rice using a certain gay slur at a university where student Tyler Clementi committed suicide after a roommate used a webcam to spy on him with another man.

"I would tell you that that word was at the core of the suspension," Pernetti said. "It absolutely concerns me. It's not acceptable."