While Washington "wise men" push cuts to Social Security, the real way to help America is to expand the program 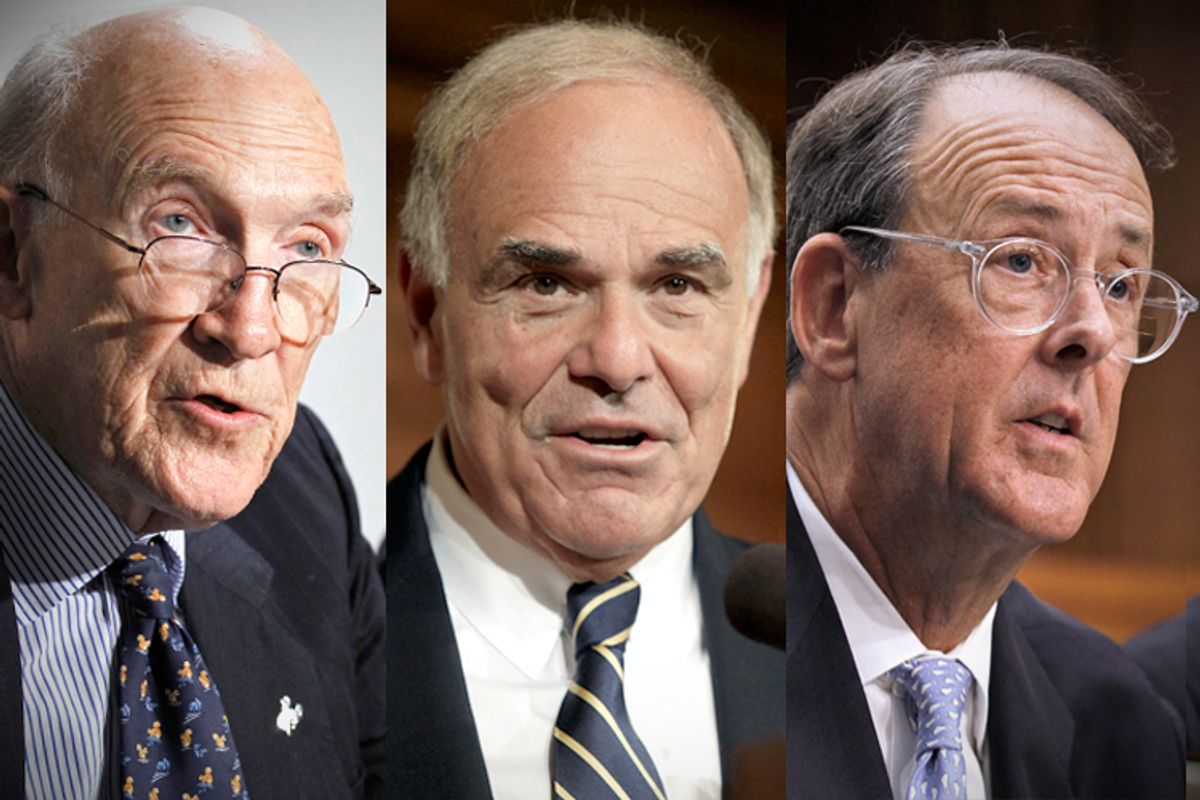 Nowhere is the gap between the needs of the majority and the preferences of the 1 percent greater than in public discussion of Social Security. The rules of the national debate rig the discussion in advance, to the detriment of most Americans and to the benefit of the rich and the financial industry.

The first rule of the rigged retirement security debate is that we, the people, and our elected representatives are allowed only to debate purely public retirement benefits, like Social Security and, for the poor, Supplemental Security Income. According to the rules of the game, we are not allowed to mention or criticize the oceans of money in tax-sheltered private savings accounts that disproportionately benefit the rich — nothing to see here, folks, move along!

The rigged rules of the Social Security debate, furthermore, do not allow any participant to suggest expanding rather than cutting public retirement benefits — why, that’s crazy talk! Only cutting Social Security or, at most, maintaining promised benefits will even be considered as policy options. At the same time, players in the Elite Entitlement Debate game are allowed, indeed, encouraged to propose further expansions in our already-enormous tax-favored private retirement savings programs like 401Ks and IRAs. Calling for combining cuts in Social Security with more tax giveaways for savings, mostly to the rich, proves that politicians are Very Serious People to their Wall Street donors and to the mainstream media pundits who lionize the conservative deficit hawks Alan Simpson and Erskine Bowles.

This rigged elite game explains the perverse political situation we find ourselves in. The conservatives and libertarians demand that Social Security be completely abolished. Progressives reply, “Please don’t abolish Social Security completely — would you please consider letting us help you cut it instead?” Playing the role of the wimpy progressive begging for mercy from the hard right, President Barack Obama reportedly may call for cutting Social Security for 80- and 90-year-olds by means of “chained CPI” in his forthcoming budget.

FixtheDebt, one of the “astroturf” (faux-grass roots) anti-entitlement front groups created by right-wing billionaire Pete Peterson and funded by corporations, many of them in the finance industry, is spending tens of millions of dollars in a short time to pressure the public and lawmakers into cutting Social Security and Medicare. Medicare has genuine long-term cost problems (best addressed by means of all-payer price regulation), but why the pressure from Peterson and many of his fellow plutocrats to cut Social Security? If you want to know the answer, follow the money.

As Felix Salmon noted of the FixtheDebt manifesto by the front group’s allied CEOs, “the letter basically just says 'please cut our taxes, raise taxes on everybody else, and cut the benefits they get from Medicare, Medicaid, and Social Security, which are programs we individually don’t rely upon'. It’s gross self-interest masquerading as public statesmanship.” But the money trail doesn’t stop there.

Cutting Social Security is backdoor privatization — and a bonanza for Wall Street money managers. Cuts in promised Social Security benefits, whether from chained CPI, a higher retirement age, or means-testing, will force middle-class and working-class Americans to try to save even more money in the tax-favored private savings accounts like 401Ks so beloved by the Wall Street financiers who fund both Democrats and Republicans. Working Americans will be invited to do so, by means of tax incentives, or forced to do so, by means of compulsory savings mandates (a possibility opened up by Obamacare’s individual mandate forcing Americans to purchase private health insurance from for-profit companies). The result: enormous torrents of money from middle-class and working-class Americans would be steered into for-profit mutual funds, for-profit annuities, and other for-profit private retirement savings vehicles, from which the financial middlemen can skim off even more fees and bonuses. In the for-profit money management industry, the mere prospect of cuts in Social Security triggers the sweet sound of cash registers:  Ka-ching, ka-ching, ka-ching.

Dozens if not hundreds of lobbyists, think tank experts and academics are being paid by Pete Peterson and other financial industry magnates at this very moment in Washington, D.C., and elsewhere to promote the party line. Fortunately, not all prominent pundits and journalists are willing to parrot the propaganda talking points — “generational warfare,” “shared sacrifice” -- that are cranked out on a daily basis by the well-funded anti-Social Security lobby. In recent weeks, we’ve seen several examples of prominent opinion journalists boldly questioning the anti-Social Security campaign.

On the left, Duncan Black, who blogs as “Atrios,” laments: “sadly the leftmost position generally in Congress is to demand no cuts to the program. There isn't yet a movement to expand them.” He points out the fallacy of the conventional wisdom that holds that the answer to retirement security consists of even more tax subsidies and incentives for private savings:

We can goad and cajole people into saving. We can provide incentives for people to save for their retirement, and penalize them for raiding those funds before they retire. We can subsidize employer contributions to retirement funds.

But we have been doing all of these things for decades, and they haven't worked. The majority of people nearing retirement will not have sufficient funds to retire with anything resembling economic security and comfort.

The default assumption in Washington is that Social Security needs to be cut to fix our long-term budget problems. But it's really a question of priorities. Social Security is, by definition, an efficient program: About 98 percent of its costs go out in the form of benefit checks, which the beneficiaries spend on whatever they value most. If we raise taxes on the people who would gain from increased benefits and cut in areas like Medicare, where the government buys a lot of things we don’t really need, we can afford to augment the federal role in retirement saving and alleviate the problem of retirement insecurity.

In the neoliberal center, as it were, Slate’s Matthew Yglesias  has dared to question sacrosanct Petersonite dogma:

So defined benefit pensions are dying off. One natural substitute is tax-preferred individual savings vehicles like the IRA and the 401(k). Those have some conceptual virtues, but also considerable practical drawbacks since they've created a vast rent-seeking market in extracting management fees from careless middle class savers. They also have a lot of undesirable instability. I retire comfortably in March of 1999, you retired wiped out in March of 2001.

The natural supplement to the problems with individual retirement savings and substitute for the problems with defined-benefit corporate pensions is a large public sector program. Every working person gets a bit less take home pay than they would have otherwise had, but in exchange gets a guaranteed annuity when they're retired. And fortunately for us we have a program that's already more or less structured like that. It's called Social Security. And as the defined benefit pension paradigm fades away, the natural and proper thing would be to rely more on Social Security as a vehicle for ensuring adequate living standards for senior citizens. The fact that this is happening more or less simultaneously with a demographic transition in which the elderly will be a larger share of the population is interesting, but doesn't fundamentally defeat the analysis.

Coming from different parts of the political spectrum, these writers look at the same facts and come to the same conclusions: Social Security should not be cut. It should be expanded.

This is the first in a three-part series.