Did conflicts of interest by Republican A.G. Ken Cuccinelli and prosecutor Marsha Garst play a role in dismissal? 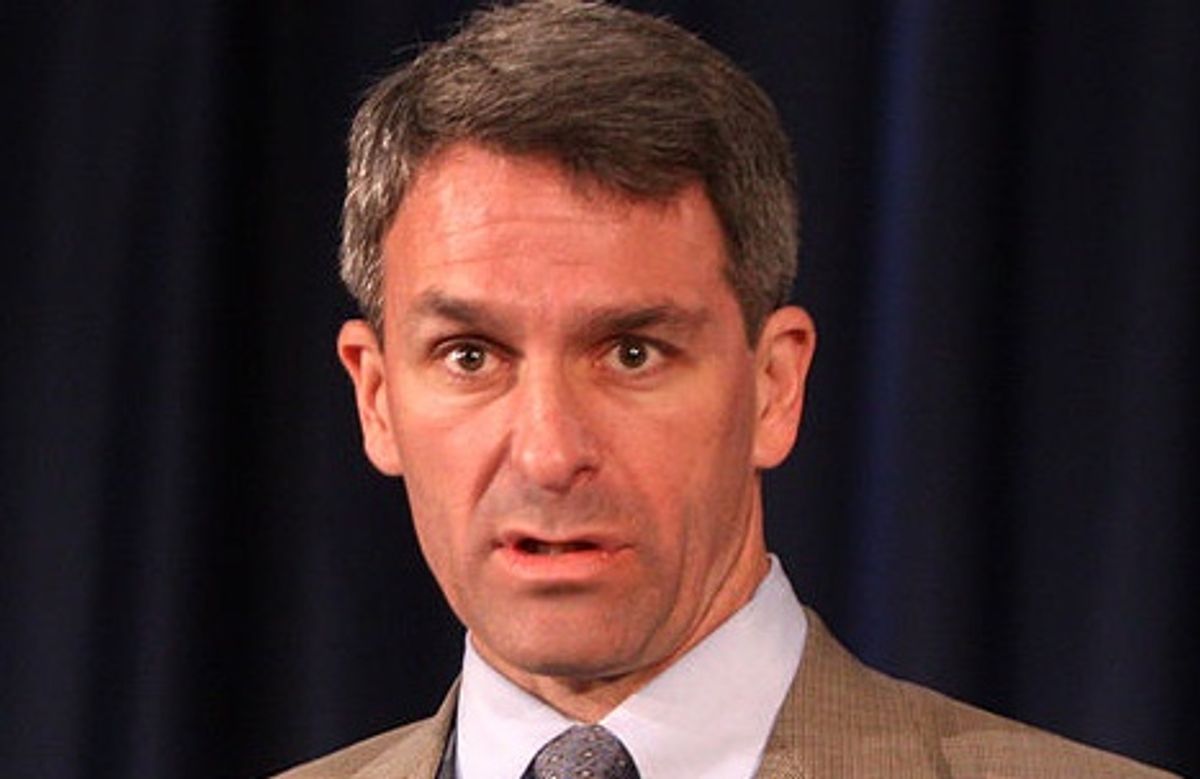 Given the professed concerns about election fraud among Virginia Republicans, it seems somewhat astonishing that the man at the center of the Commonwealth's most notorious fraud scandal last year seems to be getting off the hook after initially being charged with 13 criminal counts including eight felony charges.

Small was arrested and charged with 13 counts -- including destruction and disclosure of voter registrations, as well as obstruction of justice -- in Harrisonburg, Va., in the run-up to the presidential election last year, after he was seen by a local shopkeeper throwing away a bag of registration forms behind his store. Small's felony charges were all dropped on Tuesday, according to local Fox affiliate WHSV.

The case had garnered a great deal of national attention last fall --- almost everywhere but on Fox News --- as it emerged at the pinnacle of an embarrassing nationwide GOP voter registration fraud scandal, which plagued the Republican Party in the weeks just prior to the November general election.

The prosecutor on the Small case is Republican Marsha Garst. Unlike other Commonwealth attorneys, observed a local Democratic-leaning political muckraker yesterday, Garst failed to recuse herself from the prosecution despite what would appear to be very clear conflicts of interests in the case.

The newly dropped charges appear in stark contrast to Garst's declarations last year, when she told the Washington Post on the Friday before the Tuesday presidential election that the matter was "a very important investigation to the state, and we intend to prosecute Mr. Small to the fullest extent."

Last year, in the run-up to the November presidential election, a widespread voter-registration fraud scandal hit the Republican Party after hundreds of fraudulent forms were first discovered in Palm Beach County, Fla. They had been turned in to the county by the Republican Party after being collected by a firm they had hired to carry out voter registration across the state.

When other apparently fraudulent forms were discovered soon thereafter in nearly a dozen other Florida counties, and then in other key swing states around the country where the same company had been hired to work, the Republican National Committee fired the firm they had hired for voter registration and outreach in those states.

The firm, Strategic Allied Consulting, is said to have been created at the request of the Republican National Committee by Nathan Sproul, a longtime GOP operative with a long and checkered history with the party. Employees of his companies have been accused of various registration fraud schemes on behalf of Republicans in a number of states, during elections going back as far as 2004. Yet, despite those incidents -- and the years during which Republicans were pretending that the progressive community organization ACORN was committing voter fraud (they never were) -- Sproul was hired once again by the Mitt Romney campaign as a consultant in 2012, and later by the RNC itself. The RNC, however, reportedly asked Sproul to create the company without his name attached to it, due to his history. Sproul confirmed that point directly to The Brad Blog last year.

Small, who had initially been hired by Strategic, continued working for the Republicans in Harrisonburg (in Rockingham County), even after Sproul's firm was supposedly fired by the RNC in the wake of the registration fraud scandal.

After Small's arrest, when Virginia's Republican Attorney General Ken Cuccinelli announced his office would be investigating the matter, The Brad Blog detailed some of the A.G.'s own conflicts of interest in the matter, as he was seen in photographs with Small at the Harrisonburg GOP's "victory office" just days earlier.

That apparent conflict of interest seems to have continued into the local prosecution of Small, according to Ben Tribbet of the "Not Larry Sabato" blog, who reports that Garst "chose not to hand the case to a prosecutor from a neighboring jurisdiction of a different party -- something often done in Virginia when a case involves local political figures as this one does."

"Notice the charges were dropped -- not dismissed by a judge," observes Tribbet, "so that decision came from Garst and her office." Other media accounts, based largely on commentary from Small's attorney, report that the charges were dismissed by the judge. Still, Tribbet offers a compelling case for his allegations that Garst's office has conflicts of interest that may have affected its prosecution of the case.

[Garst has not immediately responded to The Brad Blog's request for comment on the matter. We will update this post when/if she does.]

Tribbet, citing the WHSV report, notes that "Small's defense was he thought the people who filled out these forms were 'already registered.' So he drove to a random dumpster to throw them out instead of just putting them in the trash at his office? This doesn't pass the laugh test."

The political blogger goes on to detail another recent case -- involving an apparent attempt by an employee of a Republican state senator to steal data from a rival GOP operative's cellphone -- in which Garst also failed to pass the case on to a neighboring prosecutor. She ended up not prosecuting the employee, "despite federal guidelines on the value of political data that would clearly indicate that stealing a phone to access that data would be a felony under Virginia law."

That's not the way prosecutions are supposed to work in Virginia, writes Tribbet, offering a quick summary of recent cases in which other Republican and Democratic prosecutors have recused themselves from cases where they had similar apparent conflicts:

In recent cases in Albermarle County involving Supervisor Chris Dumler the local Democratic prosecutor sent them to neighboring GOP prosecutors in Fluvanna and Lynchburg. When Michael Gardner, a former Democratic chairman in Falls Church was charged with sex crimes last year, his case was sent from the Democratic Commonwealth's attorney office in Arlington to a GOP one in Loudoun. When Loudoun Supervisor Eugene Delgaudio was put under investigation, the GOP prosecutor in Loudoun sent the case over to Arlington's Democratic office. What exactly does Marsha Garst not understand about these types of conflicts and the need to recuse herself?

Tribbet also points out that "One of Garst's chief deputies is also a member of the Virginia legislature and head of the conservative caucus," which is, he says, "Yet another reason why Garst should be sending these cases to another office to handle."

She is also an active member of the local Republican Party --- on whose behalf Small had been working at the time of his arrest --- as highlighted in an article by the Virginia Conservative blog.

Garst is cited in the piece as one of a number of high-ranking Republicans who attended a fundraiser BBQ for the Harrisonburg GOP and the Rockingham County GOP in the run-up to the 2012 election cycle. According to the Virginia Conservative, "The audience brimmed with elected representatives and Republican hopefuls, a virtual who's who role call in local politics."

Indeed, many of the attendees at the BBQ were on the same 2012 ballot that Colin Small was working to sign voters up to vote for. U.S. Senate candidate George Allen, U.S. Rep. Bob Goodlatte and a host of other local politicians and candidates, including Garst, are named as having been present at the event, which "featured delicious local BBQ and a wide range of tempting desserts prepared by the Republican Women" and "an auction to raise additional funds."

Given that Small's case was among the most notorious and widely reported during the national GOP registration fraud scandal last year, it seems remarkable that Garst wouldn't pass the case over to another prosecutor without the same apparent conflicts of interest on both the local and partisan political levels.

Joseph Tanfani at the Los Angeles Times, however, describes the charges as "dismissed" by the judge, and cites a predictably downplayed version of events from Small's defense attorney John Holloran.

"He's closing his office for the day and says, 'What do I do with these?'" Holloran explained to Tanfani about why Small found a dumpster behind a strip mall to dispose of the registration forms after the registration deadline in the state had closed. "'It would look bad if someone found them in the trash can outside Republican headquarters.'"

Small will appear in court once again on April 16 to face his remaining misdemeanor charges.

Pretending to care about election fraud

There is no small irony -- or, perhaps more appropriately, hypocrisy -- in the timing of the dropping of Small's felony fraud charges. It comes just days after Virginia's Republican Gov. Bob McDonnell signed a newly restrictive polling place photo ID law under the guise of cracking down on voter fraud. That bill is the second such law to be signed by the same governor within the past year. Last year, the Republican state Legislature passed another polling place photo ID law. The new one signed last week replaces last year's law, making many of the IDs issued to meet last year's restrictions now invalid for upcoming elections.

All of that, even as a recent, exhaustive nationwide study by a nonpartisan news consortium found just 10 instances of in-person voter fraud in all 50 states since 2000 -- out of hundreds of millions of votes cast during the same period. In-person polling place fraud, incredibly rare as it is, is the only type of voter fraud that might be deterred by such laws.

Virginia's new polling place photo ID restriction, which opponents charge could result in tens of thousands of disproportionately poor and elderly (read: Democratic-leaning) voters becoming disenfranchised, was signed by McDonnell last week. His spokesman called it, according to the Nation's Ari Berman, "a reasonable effort to protect the sanctity of our democratic process."

Attorney General Ken Cuccinelli, who was seen giving a pep talk to GOP registration and outreach workers -- including Small, just prior to his arrest -- at the Harrisonburg "Victory Office" last year, is now hoping to become the next governor of the Commonwealth. His election against likely Democratic nominee Terry McAuliffe will take place this November. The new draconian polling place photo ID restriction law, however, will not go into effect in the state until the 2014 congressional midterms.

Thanks in no small part to the local Republican prosecutor in Rockingham County, however, it seems that Colin Small will apparently be more than available to work for Republicans during both of those upcoming elections.