Are female pols good for women?

As they vie for the highest jobs, it's the uncomfortable question that can't be ignored 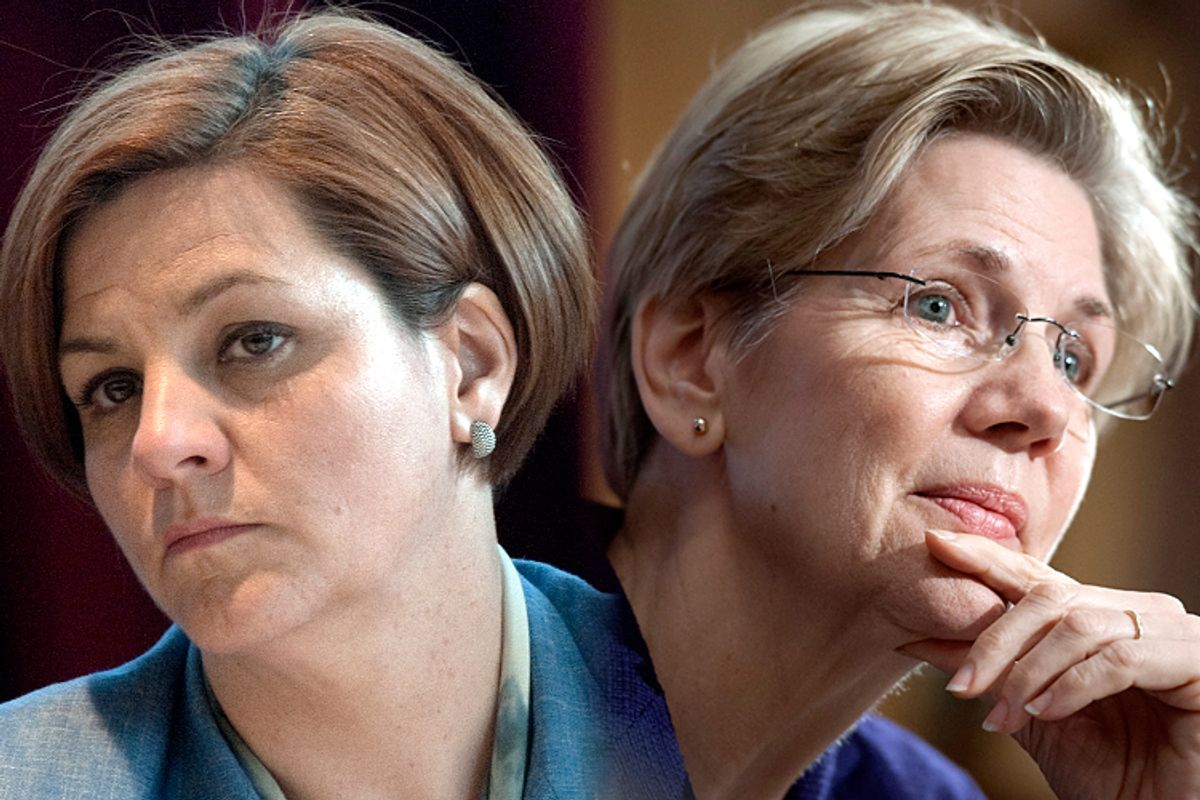 For about as long as women have been running for office, people who care about women's lot have wondered whether one at the top would improve life for the rest of us. And last week's skirmish in the New York City mayoral race was an object lesson.

The feminist bragging rights of Christine Quinn, the only female candidate in the New York race -- the front-runner, potentially the first female and the first lesbian mayor of the biggest city in America -- were being questioned. Using her power as speaker of the City Council, Quinn was blocking a sure-fire vote mandating paid sick days.

She faced a clear choice. While the bill was opposed by her key ally, Mayor Michael Bloomberg, lack of sick days disproportionately affects low-wage female workers, who also tend to have more care-giving responsibilities -- and the coalition including the Working Families Party and union leaders made sure everyone knew it. Just as Quinn needed the support of people like Gloria Steinem and other high-profile feminists for her campaign, they were holding firm in demanding a vote on paid sick leave as a women's issue. And it all came at a time when people who might vote on feminist bona fides were arguing over a central question raised by Sheryl Sandberg's "Lean In": whether more female leaders would improve the lot of all women.

The Quinn case -- she eventually blinked, and made a deal -- seems to suggest the answer could be yes. But only if there are enough women and allies who care to shame her into doing it.

"It's always been clear that making life more fair for women as a group is more important than electing a particular woman," Steinem said in an email to Salon. "So when we met about her candidacy, I told her that paid sick days were my one reservation -- not that she had to vote one way, but that she had to allow a vote." Steinem said she had originally wanted to support Quinn because "she is both good on the issues" -- including legislation forcing phony antiabortion clinics to disclose that they don't have licensed doctors on site -- "and the first viable woman candidate for Mayor."

That clearly left Quinn with no choice. It was less about a female leader standing on her own for women and more about the fact that tireless political organizing was about to undermine some of the political benefits of being a female leader. Steinem told Salon that she does support Quinn's candidacy now, and added, "I do believe that pressure from the wide spectrum of the women's movement was crucial in countering some profit-obsessed business interests."

Quinn's achievement would still be rare. While New York lags behind other cities in never having had a female mayor, nationwide, only 17 percent of mayors leading major cities are women, which is actually lower than the percentages in Congress and statewide office. Seeing mayors as a pipeline to even higher office is part of the reason EMILY's List has newly thrown itself into female mayoral races, including Quinn's, as well as races in cities like Los Angeles and Houston.

Still, Quinn has displayed some of the classic ambivalence of female candidates like Hillary Clinton, who at times seek not to be defined by their gender but inevitably find others' perceptions colored by it. “I try to not think too much about how stuff gets seen as it’s being done by a woman,” Quinn told New York magazine, in a cover story earlier this year that was, ironically, overshadowed by Bloomberg making a boorish remark about a woman's butt.

"One of the good pieces of advice somebody gave me when I was running for mayor -- when I was asked, could I go out and talk about being a woman running for office, somebody in the campaign said, you know, that's the only thing you don't need to talk about," Ruth Messinger, who was the Democratic candidate against Rudy Giuliani in 1997, and who testified in support of paid sick days, told Salon. "They could actually see that you're a woman running for office. You might want to tell them how you grew up, you might want to tell them what your views are on the issues, you don't need to tell them you're a woman. And I think Chris lives that well."

Last Thursday, on the night the deal was struck, Quinn was at Barnard College, talking about, well, being a woman running for office. "All of us I think as women struggle at times with the definitions we're given," she said. It was two days after a New York Times story that focused on her temper, which many considered sexist, so everyone knew what she was talking about when she continued, "What good girls are supposed to do, how loud you should and shouldn't be. I've lost that battle. How pushy you're supposed to be. I've lost that battle." The mostly female crowd ate it up.

Then she told a story that was supposed to be about how her grandmother didn't fit the traditional feminine norm. But it also said a lot about how Quinn views her own politics.

"I think about that good girl concept as it relates to my grandmother," Quinn said, "who literally, when asked about how she made it off the Titanic, she said, 'When the other girls dropped to their knees to pray, I took a run for it.'" The obedient girls who prayed, Quinn said, showed "the real power of what we're taught to do, who we're told we're supposed to be and how hard that is to break out of that."

It wasn't just a story about gutsy ladies. It was about having it both ways between the poles of ideological purity and political survival. That's a principle that has seemed to guide Quinn for years -- on issues ranging from paving the way to Bloomberg's third term, to stop and frisk -- including on that night. The only thing that changed was the ground under her, and the terms of survival.

She concluded her Titanic story with, "If we go out and pray while running we will create an enormous positive energy in this city that will lift up young girls and young women and other people who need to have their right to excel and their right not to be perfect affirmed in this city." It was deft: This wasn't about Quinn's arguable vindictiveness -- it was about the feminist trope of pushing back at expectations to be a good girl and to be perfect.

And her tendency toward political triangulation also became about gender, with an assist from the interviewer, Barnard president Debora Spar, who said, "We've had a couple of congresswomen and senators here and they've all said, and this a little bit of political speak but the data seem to back it up, that women are more inclined to cut across party lines, that the impetus is to get things done rather than standing for an ideological position. Have you seen that in city politics?"

"Definitely," Quinn said. "We only have four Republicans so the party line isn't a big thing at this point ... But in areas where you have one side or another side, I definitely think you see a real impetus on the part of women to bring folks together." Thus, this was no longer about political triangulation -- it was about women rolling up their sleeves and getting things done. To New York magazine, Quinn said, “What other type of business would people go, ‘Ugh! You know that woman? She’s finding a way to work with people. Oh, we gotta put a stop to that!"

Afterward, speaking to a gaggle of reporters, Quinn refused to concede that the outside pressure had swayed her, insisting instead that she had gotten the necessary concessions to protect small businesses. Though the deal she eventually brokered on paid sick leave was watered down, it left her opponents in the Democratic primary with one fewer cudgel to use against her from the left. The next day, she held a triumphant press conference.

That pragmatic politics of deal making is also what House Minority Leader Nancy Pelosi became famous for as speaker. In the Senate, the growing number of women still meet at a dinner party organized by Sen. Barbara Mikulski, where the emphasis is on bipartisanship as well as civility. Sen. Kirsten Gillibrand told the New York Times, “In the Senate you have to start with a bipartisan core to get things done, and that core is often formed with the women." Of course, that's not the only model. It's only been a few months since Elizabeth Warren joined them after soaring to stardom as an uncompromising critic of financial industry excesses, but as David Corn put it in Mother Jones recently, she faces a choice between being "a Capitol deal maker or an issues-thumping organizer," or perhaps "a third option: watchdog."

Warren brings with her unusually high hopes, at a time when fewer people expect women to be automatically kinder and purer because of their gender. Adrienne Kimmell, the executive director of the Barbara Lee Family Foundation, which conducts research on women in politics, especially in gubernatorial races, says their research has detected some attitudinal shifts among voters. "Women were perceived as being more ethical and honest, and that has consistently narrowed from when we started our research in 1998 to date," she told Salon. Voters surveyed also initially suggested that they wanted to see a woman be "tough," to "slay dragons." But, Kimmell said, "That started to shift to become more about strength and results." Asked to speculate why that might be the case, Kimmell had a theory: "Women running for office are less of a unicorn than they used to be." Only slightly.