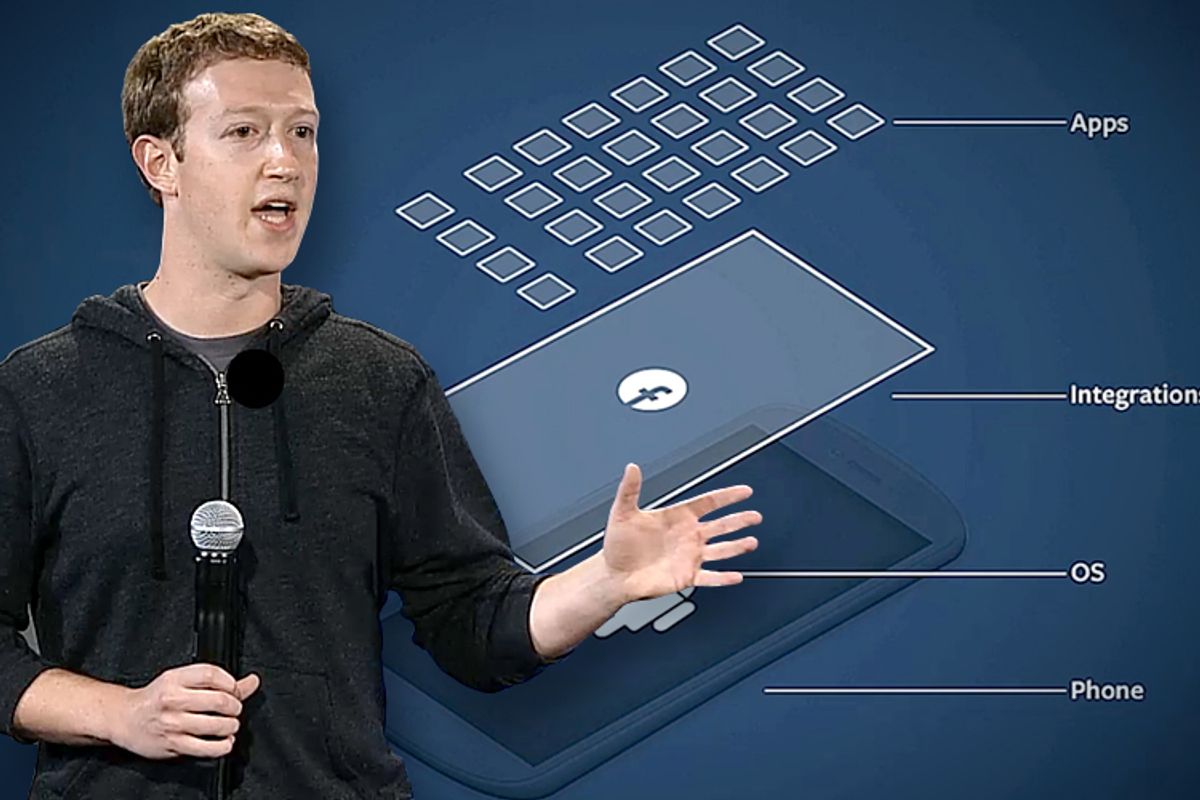 The home screen of your smartphone, Mark Zuckerberg told the world on Thursday, is the "soul of your phone." Zuckerberg then proceeded to demo "Home," Facebook's bold new plan to take over the prime real estate of all Android mobile devices, everywhere.

Q.E.D: Mark Zuckerberg wants to steal your soul. I'm surprised more of the reporters who attended the great unveiling at 1 Hacker Way in Menlo Park, Calif., Thursday morning haven't led with this tidbit in their coverage of the event.

Or maybe, considering how many reporters were actually applauding at various stages during the presentation, the truth is that quite a few members of the tech press have already surrendered their souls to Zuckerberg. Tsk tsk.

The basics of "Home" seem slick, as best I could tell from the streaming video of Zuckerberg's presentation. Think of Home as the uber app that displaces all other apps -- the one app to rule them all! After installing Home, when you turn on your Android phone (or soon, your Android tablet) the first thing you will see is a visually striking "Cover Feed" that occupies all your screen space. The Cover Feed is a gussied-up version of the familiar old Facebook news feed, filled with whatever your friends are up to in the moment: their photos, videos, status updates.

Facebook Home also appears to makes it very, very easy to carry on conversations with your friends while remaining completely inside the Facebook universe. Incoming messages resolve into "chatheads" -- icons of your friends' profile pics that you can swipe on or off with ease. But don't fret; your non-Facebook apps, Zuckerberg said reassuringly, are just one swipe away.

All well and good: If it's true that we already spend more than 20 percent of our smartphone time engaged with Facebook, then we will most likely waste even more precious minutes catching up on status updates and chatting with our friends if we choose to allow Facebook Home to conquer our screen space. I have no doubt that it will be easier than ever before to "share" and "connect" -- two activities, Zuckerberg stressed, that define our essential humanity! It's quite a pitch: Facebook Home will make it easier for us to be human.

But all I could think of, as I watched the presentation, was the inevitability that I would turn my phone on and be affronted immediately with the sight of unfamiliar, large-breasted women advertising dating services targeted at middle-aged men.

If you identify yourself as a single man on Facebook, you will be assaulted daily by a never-ending deluge of dating service advertisements that are difficult, if not impossible, to permanently extinguish. As we have journeyed deeper into 2013, these ads have become steadily more intrusive, migrating from the right-hand column of the Facebook home page directly into the flow of the News Feed, both on the desktop and the phone, along with a steadily rising tide of other "Sponsored Stories" and "Suggested Posts." I find the dating ads vaguely offensive, but also fascinating: Their ubiquity and persistence suggest that they go a long way toward paying Facebook's rent. For Facebook to succeed in justifying its market capitalization and give its investors the returns that they so dearly crave, the company must show me as many come-hither mammary glands as its infrastructure can support.

And that's what the Cover Feed is all about: bringing those ads one major giant step closer. Explain to me, again, why anyone in their right mind would want this? When we sell our souls to the devil, we deserve to get a little more out of the deal than increased exposure to commercials!

Of course, throughout the entirety of the Facebook presentation, neither Zuckerberg nor any of the other men who rhapsodized over how Facebook Home would organize your phone around people instead of apps bothered to mention the word "advertising" a single solitary time. (Although, according to Apple blogger John Gruber, after the initial presentation was over, a reporter asked if ads would show up in the Cover Feed, and Zuckerberg replied "yup.")

According to an advertising executive quoted in AdWeek, Mark Zuckerberg has said that "Facebook's advertising business doesn't impact its product design." I find that difficult to believe. Indeed, the reluctance of Facebook's executives to even mention what is clearly an important factor influencing all of Facebook's user interface changes seems at the least misleading and borders on fundamental dishonesty.

The numbers don't lie. Mobile ads are the future of Facebook. Six hundred and eighty million people access Facebook via mobile devices every month. According to one analyst, in 2013, Facebook is expected to rake in $965 million in mobile ad revenue, more than double the $391 million it harvested in 2012. In the fourth quarter of 2012, 23 percent of all Facebook's revenue came from mobile. If product design isn't being influenced by Facebook's advertising business then Zuckerberg is committing executive malpractice and should be fired, immediately.

But the fact that it is essential for Facebook to boost advertising revenue from mobile phones surely doesn't mean that we are under any obligation to give Facebook a helping hand. I accept that Facebook needs to make money via advertising. I don't accept that those ads should be part of the basic experience of using my phone for anything. And that's the most confounding thing about Facebook Home. During the presentation, Zuckerberg declared that "we want to build the best experience for every person on every phone." To achieve this, he wants Facebook to be the window through which we gaze at the rest of the computing universe. Even Apple isn't that arrogant! The glory of the iPhone -- or any smartphone, or really, any computer, is that they invite us to configure our options as we please.

You thought I was joking -- but Mark Zuckerberg really does want to steal your soul.