The actor "worries" that marriage equality will lead to incest 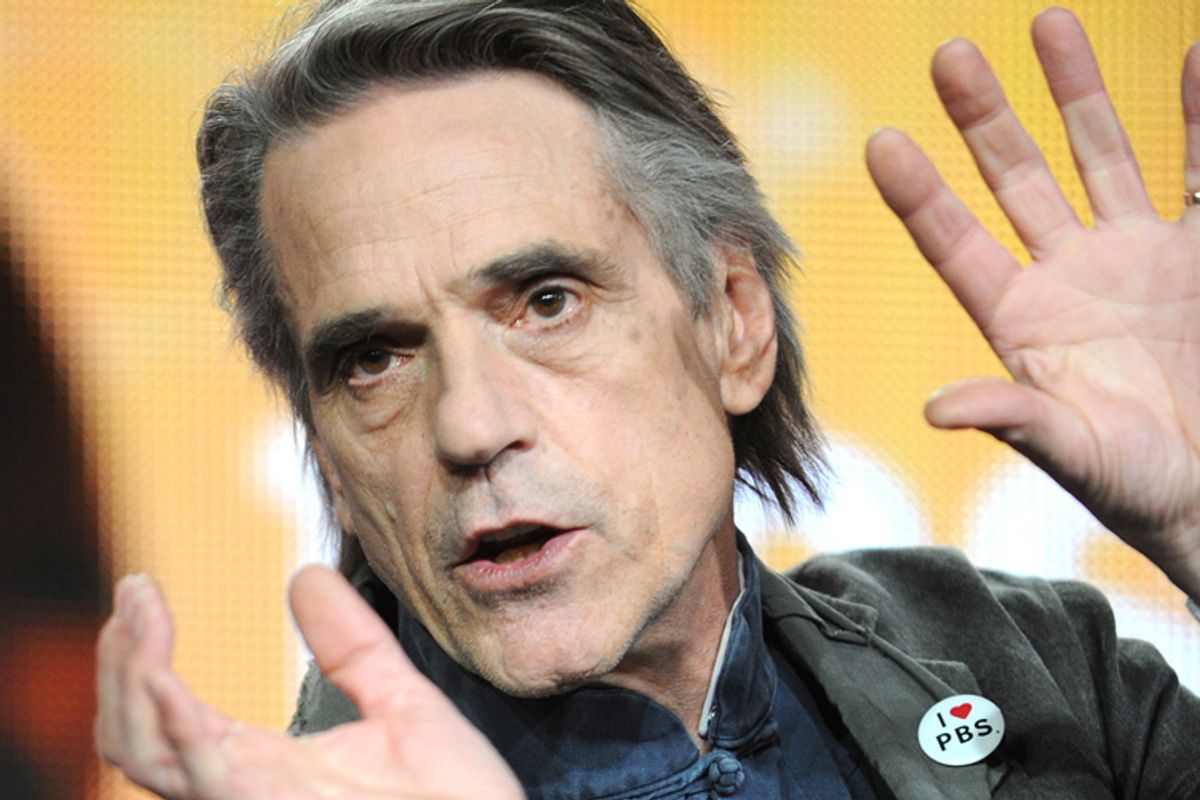 If you happen to be both liberal and obsessed with British Academy Award winners, brace yourself. This is the worst thing to happen since Helen Mirren made those cavalier remarks about rape and consent a few years back. On Wednesday, beloved eternal dreamboat Jeremy Irons gave an unsettlingly strange interview to Huffpost Live host Josh Zepps in which he seemed to argue that marriage equality will send us down the path to legalized incest.

Irons looked genuinely flummoxed when Zepps posed the question of "How far does it extend?" regarding equality, saying, "I don't know. It's a very interesting one, and I don't really have a strong feeling. But I see that what we had in England, which was not marriage but a union you could make if you were gay and you wanted to make a civil partnership. Same rights, not the name. It seems to me that now they're fighting for the name and I worry that it means somehow we debase or we change what marriage is. I just worry about that. I mean taxwise, it's an interesting one because, you see, could a father not marry his son? ... It's not incest between men. Incest is there to protect us from inbreeding, but men don't breed so incest wouldn't cover that. So if that were so, then if I wanted to pass on my estate without death duties, I could marry my son and pass on my estate to him."

Zepps, to his credit, then gamely tried to talk Irons down from the crazy tree, saying, "That sounds like a total red herring. I don't think incest law is only justified on the basis of the consequences of procreation." Irons does seem to be correct that there is no British law expressly forbidding a man from marrying his own son, but considering that there are currently restrictions against a man marrying virtually any female even remotely in his genetic circle, it seems a safe bet that any change in the marriage laws would be updated to put the kibosh on any father-son nuptials.

But the man who killed Simba's father would not be daunted. "I think the lawyers are going to have a field day on same sex marriage," he continued, adding, "I just wish everybody who's living with one other person the best of luck in the world. It's fantastic." And then, just in case you were thinking, well, at least he didn't go down the road of equating same-sex unions with dog marriage, sure enough, he then described himself as "a man who has a dog he loves."

And lest you fear that Irons restricts his unique brand of making no sense whatsoever to the subject of homosexuality, earlier this year he followed up his creepy 2011 statement that "If a man puts his hand on a woman’s bottom, any woman worth her salt can deal with it. It is communication. Can’t we be friendly?" by reiterating, "I love touching. I always touch people. I don’t think I said 'bottom' but of course I was misquoted. Any self-respecting woman would tell you to f*** off [if she minded]. I think we’re very robust as human beings." Speaking of humanity's robustness, he then shut down the concept of sex abuse, recalling a friend who'd been involved with a much older man when she was 13.

"There was sex involved," he said, noting approvingly that the woman was unscathed by the relationship. "There are people who are victims in life," he declared, "and I don’t think they should be encouraged."

In summation, Jeremy Irons thinks that marriage equality will lead to parent on child matrimony, that loving a dog is about the same as loving a spouse, that getting handsy is just being "friendly," and that we shouldn't "encourage" those people who say they've been sexually victimized. There's all the proof you ever need that a posh British accent is no indication of intelligence. But his comments can't help reminding us of his Oscar-winning performance in "Reversal of Fortune." In it, when another character calls him "a very strange man," Irons just smiles knowingly and replies, "You have no idea."