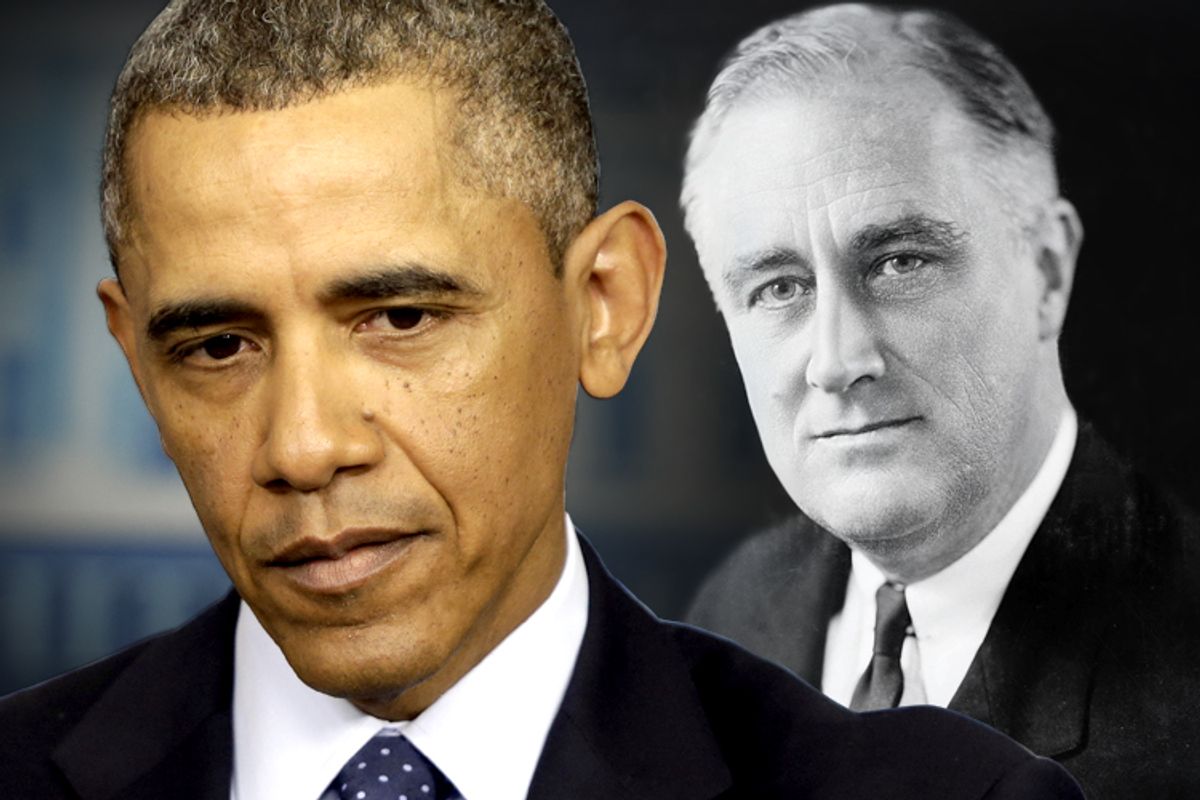 President Obama reportedly is unveiling a budget using the chained CPI inflation measure to cheat elderly Americans out of the benefits they were promised. In two previous posts I’ve explained the perversity of the current debate about Social Security. The tax-favored private components of America’s mixed private-public retirement system — programs like employer pensions, 401Ks and IRAs — are inefficient, volatile and subject to manipulation by overcompensated, fee-extracting money managers. In contrast, the Social Security program is simple and efficient, and has low overhead costs. And yet the bipartisan establishment, including many “progressive” Democrats as well as Republicans, wants to cut Social Security — the part that works — and expand tax-favored private savings, the inefficient, unstable and inequitable part.

While cutting Social Security makes no sense at all in terms of economics or public policy, it makes excellent sense in terms of the selfish class interests of the super-rich.  They have extracted about half the gains from economic growth in the U.S. in the last half-century and recycle some of their profits to fund politicians, and lobbyists, as well as mercenary propagandists who pose as neutral think tank experts. Social Security’s contribution to the retirement income of the rich is negligible, while the top 20 percent receives around 80 percent of the income from tax-favored private retirement savings accounts like 401Ks. Naturally many of America’s oligarchs want the public discussion to be solely about cutting Social Security benefits for the bottom 80 percent, rather than 401Ks for the top 20 percent. To paraphrase Leona Helmsley, Social Security is for the little people. And if we cannot afford all of our present public-plus-private retirement system ... well, as the saying in Tsarist Russia had it, let any shortage be shared among the peasants.

But even if the present system’s future funding needs are met, Social Security as it now exists is inadequate to compensate for the rapid disappearance of traditional pensions and the failure of 401Ks, IRA(s) and other tax-expenditure-subsidized private retirement savings. And Social Security is not very generous, by international standards. In the Natixis Global Retirement Index, the U.S. ranks 19th -- behind countries like Slovakia and the Czech Republic. The gross replacement rate for the average earner (how much pre-retirement income is replaced by public or publicly mandated benefits) is only around 40 percent, while the average in the European Union is more than 60 percent.

In response to the failure of the private retirement system, we should go beyond merely maintaining the public share of retirement income to expanding it. In a new paper, “Expanded Social Security: A Plan to Increase Retirement Security for All Americans,” Steven Hill, Robert Hiltonsmith, Joshua Freedman and I propose boosting public benefits from 40 percent to 60 percent of pre-retirement income for the medium earner, making reliance on failed and inequitable private savings programs less necessary. We would do so by fully funding the existing OASI program, which would be renamed Social Security A, and adding an additional universal, flat benefit called Social Security B.

As a thought experiment, we calculated how big Social Security B would have to be in 2035, if Social Security A and B combined were to add up to 60 percent of pre-retirement income for the average earner instead of today’s 40 percent for today’s Social Security alone (the thought experiment is not wholly realistic, as it leaves out transitions from the present system and other complications). Strikingly, the inflation-adjusted number that resulted from this back-of-the-napkin thought experiment, $11,699 a year, is very close to what a poverty-level, universal basic income for the elderly would be; in 2013 the official poverty level for a single individual is $11,490.

Because Social Security B, like Social Security A, would be universal, all economic classes would benefit, although in diminishing degrees as their other sources of retirement income rose. While the biggest winners would be low earners, who would enjoy nearly 100 percent pre-retirement replacement rates from public funding in the new system, high earners would benefit somewhat as well. The present OASI program, although it is funded by a regressive payroll tax, is moderately redistributive in its benefits formula. The additional Social Security B benefit we propose would be a universal basic income for the elderly paid for by taxes other than payroll taxes, such as general revenues, or a dedicated tax, such as a portion of a new federal value-added tax. Either general revenues or a VAT from which necessities were exempted would be far more progressive than the payroll tax, increasing the progressivity of the new two-tier Social Security system on the revenue side. While our plan devotes no more money to spending on retirement, as a share of the overall American economy, than does the present system, the well-off minority of American would take a big hit, notwithstanding the small benefit they derive from Social Security B.If the present system continues, then tax-sheltered private savings plans will pay out more in retirement income in 2035 (7.5 percent) than unreformed Social Security (5.6 percent). Most of that 7.5 percent will go to the affluent and the rich.

What possible public interest can there be in having all American taxpayers subsidize the retirement savings of the rich? If any tax-favored private savings plans are to exist at all, there should be strict contribution limits -- say, $5,000 per year -- to prevent the rich from squirreling away money and benefiting from compound interest at the taxpayer’s expense. The wealthy supporters of Social Security cuts say Americans should compensate by saving more. Well, let the rich set an example by saving more if they want to, once we take away most of their retirement savings tax breaks. In the new debate -- foreshadowed not only by our plan, but by influential thinkers like Josh Barro, Matthew Yglesias and Duncan Black, who might not endorse our particular proposal — the new “progressive” position, as it were, would be dramatically expanding Social Security; paying all promised benefits would be the new “center”; and cutting Social Security, by means of a higher retirement age, means-testing, or using inflation to rob seniors of promised benefits (“chained CPI), would be the right-most position. President Obama, in reportedly proposing to cut benefits for the elderly with chained CPI, should be careful, or he will end up looking as right-wing in retrospect as President Clinton does now for signing rather than vetoing the Defense of Marriage Act.

Until now, the debate about the future of Social Security has been rigged by the rich and right wing and their minions. It’s time for a genuine debate to begin.

This is the third in a three-part series. Read parts I and II.