From his TV stardom to his second career as Twitter pioneer, he was the most beloved and generous of all critics 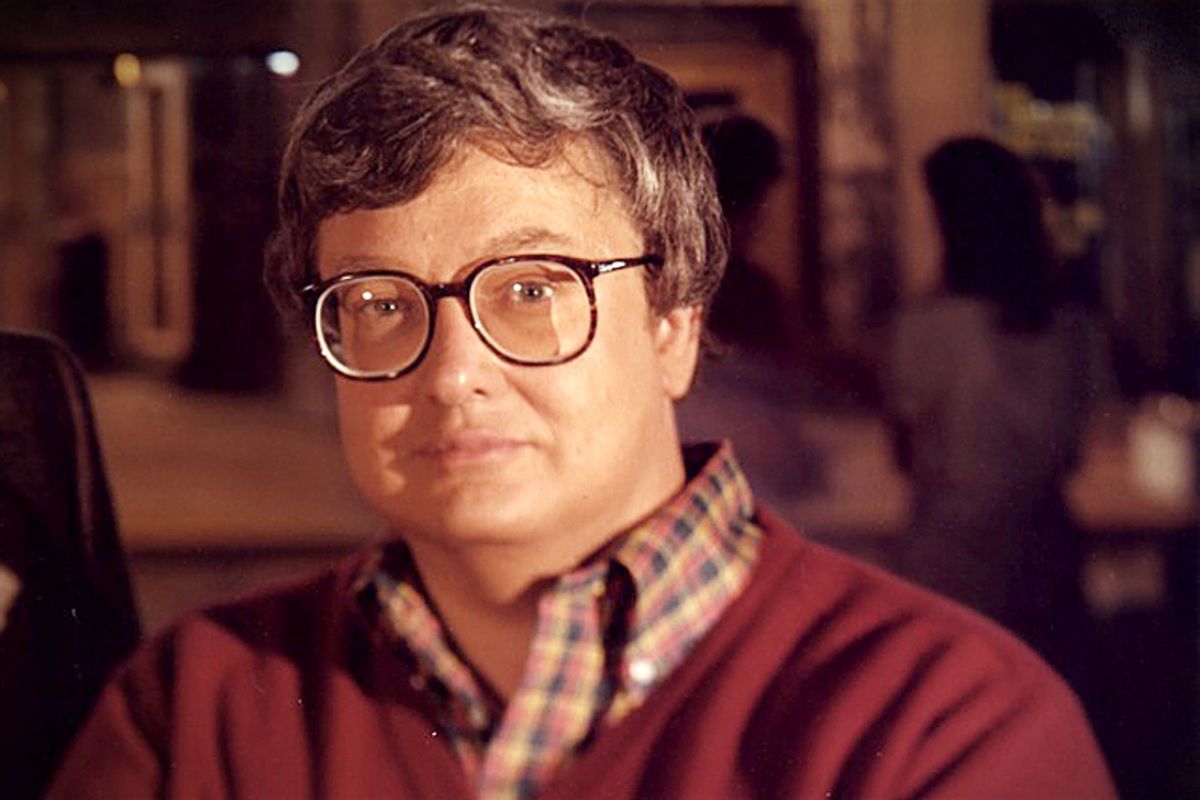 Roger Ebert, who died on Thursday at age 70 after a long and debilitating struggle with cancer that never sapped his spirit, was the Great Communicator of movie criticism, a genuine and generous man who became the greatest popular advocate the form has ever had. He reached millions of readers with his straightforward prose, and a vastly larger universe of TV viewers in the ‘80s and ‘90s with his gruff but avuncular presence. Even if you’re too young to have grown up watching Ebert spar on the small screen with his late friend and rival Gene Siskel, you still know who he is. Virtually alone among his generation of journalists, Ebert saw the substantive potential of social media early on and translated his fame in print and on TV to the Internet, becoming a Twitter trailblazer and a mentor who showed the rest of us in this imploding profession not just how to survive but how to prosper in the digital age.

If few other film critics – none, actually – have emulated Ebert’s phenomenal popularity, maybe that’s because the cynicism that seems almost hardwired into journalists (and even more so into critics) played no part in his makeup. Ebert was a loyal democrat (as well as a loyal Democrat) who was always inclined to believe the best about his fellow human beings, his country, the world and the movies he loved and consumed by the thousands. As he wrote in his 2011 autobiography, “‘Kindness’ covers all of my political beliefs.”

If that sounds as if I’m trying to be clever about describing Roger as unsophisticated, or damning him with faint praise, I mean precisely the opposite. (My personal acquaintance with him was slight, but like everyone else in the film world and his legions of fans, I felt we were on a first-name basis.) He's up there with Will Rogers, H.L. Mencken and A.J. Liebling, and not too far short of Mark Twain, as one of the great plainspoken commentators on American culture and American life. What was so wonderful about Roger as a critic was the fact that he was never a snob and never condescended to anyone, while also being an immensely knowledgeable student of film who avoided the faux-populist reverse snobbery of so many of the critics who followed him into television. He wrote in clear, declarative newspaper prose aimed first and foremost at his Chicagoland readership – “I go into the movie, I watch it, and I ask myself what happened to me” – but was just as likely to lavish praise on foreign films or tiny indies or cheesy exploitation flicks as on Hollywood star packages.

Pioneering feminist rock critic Ellen Willis, another great journalist who died of cancer much too young, once told me that a critic had to be clear about whom she was attacking, and whose battlements she wanted to storm. It’s a valuable perspective. Ellen’s target was most clearly the sexism and misogyny of rock ‘n’ roll, journalism and the culture at large. For longtime New Yorker film critic Pauline Kael, the enemy was the stuffy and self-congratulatory elitism of the urban intelligentsia, who she believed were draining all the fun out of moviegoing. Roger was a different case. He certainly called out pigheadedness, fatuousness and cynicism wherever he saw it – and those things are endemic in the film business – but he was fundamentally a passionate and knowledgeable fan, who was for underappreciated movies and the people who had labored so hard to make them.

Roger would undoubtedly prefer to be remembered today for championing a strange little late-‘70s documentary called “Gates of Heaven,” by a then-unknown director named Errol Morris, than for his legendary quip a decade ago about Vincent Gallo. (Roger, who was pretty chunky during his middle years, observed that he might be thin one day, but Gallo would always be the guy who made “The Brown Bunny.”) Those, of course, were just two extremes among the thousands of movies he reviewed in 46 years as a professional critic. In recent years, even as cancer attacked his body and he lost both the power of speech and the ability to eat solid food (after a 2006 operation that removed most of his lower jaw), Roger only seemed to gain more appetite for discussing movies, politics and life. Last year he reviewed more than 300 films even as his disease returned and worsened, and that’s without counting all the impromptu political commentary, health updates and Twitter debates.

Honestly, I have no idea how he managed it, and all without his tastes becoming calcified or predictable. Here is a partial list of Roger’s four-star rave reviews from 2012: the Richard Gere movie “Arbitrage,” the Hong Kong comedy “A Simple Life,” the animated “Chicken With Plums,” eventual Oscar-winning documentary “Searching for Sugar Man,” Norwegian director Joachim Trier’s “Oslo, August 31st,” the globetrotting panorama “Samsara,” the L.A. cop drama “End of Watch,” “Argo,” “Cloud Atlas,” “Flight,” “Skyfall,” “Lincoln,” “Life of Pi,” the documentary “West of Memphis,” “The Impossible,” Michael Haneke’s “Amour,” Michael Apted’s “56 Up,” and Carl Franklin’s barely released indie “Bless Me, Ultima.” I think he’s on the money about most of those movies, and even where I don’t – “Flight” and “Life of Pi,” along with a few others on that list, reflect his lifelong weakness for sweetness and schmaltz – the sensibility is unmistakably Roger’s and the case is argued with heartfelt clarity.

I got into a public dispute with Roger over cinematic schmaltz a couple of years ago, and I couldn’t be more grateful. I had reviewed “Secretariat” in somewhat hyperbolic terms, arguing that its sunny, inspirational nostalgia masked a hidden right-wing agenda that had almost nothing to do with the story of a Triple Crown-winning racehorse. Roger loved the movie and didn’t see any ideological subtext, and wrote an extensive rebuttal explaining all the ways in which he found my review ridiculous.

Even at the time I was aware he was doing me a huge favor by driving several hundred thousand readers to my review, and it only got better. I wrote back a somewhat heated response and with typical levelheadedness Roger then lowered the temperature, conceding a few points and saying he now understood my argument even if he didn’t agree. Bloggers and readers lined up on both sides and it was great fun for about a week, without either of us saying anything we had to regret later. (In fact, that’s what he said to me, through his wife, Chaz, when we ran into each other at Cannes a few months later: “Wasn’t that fun?”)

I still think I was mostly right about “Secretariat.” (Every critic has a few opinions they’d like to take back, but I’ll stand behind that one.) But far more important right now, I think our dispute reflected a genuine difference of outlook and philosophy that spoke to the kind of person and critic that Roger was. What really nettled him about my review was my superior-minded and quasi-Marxist reading of what I deemed to be the deeply embedded meanings of the film, and the implication that people like him who loved the movie had been taken in by a piece of bogus, feel-good Americana with a dark core. Roger was a staunch and sensitive liberal, not to mention a feminist and a forceful opponent of racism, and he responded strongly to political material. But across those 46 years and many thousands of films, he always thought of himself as a movie fan first and foremost, who was always willing to be swept up in an uplifting story about a horse. Which approach is more humane and generous, not to mention more popular?

It wouldn’t be fair not to mention that Roger had a reputation as a hard drinker in his youth and something of a diva during his years of TV stardom – and at least a few of his on- and off-air battles with Siskel have been preserved for posterity. He was already something of a renaissance man long before his aggressive thyroid cancer was first diagnosed in 2002, hosting an annual festival of overlooked films, traveling annually to the Conference on World Affairs in Boulder, Colo., to deliver lectures on classic movies and writing numerous books, including an old-school serialized novel for his longtime newspaper home, the Chicago Sun-Times. But he seemed to seize every possibility of his life and career in the years since then, writing and tweeting and watching movies day and night, doing more than most of us will ever do even as his body could take less and less.

As Roger wrote in his eloquent and concise autobiography, “Life Itself,” he hoped he would stick around for a while but neither feared death nor expected a miraculous afterlife. He quoted Whitman’s famous line: “If you want me again look for me under your boot-soles.” As difficult as it is to believe that Roger isn't working on half a dozen new reviews right now, along with a series of tweets about everything he's been reading and watching, you’ll find him any time you look up almost any movie, large or small, released between the late 1960s and last week. He’ll be rooting for it the whole way, cheering for it to be just a little bit better than it is, saddened when it goes off the rails.