Is Egypt ready for its own Jon Stewart?

The country is no stranger to satire, but Bassem Youssef's unique brand of humor is unlike anything it's ever seen 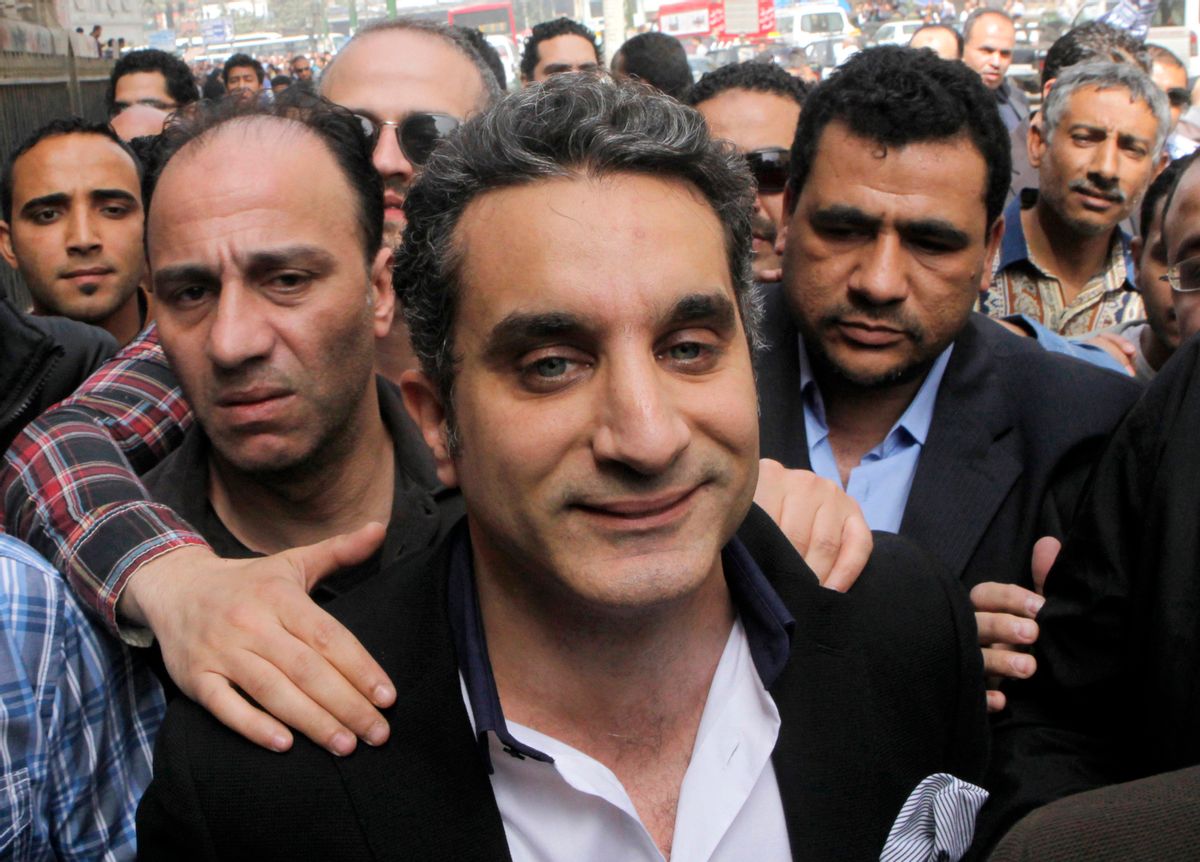 CAIRO, Egypt — Egypt’s judiciary created an international firestorm when the top judge summoned the country’s foremost political satirist in for questioning this week.

The comedian, Bassem Youssef, uses his weekly satirical news show — which is based loosely on Comedy Central’s "The Daily Show" — to “insult the president” and “insult Islam,” the complaint filed against Youssef said. Youssef was released on $2,200 bail as investigations continue.

Critics are calling it an unprecedented assault on free speech in post-uprising Egypt, with even the US State Department and Jon Stewart from "The Daily Show" weighing in to support Youssef. The responses caused a diplomatic tiff in which the official Twitter account of Egypt’s presidency chastised the US Embassy in Cairo feed for posting "The Daily Show" clip criticizing President Mohamed Morsi.

But even before the uprising two years ago, which did in fact open up the field for new styles of in-your-face satire and comedic criticism, Egypt’s love of comedy — whether satire or slapstick — was well-known in the region.

Under the former regime of Hosni Mubarak, social and political satire was somewhat tolerated, as long as the president and government figures weren’t targeted or mocked directly. In a hilarious bit of rebellion, Egyptians on the streets often referred to Mubarak as “La Vache qui Rit” (The Laughing Cow), for his resemblance to the cheese’s logo.

“Egyptians have always dealt with everything through comedy,” said Marwan Imam, an Egyptian comic book author and stand-up comedian. Indeed, it’s difficult to walk even a simple city block in the capital, Cairo, without hearing some sort of Egypt-specific wisecrack.

“And there have always been great comedians who made fun of the system,” Imam said. “Even those who were pro-regime like Adel Imam or Mohamed Sobhi, whose films and plays were always critical of politicians and society.”

Egyptian historians and cultural critics say Egypt’s comedic tradition is anchored in the fact that it has the most established and most vibrant television and film industry in the Arab world. In addition, years of searing poverty, corruption and other social ills made comedy a great escape for suffering Egyptians.

In “Terrorism and Kebab,” a popular Egyptian comedy from 1992, famed comedian Adel Imam plays an ordinary Egyptian man attempting to navigate the country’s notoriously corrupt and frustrating bureaucracy housed in a mammoth-sized building in Tahrir Square. During a scuffle with a particularly reticent bureaucrat, Imam’s character, Ahmed, ends up with a security guard’s gun, accidentally taking the building hostage.

When the Interior Ministry begins negotiating with Ahmed, his only demand is that all the hostages be provided with kebab, with meat being an expensive luxury still out of reach for many Egyptians.

“We have a lot to cry about, but we choose to laugh instead,” said Abd Al Moez Al Sawy, a fruit vendor in Cairo. “Everything just keeps getting worse. But we have to live anyway, so we joke.”

Still, most Egyptians agree that Youssef’s style is a new brand of satire — one that takes politicians and the current Muslim Brotherhood-led regime to task directly. With Egypt still in the midst of a decidedly rocky democratic transition, Youssef’s blunt comedic tactics may have proved too much for the country’s new rulers.

“With Bassem Youssef, there is no real precedent in Egyptian culture,” said Cairo-based film critic, Joseph Fahim. “He appropriated an American format and made it his own. And what made him stand out is that he went full-throttle — no one was above criticism.”

The unnamed private individuals who filed the lawsuit against Youssef, who are backed at least rhetorically by the Muslim Brotherhood, are depending on Egyptians’ sense of decency and social conservatism, British-Egyptian journalist and blogger Sarah Carr says.

“There is a sense that Youssef has crossed a line of respectability that has nothing to do with politics, and the idiots behind these charges are banking on that,” Carr writes on her blog, Inanities.

Youssef indeed uses sexual innuendos to poke fun at Egypt’s political figures, including the Islamists he recently made a primary target of his ridicule. Film critic Fahim says most of his support base is likely located in cosmopolitan urban centers such as Cairo and Alexandria.

“Satire must be more refined, not so offensive and vulgar” like Youssef’s, said a Brotherhood organizer in Alexandria, Tariq Bareekhy.

But in ominous comments that suggest Youssef is coming under fire for more than his vulgar language, Bareekhy expressed nostalgia for the political and cultural climate under Mubarak.

“This is not satire, this is not opposition — he is trying to make the system fail,” Bareekhy said.

“We say now that Mubarak was very lucky with the opposition [to his government],” he said. “They were a lot more fearful.”