“Some people will always need help. That doesn’t mean they’re not worth helping" 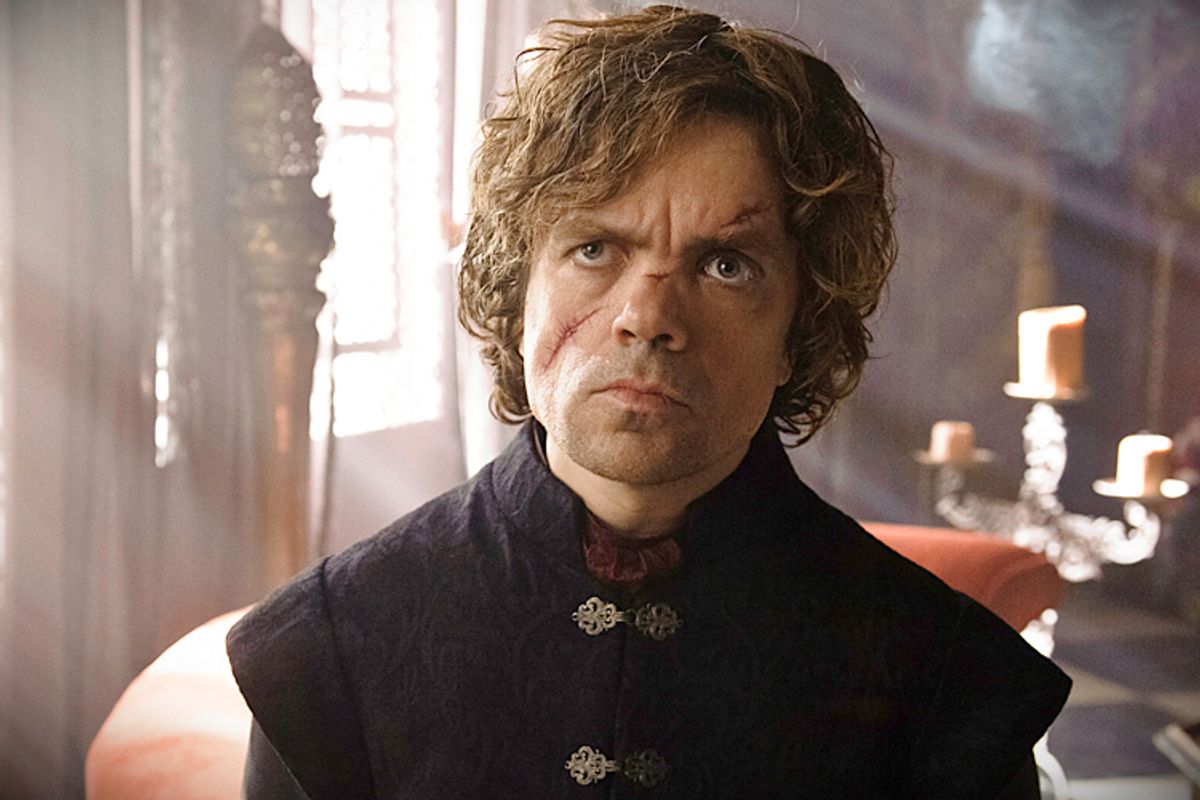 “Some people will always need help. That doesn’t mean they’re not worth helping.” So says Meera Reed, a brand-new character adept at throat slitting and, apparently, calling out “Game of Thrones” themes. This episode, the second of the new season, concerns itself with exactly this quote, focused both on the helpless and the helpers, those who need protection and those doing, or failing to do, the protecting.

Needing help: Bran. Since we last saw him, Bran’s eyebrows have advanced into adolescence, and the make up team is probably shaving his upper lip’s peach fuzz. He’s walking through his dreams, hunting the three-eyed raven, being coached by his former protectors — his brothers and father — to not much effect. He misses the bird, which is good, since, as the teenager formerly known as Liam Neeson’s son in “Love Actually” and now known as Jojen Reed informs him, Bran is the three-eyed raven. (The three-eyed raven is remarkable to me for looking so unremarkable: All ravens could have three eyes, I would never notice.)

Bran wakes up to Osha and Hodor doing everything they can to keep him and his brother safe as they make their way to the wall. Osha may be the character who prods Meera into pointing out that even the helpless sometimes deserve help, but she actually doesn’t need the lesson: This is something that Osha knows intuitively. She’s been carting young Bran around for weeks and weeks now and thanks to her, Bran is one of the luckiest helpless people in the “Game of Thrones” universe. (Compare him to tortured Theon or poor Sam, whose help comes in the form of being forbidden to die.) Between Osha, Hodor and now Jojen and Meera, Bran has quite the crew working to ensure he lives to warg and prophesize another day. (The episode's other wilding warg: totally Gareth from the original "The Office.)

Bran’s sister, Arya, is neither as helpless as Bran nor as well-cared for. She and her friends are taken by the Brotherhood without Banners and over some beers Arya decides to draw her sword on a roomful of grown men — just like her brothers, the same ones who just didn’t guide Bran’s arrow, taught her. The brotherhood is kind enough not to make Arya pay for her deluded bravery. Arya, swaggery little munchkin that she is, has some things to learn about self-protection, and specifically about going quietly when necessary — or even just hiding in a corner until the Hound gets a bag thrown over his head.

Unlike the two Starks, Margaery Tyrell is a real ace at the self-protection game, and her grandmother Lady Olenna — “Game of Thrones'” very own Dowager Countess — is an ace protector. The two of them are trying to load up on information about dreadful Joffrey, the kind of confident man who is scared of seeming sissy in flowers. (Cersei, in her own twisted way, is doing everything she can to protect her son, but all she’s getting back is evil, adolescent sass: “That’s what intelligent women do,” Joffrey tells her, “what they’re told.” Cannot wait for this asshole to get his.) Margaery and Olenna invite Sansa over for lemon cake and cheese — if Olenna says it’s a good combo, don’t doubt it — in hopes she’ll dish on his character.

This scene, where a trembling Sansa initially resists saying anything bad about Joffrey, was the moment I really started to like her, not just pity her. (It also put over that King's Landing, for all its medieval garb, is basically kin to East Germany or any state with a huge domestic spying system. Littlefinger and Varys and Cersei may not look like it, but they're basically Stasi.) I'd like to think that in a horrific situation I’d be like Arya — brave, plucky, honest, a good enough judge of character to recognize a sociopath when I saw him. (Or a gay guy: Sansa, Loras is just not that into you.) But more likely I would just be frightened and scared, doing whatever I could to survive. That’s Sansa, the regular, skittish, passive person in a family of freakishly honest and bold souls. (Fitting in is conditional: When things were good, it was Arya who was the black sheep.) When Sansa finally admits that Joffrey’s a monster, she’s taking a rare risk. It's braver in its way than Arya drawing her sword; unlike Arya, Sansa’s terrified to do it.

Margaery takes this information and does what she has to with it: neutralize Joffrey. Joffrey, inspired by his mother — this is so perfectly teenage: Your mom says something and you yell at her for it, and then when she’s not around you act on her advice — tries to needle Margery about Renly. But she is too smart for him, and before he can finish his thought about murdering all the homosexuals in the realm, she’s fondling his crossbow. Margery knows she has to let Joffrey feel like he’s the man, the protector— Joffrey explains that she “no longer belongs” to her father — in order to successfully manipulate him. Margaery’s emotional intelligence is so high, it’s creepy. She’s so adept at playing Joffrey, one wonders if there’s anything she won’t do to play him. “It must be so exciting to squeeze your finger here and watch something die over there,” she says to him, a perfect thing to say: He must feel totally understood. “Would you like to watch me kill something?” she asks, also perfect and frightening: He just might ask her to do it.

Unlike Margaery, there’s no doubting Brienne’s values, which remain firmly on the side of not killing innocent people. As she and Jaime banter in the woods they come across a regular guy. Jaime is sure that he recognizes them, but Brienne is unwilling to kill him: He’s innocent. It’s the right thing to do, until the man rats Jaime and Brienne out to the Boltons, who take them into captivity. (Before they are taken, Jaime steals a sword from Brienne and fights her. He taunts that because she won’t kill him, she won’t beat him. Happily she is making a total hash of this pronouncement— she seems more than capable of beating him without having to kill him — right before they are captured.) Brienne has failed to protect Jaime by insisting on protecting the innocent.

But of course, it’s too soon say whether Brienne made the right choice: consequences unfold over the long term.  Catelyn Stark, still being held in chains by her son, finds out that her father has died and that Winterfell has been torched, her two youngest sons lost or dead. She starts making a dream catcher, a very, very fierce dream catcher, to aid her sons, a dream catcher that sends her down memory lane with Robb’s new wife. She recalls that when Jon Snow first arrived at Winterfell she wished for his death. When he fell sick, she “knew I was the worst woman who ever lived” and prayed for his survival, promising that if he lived she would love him like he was her son and give him the Stark name. Well, Jon lived, and we all know Catelyn never loved him: “I couldn’t keep my promise,” she says. “And everything that’s happened since then, this horror that has come to my family, is because I couldn’t love a motherless child.”

Catelyn did wrong by Jon — she failed to help someone who needed it — but up until two years ago, or whenever Ned Stark marched off with Robert Baratheon, if you had asked Catelyn if she'd been punished for not loving Jon, she would have told you no. Bad luck has made her superstitious, but bad luck took its time to arrive. If Catelyn could have seen the consequences of her choices, she might have chosen differently; but if any of the characters could see the consequences of their choices, they all would have picked the right king already.