I was a kept man

It sounds like a male fantasy: Free rent, great sex and lots of drugs. But I was wracked by guilt and inadequacy 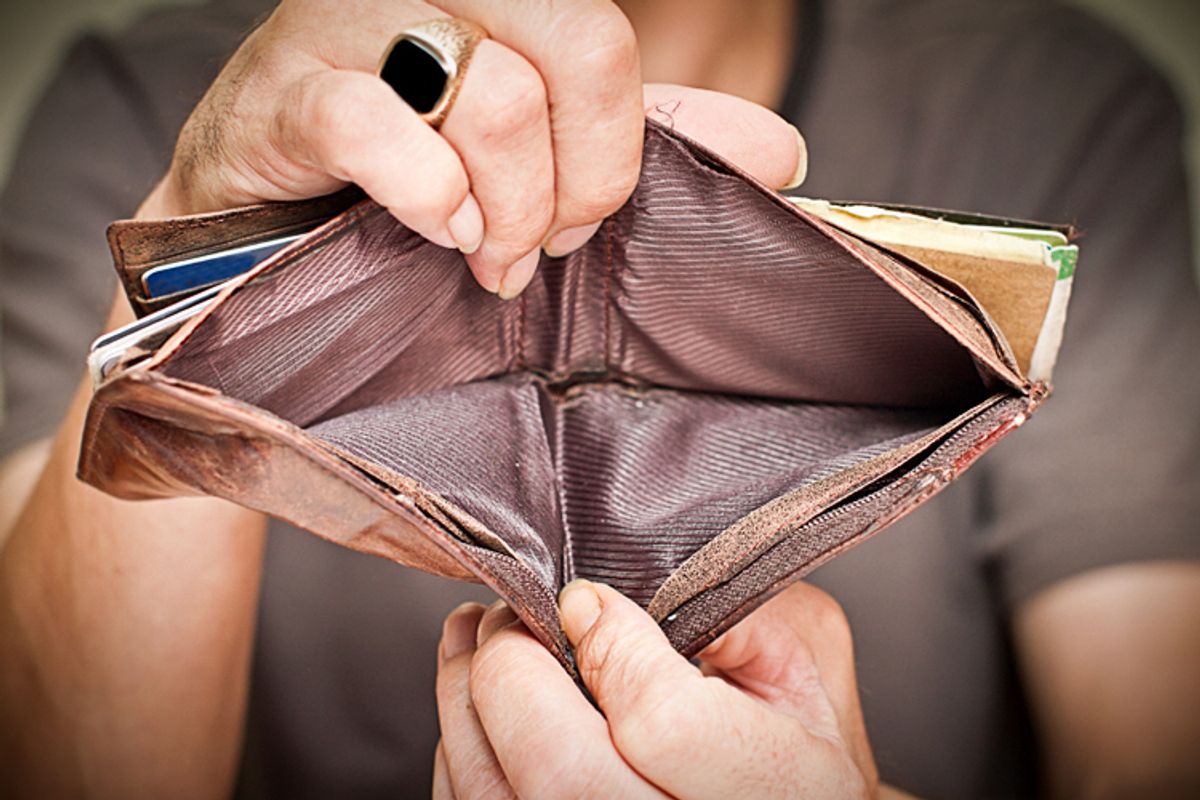 To the beautiful woman at Bar 13, I probably looked like any other Brooklyn, N.Y., scenester in the winter of 2004: tight jeans, shaggy hair and a pale complexion. She sidled up beside me on the black banquette and chatted me up over blaring rock music. Self-deprecating flirtation turned to drink buying as we made grandiose pronouncements about politics and punk rock. She had majored in literature but was now living in Williamsburg and commuting to New Jersey three times a week to strip. She certainly looked the part. I was instantly attracted to her, and she knew it.

We had our first kiss in a dark corner. Before long, we were flying down the stairs of the club and climbing into the back of a cab. Within 30 minutes we would be back at her house for hours of groping and tussling, but when I asked the cabbie to pop the trunk, she asked, “What is that big, green bag you’re carrying?” I looked at my feet and confessed.

I had a barely disguised secret that night: If I hadn’t hooked up with a lady, I would have slept on a friend’s cold floor in a sleeping bag. Actually, that was the best-case scenario. I might have slept sitting up on the L train until morning rush hour bade my day to begin. I’ve heard men in my position called sex gypsies, or kept men – both of which sounded ridiculous to me, because I was a smart, normal guy in my early 20s living in the greatest city in the world -- but by accepting her offer of a warm bed, the place where I would sleep for many weeks thereafter, that’s what I had become.

I had been self-reliant for a few years prior to this period. In the early 2000s, housing was still relatively cheap in parts of New York City. While others were toiling away at 9-to-5 jobs in midtown for 30K a year, I had managed to secure waiter/bartender gigs that were netting me $200 to $300 per night, cash. While my peers invested in 401Ks and equities, I got hot tips from investment bankers and French tourists. Working two or three nights was all I needed to survive and the rest of my time could go to making music, writing and hanging out all night.

This kind of lifestyle rarely lasts, of course. The apartment I shared in Bushwick with my roommate turned into a place for hard drinking and drugs. Over a couple of years he and I had gone from “chipping” (as the junkies call it) every once in a while to doing one, two or three bags of heroin a day, with dashes of cocaine for good measure. When I realized drugs were becoming more an end in themselves, as opposed to a means to having fun, I tried to quit, but my roommate continued to use. After a big fight broke out, I asked him to leave.

But my income could not cover the whole apartment. My attempts to clean up were faltering, and I was getting more and more behind on rent. As it turned out, my landlord was an Italian-American businessman whose coterie included a lot of big guys in black leather jackets. One night that winter I got home late from work and my next-door neighbor informed me with a look of concern that the landlords’ flunkies had gone through my apartment looking for money. When I found a threatening letter on the kitchen table, that was it: I packed as many belongings as I could into a big, green army bag and simply left.

Lacking the cash for a down payment, and still throwing away money on drugs, I spent a couple of weeks drifting around and crashing on friends’ and exes’ couches. Unsurprisingly, there is only a finite amount of good will and couch space to go around, so about the time I met the beautiful stripper at Bar 13, I was spending a night or two sleeping on the train. Thankfully, she was a nice person and not the least bit scandalized by my situation, so I essentially moved in with my big, green army bag in tow.

She had a spacious apartment, and we enjoyed hot showers and fine sex. We even mixed these pursuits together when the fancy struck. Our relationship wasn’t emotionally deep. I don’t think we ever had a serious talk about where we were going as a couple. Nevertheless, the time we spent together was comfortable. We spent evenings watching a movie and splitting a bottle of wine. I was always amused that this badass stripper’s favorite film was “Bridget Jones’s Diary”, and she would sigh on my shoulder with contentment.

Maybe this sounds like a clichéd male fantasy ripped from the tawdry pages of Letters to Penthouse. But that just goes to show how one-dimensional the packaged portrayals of “male fantasy” can be. Even as I enjoyed the pleasures of being kept, I was wracked by feelings of inadequacy. How does society judge a man who survives off the income of a woman? Our arrangement was mutually beneficial. Did that make it OK? Still, I couldn’t shake the feeling that I had screwed up badly. How did I become so reliant on another person to meet my basic needs for food and shelter?

The awkwardness of our financial arrangement would reveal itself from time to time. We only went out to medium-priced dinners in the neighborhood. Usually when I was short on cash, she would put in extra to cover me. When I was short on subway fare, she would drive me to work on the Lower East Side. When she was out stripping I would hang around her house, eat her food and play guitar. When she got home and put down her purse I’d see huge stacks of 20s and remember my pockets were full of change.

Every night that I stayed at her house — no matter how much fun we were having and how much satisfaction we gave each other — so grew the gnawing shame of being reliant on a woman’s income. Every moment of closeness – every moment that suggested what we had might be more than casual sex and convenience -- was undercut with a pang of guilt in which I remembered how my failures had landed me in such an uneven relationship. If I had the ability to be honest, I would have told her, “Look, I really enjoy spending time with you and appreciate your generosity, but at least 50 percent of the reason I am here right now is because I have nowhere else to go.”

I knew if our roles had been reversed – if I had been the one taking care of her – I would not have felt so twisted. Society is still a patriarchal affair, more comfortable with the Norman Rockwell portrait of male as breadwinner, woman as homemaker arrangement. A rich older man with a much younger and hotter wife, one who just happens to be his dog groomer, may be the subject of eye rolling and petty gossip, but that arrangement is still far more acceptable than mine. I was dubbed a mooch, a parasite, a loafer. A sex gypsy. All unflattering terms, because being dependent on a female, even your mother after a certain age, shows a lack of masculinity, just as having a young and hot wife enforces your perceived manhood.

I had always prided myself on nonconformity. I devoured anthropology books and had strong feelings about the straitjacket of gender roles, and I wanted to shake off those outdated behaviors and be kind to all my partners and treat them with respect. If anyone could have overcome this double standard, it should have been me. But as much as I knew I was not hurting her by living there, and as much as I realized that living with a stripper who paid for the cocaine was many a man’s dream, I still felt terribly self-conscious and conflicted about the whole affair. I could not overcome it no matter how hard I tried.

After a couple of months, I got back on my feet. I managed to quit drugs and save enough money to get an apartment with a friend. With my need for shelter taken care of, I drifted away from the beautiful stripper who had cared for me. I stayed at her place less and less frequently. We would meet up at bars and parties and spend the night together, but it wasn’t the same. I guess I didn’t need her anymore, and both sides of our relationship had been built on this need.

I am certain that the sadness came not from the money she spent on me. Likewise, I don’t even regret the “emasculating” experience of accepting help in a rough time. Maybe no man should. Maybe the difference between a sex gypsy and a guy-going-through-a-hard-time-who-finds-a-woman-who-cares is not in how poor they are and how much help they accept, but in how honest they are with themselves and others. Great sex and free rent are nice, but nothing can replace a person’s integrity and self-respect. I didn’t have it then. And that’s the part of me that was really broke.

Max Schwarz is the pen name of a teacher living in New York.