John Slattery on joking at the doctor's office 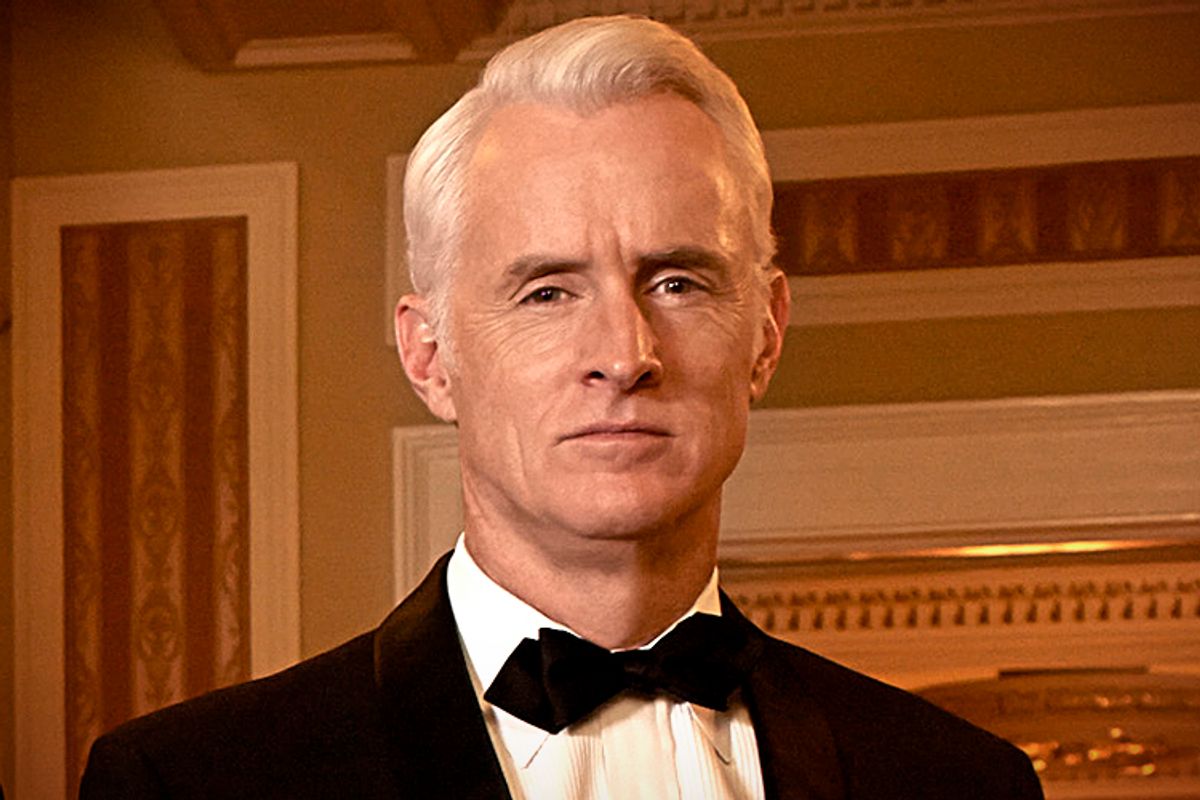 Roger seems like he might be kind of adaptable, better suited to a new world, but there’s this problem: He’s just getting older.

Well, that’s it. That’s everybody’s problem, getting older in this particular time period, which may be more significant than it is today, when it was us versus them, the youth versus the establishment. And like it or not, Roger’s on the wrong end of that. But I do think he’s chosen to be adaptable. I think it’s surprising that of all the people who take LSD and have that experience, it would be Roger, who you would think is so old world and is just going to stay that way. So I do think he’s adaptable. But I also think he’s realistic enough to know that he’s not off this generation that’s coming up now, on which all the attention is focused. I think that’s difficult. It’s difficult now in my life, being the age I am, going through the world and the world is youth-oriented. It’s definitely better to be young.

What do you make of Roger’s analysis?

I wasn’t familiar with that kind of strict analysis. I mean, I’ve been to shrinks and stuff, but I think that Roger uses it conveniently. I think he’s looking for something, some kind of sustained meaning that isn’t there. But I don’t know if he’s worked hard enough. I think he thinks taking LSD a couple times is going to give you a sustained, gratifying sense of meaning, but I think it’s harder to come by than that.

Maybe especially if you’re using analysis like a comedy club.

How was it doing that scene where you have to break down and cry?

Not easy. Particularly that scene . What’s not easy is that there’s no dialogue. Usually you come in with emotion ready to go and the lines of dialogue in the scene will take you to the place you’re supposed to be. In this one, it was just walk in the door and hit the cry button.

Do you just have to think about terrible things?

Yeah. Basically, that’s exactly what you do. Think of some horrible shit and get upset. For everybody, it’s different. For some people it’s easier than others. Some days I can do it, some days it’s tricky, because you have to be ready when the set is lit and when the director says “go.”

You had a lot of great lines in the premiere, but I thought the “My mother loved me in this totally pointless way” line was really interesting.

Yeah, isn’t that great? That explains a lot, I think, about this guy. I think that’s where a lot of people’s security comes from. If you can say that about your mother, “my mother loved me in some completely pointless way.” No matter what I did, my mother unconditionally loved me. It sets you up for a lot of the struggles in your life. It sets you up in a really good way. You feel confident in yourself. It does wonders for your self-esteem.

He hasn’t been able to do that, quite, for his daughter.

I think there’s a quid pro quo with the daughter. I think Roger wasn’t around very much, I don’t necessarily think he was the model father, and what goes around comes around. You treat somebody like that, what do you expect to get back in return? They’re asking you for money. I think it’s fairly clear in that scene where she asks for money for her husband that Roger gets it. He doesn’t say no. He knows what he’s done.

Are you directing any more episodes this season?

Yeah, I just finished my second one. I directed two this season.

Does it change your relationship with the episode to direct it?

Entirely, because you have a much more intimate relationship with the entire script than you do when you’re acting, when you get the thing on Tuesday and you start shooting on a Wednesday, sometimes on the same day. So you do a read-through and then you get out there. Directing you have it for two weeks. By the time you’re shooting it, you’ve had it for 10 days or so, and you’ve read it over and over and over, and it’s been discussed at many meetings over and over and over, so it’s a much more complete view of the thing than just acting in it. And when you’re directing, you see how intentional it all is and how complicated and well-thought and harnessed it all is. It’s all these moving parts that are sort of harnessed into an episode with such intention and detailed scrutiny that I don’t know how the hell they do it.

Does it feel any different knowing when the show is going to end, that this is the second to last season?

This year is a little different. We all knew it was going to end at some point. And then the closer it gets, you’re like, “Geez, this is gonna be sad. It’ll come right around the corner.”