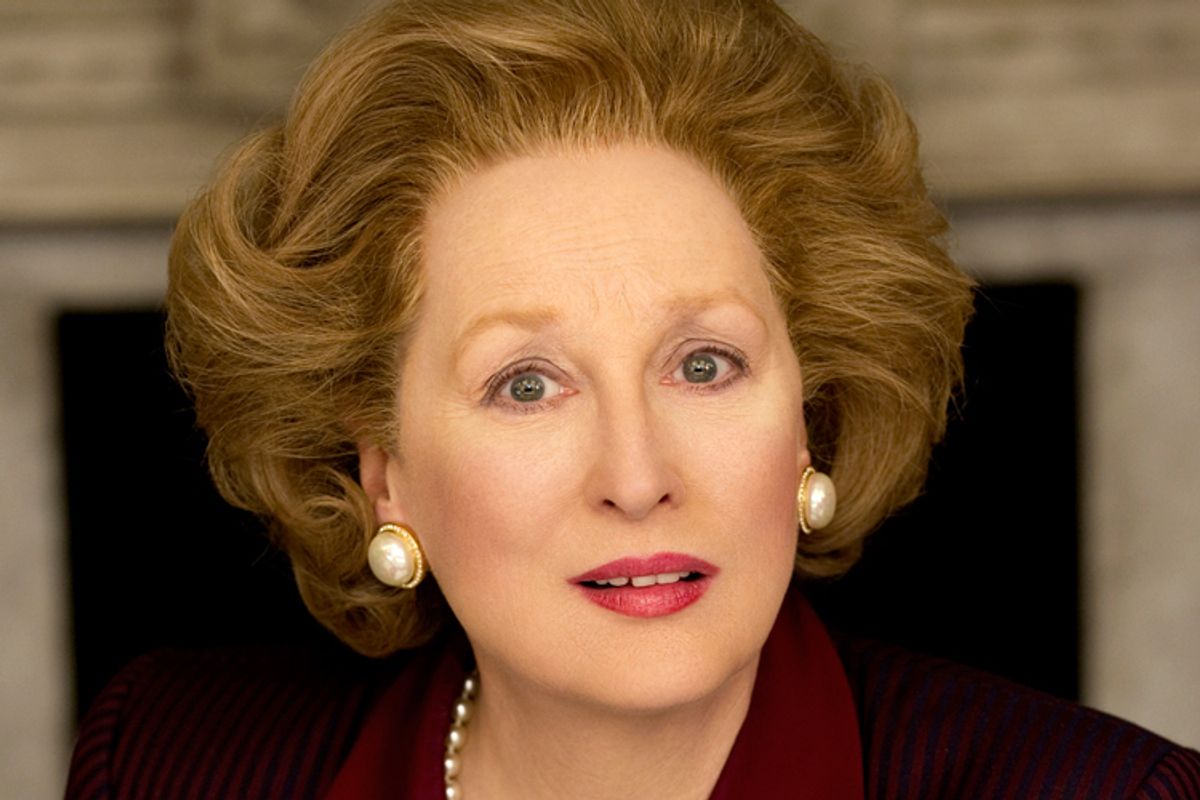 Meryl Streep as Margaret Thatcher in "The Iron Lady"
--

Of the many things for which Margaret Thatcher, who died Monday, will be remembered, surely one of her most enduring and oddest legacies will be role as a pop culture muse. She was a woman who could coax songs out of Elvis Costello and films from Stephen Frears and Derek Jarman. She was a television series plot point and a music video star. And she inspired, in part, because that lock-jawed, big-haired former British prime minister possessed that irresistible combination of being both easily imitable and widely loathed. The result was an astonishingly rich 35 years worth of rich inspiration.

Sure, if it weren't for Thatcher, we might not have had the miner's Strike and the poll tax riots, but give a woman credit for launching a whole lot of artists and their works. Almost four years ago to the day, when the U.K. Guardian reflected on her artistic legacy, Billy Bragg observed, "Whenever I'm asked to name my greatest inspiration, I always answer 'Margaret Thatcher.'"

He was far from alone. She was the Margaret of the English Beat's peppy "Stand Down Margaret," and the object of Sinead O'Connor's "Black Boys on Mopeds." "Margaret Thatcher on TV, shocked by the deaths that took place in Beijing," O'Connor sang. "It seems strange that she should be offended; the same orders are given by her."

Paul Weller's Style Council, meanwhile, lamented in the late '80s that "You know a third terms gonna cost the earth." She was also a frequent object of dark fantasies during her time in office, and her death represents a moment many artists have long been singing for. Elvis Costello wrote the haunting "Tramp the Dirt Down" in her honor, saying that "When they finally put you in the ground they'll stand there laughing." Morrissey's "Margaret On the Guillotine," meanwhile, gave us the lullaby, "When will you die? When will you die? When will you die?"

A few years ago, Wah! Singer Pete Wylie released a song called "The Day That Margaret Thatcher Dies," urging, "Let's celebrate." Sure enough, on Monday, he was on Twitter, expressing his only regret was that "I want her to die again." And it's a unique day in pop culture when you find yourself wondering if the Blow Monkeys, wherever they are right now, are indeed now celebrating that post-Thatcher "day after you" they dreamed of back in the '80s.

Her presence is felt strongly in films, and not just in Meryl Streep's Oscar-winning "Iron Lady." She's the force that creates the grim world of the young hero of "Billy Elliot"; she shows  up as an apron-clad flirt in a James Bond movie. Writer Hanif Kureishi called his "My Beautiful Launderette" "a satire on Thatcherite enterprise." As critic Peter Bradshaw has noted, you can see her influence all over both Peter Greenaway's "scathing satirical assault on the greed of the age, 'The Cook, the Thief, His Wife and Her Lover,'" and the dreamy, "heritage-chic" films of Merchant-Ivory. And if you were watching British television in the '80s, Thatcher was simultaneously the leader of a nation, an omnipresent Spitting Image puppet, and a thinly disguised "vicious and egotistical alien ruler who banned outward displays of unhappiness among her downtrodden people" on "Doctor Who."

What was it about the Iron Lady? In the same era, on the other side of the pond, Ronald Reagan certainly had his moments of pop culture presence -- from the Ramones' " Bonzo Goes to Bitburg" to Phil Hartman's "Saturday Night Live" depiction of him as a cool mastermind hiding behind a doddering persona. But his legacy today is as the patron saint of the GOP, not a reviled star of pop songs.

Surely some of Thatcher's fascination rests purely in her womanhood. She was the first female British prime minister, a ferocious force in pearls and a bouffant. She had to face the blazing sexism of her peers and countrymen, and accept regular assessment as a "shrill" "housewife" "bitch." It's a legacy that has inspired both eternal contempt and grudging admiration.

On Monday, as the remembrances poured in, it was her status as a female trailblazer – as well as, by the way, an often disastrous yet perpetually reelected world leader -- that found its way into much of the postmortem conversation. The Telegraph dubbed her "the ultimate feminist icon" while in Slate, Lionel Shriver recalled her "muscular feminism." It was an unusual assessment of a woman who once said, "I owe nothing to women's lib. The feminists hate me, don't they? And I don't blame them. For I hate feminism. It is poison." Yet the persistent notion seems to be – sure, she was reviled to such an extent that people wrote songs wishing for her demise, but hey, she got a lot of attention and she was successful in a man's world, so … partial victory, ladies?

I'm going to go with a "no, thanks" on that one. I felt much the same way in 2008, shuddering when a female friend declared that even if Obama didn't win, we'd have a woman as a vice president -- and isn't that an advancement for women? (Spoiler: It is not.) Women in leadership who are frighteningly bad leaders are not a win for the team. A lady – any lady, like, say, the one who helped cripple labor unions and led her nation to record-breaking childhood poverty – is not now or ever will be cause for any sentence starting with the phrase, "Say what you will about her but…" something something feminism.

The effects of her reign still ripple out in the lives of men and women both in her home country and far beyond the U.K. If the depictions of her in popular culture were excessively cruel because of her sex, it doesn’t diminish the cruelty of her own policies either. And if, in the book of history, Margaret Thatcher is ultimately remembered more as a grotesque puppet than a feminist icon, that's just fine with me.