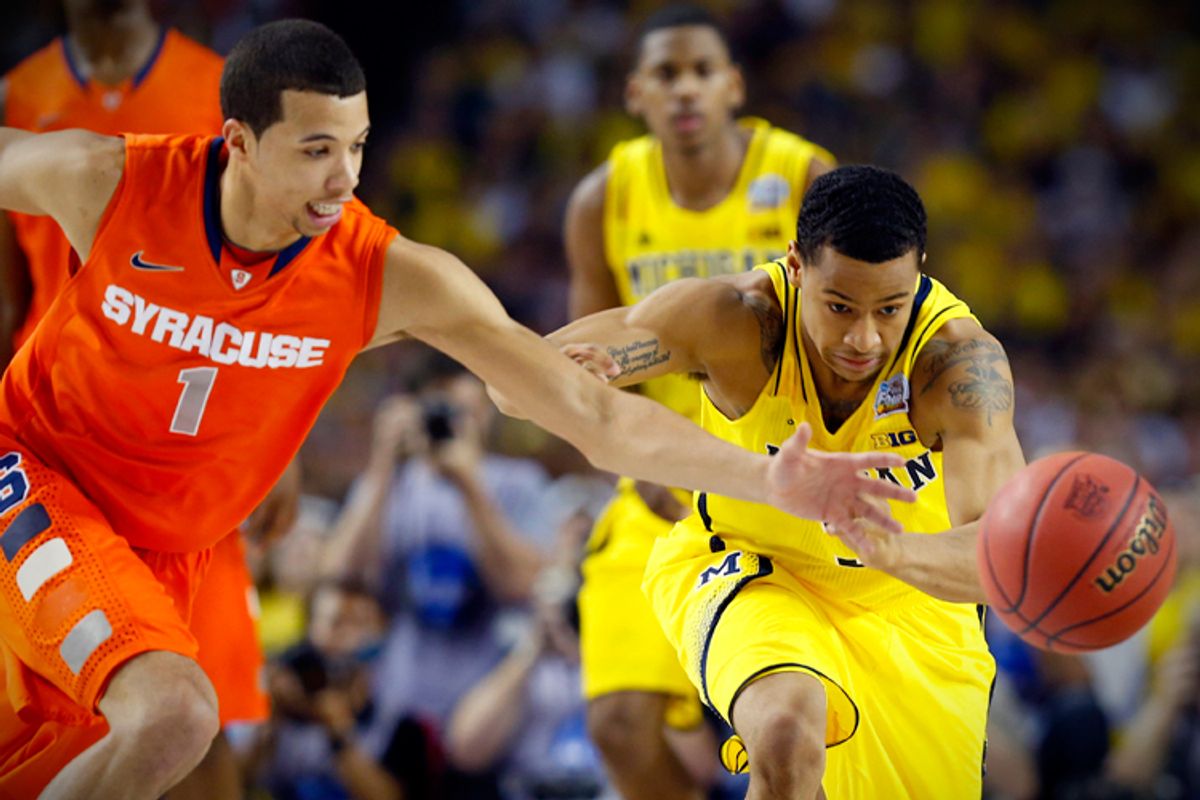 Syracuse's Michael Carter-Williams and Michigan's Trey Burke lunge for the ball during their Final Four game on April 6. (Reuters/Chris Keane)
--

Big-time sports are mirrors -- we blast our hopes, dreams, aspirations and fears at them knowing that part of their appeal is in how they metaphorically reflect back dramatized versions of real life. The Olympics becomes a proxy battle between our nation and the international boogeymen of the day. Professional leagues provide a safe forum for cities to express their all-too-real resentments against one another. The underdog players competing against better-equipped rivals embody our culture's populist David-versus-Goliath mythology.

This latter metaphor, with its impossible-to-predict outcomes and upsets, is supposed to define the NCAA's March basketball tournament. So obsessed are we by the "madness" of possible upsets and Cinderella stories that bracketology is now a national gambling ritual conducted in most workplaces, from the White House on down.

But what if March Madness is celebrating something that shouldn't be celebrated? What if the rags-to-riches, up-from-the-bootstraps metaphor that makes the tournament so appealing is the wrong one? What if, instead, the NCAA tournament is really a metaphor for something darker, more sinister and more disturbing about our society?

As I periodically tune in to the games -- and alternately cheer and lament the upsets, depending on the outcomes -- I can't shake the feeling that I'm watching not some heartwarming parable, but a Hunger Games-like tale that microcosmically embodies darker trends. That's because when you look beyond the the dunks, blocked shots and turnovers and behold the tournament as a business, you are looking at both a reminder of our troubling history and a reflection of the present moment.

The NCAA basketball tournament is a $700-million-a-year business in which most of the cash ends up enriching coaches, athletic directors, school administrators, NCAA executives and multibillion-dollar corporations (universities, advertisers, media companies, etc). Only a relatively small fraction of those resources actually goes to remunerate the workers -- read: athletes -- whose labor product is being sold. Indeed, those remunerations, which come in the form of scholarships, are so small that many don't cover the full cost of college. And thanks to draconian NCAA rules that bar players from being paid, those athletes have no way of claiming more of the financial dividends of their own work.

Sounds familiar, right? Well, it should in two ways.

First and foremost, with big-time college sports disproportionately composed of minority players, there is the "unmistakable whiff of the plantation (or) colonialism," as civil rights historian Taylor Branch says.

"College sports, as overseen by the NCAA, is a system imposed by well-meaning paternalists and rationalized with hoary sentiments about caring for the well-being of the colonized," he wrote. "The noble principles on which the NCAA justifies its existence -- 'amateurism' and the 'student-athlete' -- are cynical hoaxes, legalistic confections propagated by the universities so they can exploit the skills and fame of young athletes."

As CNN/Money recently reported, after-tax corporate profits are now at "their greatest percentage of GDP in history ... but the record profits come at the same time that workers' wages have fallen to their lowest-ever share of GDP." In all, Pulitzer Prize-winning economics reporter David Cay Johnston estimates that while corporations and the wealthy have seen their incomes skyrocket, incomes for the bottom 90 percent of Americans only grew by a grand total of $59 over the last half-century, leaving millions to struggle to make ends meet. And just like college players are handcuffed by a monied NCAA establishment that denies them the fruits of their labor, so too are American workers kept down by an enriched corporate establishment that busts unions, slashes wages and cuts benefits.

Thus, when we watch March Madness, we are not looking at a mere bread-and-circuses distraction from real life -- we are really looking at that reality in miniature.

To be sure, up until recently, most Americans weren't conscious of the microcosm before them. Games were seen only as games, and not what they really are: the biggest of big business. But as evidenced by the past week, that may finally, and thankfully, be changing.

Consider, for instance, the reaction to Kevin Ware's tragic injury. Instead of being merely a context-free spectacle of gruesome viscera, his broken leg spurred a serious national conversation about how injured college athletes can lose their scholarships and be saddled with injury-related healthcare bills for the rest of their lives.

At the same time, Sports Illustrated reports that a top college sports official, USC athletic director Pat Haden, is sounding the alarm about a class-action suit against the NCAA. Brought by former UCLA basketball star Ed O'Bannon and other former players, the suit demands that players receive "50 percent of revenue generated by NCAA and conference television contracts," according to SI.

"This is the most threatening lawsuit the NCAA has ever faced," said SI.com legal expert Michael McCann. "If O'Bannon prevails, it would radically change the economics of college sports."

What does that mean in practice? For starters, it might finally mean the end of the financially unsustainable increases in coaching and athletic director salaries. It might also mean serious resources for athletes' financial security -- specifically, programs that guarantee athletes no longer have to worry about an injury jeopardizing their educational financial aid or relegating them to a life spent paying off medical bills. And if sports is, in fact, a microcosm of real life, that progress may provide a prominent example of the value of workers demanding their own fair share in their own workplaces.

Two years ago, the high-profile labor fight between the NFL and its players did exactly that. Though some downplayed that battle as an unimportant squabble "between millionaires and billionaires," many came to see it as a far more significant fight by workers to recuperate more of the hard-earned fruits of their labor. As sportswriter Dave Zirin put it: "What you saw this time, unlike previous sports labor struggles in decades past, is you saw the public actually siding with the players, and the owners were not expecting that, and that made it not just a victory for the players themselves, but it made it a broader social and political victory, as well."

The attention now being paid to the NCAA's inequities is the logical outgrowth of that earlier victory. With tonight's National Championship game overshadowed by questions of fairness and human rights for players, another fight for justice is obviously brewing, another victory may be forthcoming, and a positive ripple effect on a sports-crazed society could be imminent.

If sports are where we project our aspirations and dreams, such a constructive far-reaching outcome is a grand aspiration worthy of our dreams. It is a realistic goal to strive for as the NCAA basketball season comes to an end -- and as the next step in the fight for economic fairness begins.