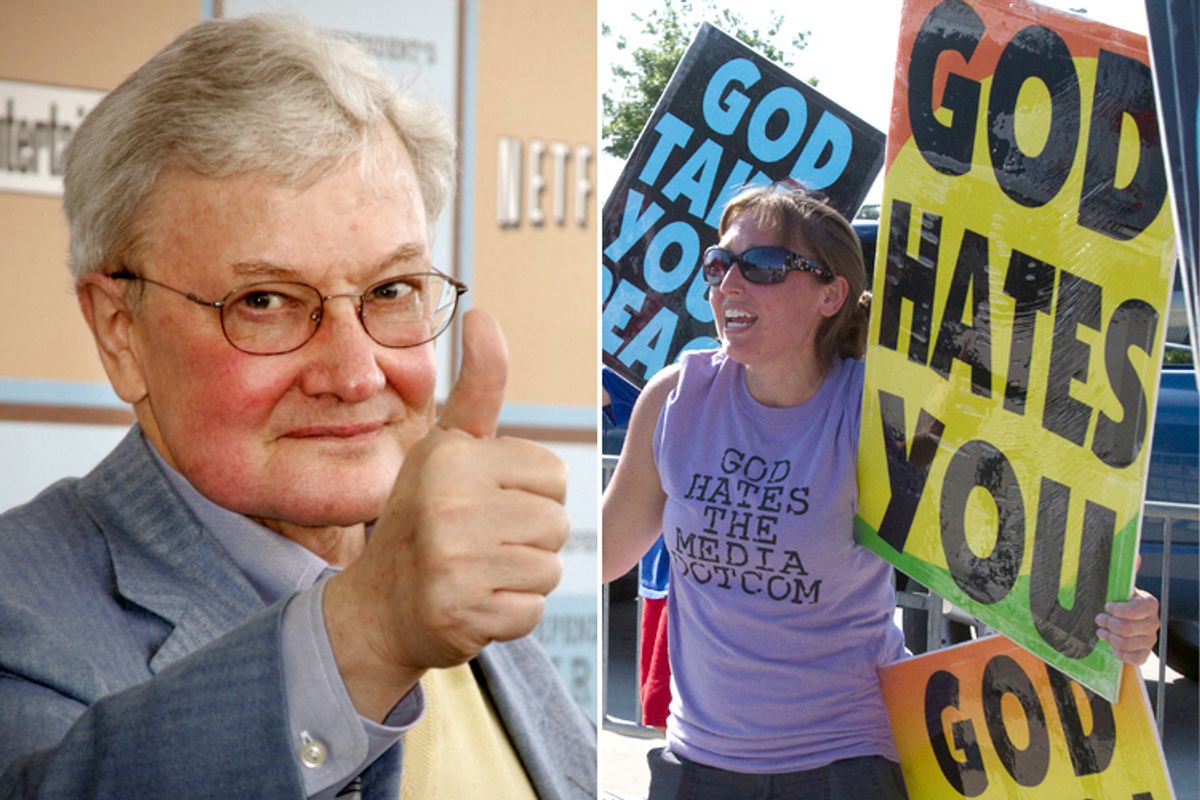 It should come as absolutely no surprise that the attention-whore hate group Westboro Baptist Church announced this weekend it would protest the funeral of Roger Ebert. Ebert, after all, stood for everything WBC will never possess – tolerance, exuberance, rational thought. What is surprising is how blatantly retaliatory this particular protest is – and how it appears to have been prompted by a Salon story.

Twice on March 25, Ebert tweeted a link to a Salon excerpt from Jeff Chu's new memoir, "Does Jesus Really Love Me?" In it, Chu, a gay man, goes undercover in the Topeka, Kan.- based "church," where he spends a day picketing with the group who believes that "Spreading their gospel is their duty and their gesture of kindness to a hell-bound world." It just happens that their method of spreading the love involves screaming, "I don’t even know what’s growing inside your crusty assholes!" at gay men.

Kindness was Ebert's template too, the word he used to describe "all of my political beliefs." He just practiced it a little differently. He was gentle even in his tweets about the Chu story, describing at as "Just another day at Westboro Baptist." But the WBC didn't take too kindly at all to "fag enabler" Ebert's attentions. In its press release regarding the protest, Westboro notes that "American entertainment industry publicity leech Roger Ebert took to Twitterverse to mock the faithful servants of God at Westboro Baptist Church" shortly before his demise. For a group that adores a spotlight, it sure gets touchy whenever anybody prominent talks about it.

Had he not recently given it the benefit of his notice, it's entirely likely the WBC would have decided to show its hateful face at Ebert's funeral anyway. Anywhere there's a large gathering of grieving, vulnerable people – and a few film crews – you're likely to find it. This is the same bunch that just a few months ago decided it would be cool to show up spouting hate at the funerals of the children massacred at Sandy Hook. What's one dead film critic to that? Especially one who was notoriously liberal. When you consider that the WBC's criteria for gathering a group and screaming are simply being newsworthy and dead, Ebert went the extra mile. You could give him the Wrath of God Incitement Award for penning "Beyond the Valley of the Dolls" alone. And that fact that he was an atheist would surely make a hellfire and brimstone type's head explode. (If only that were literally possible.)

Yet the acknowledgment from the WBC that Ebert had helped illuminate the story of a homosexual arriving in its ranks certainly looks like a whole lot of pouty foot stamping. It must be embarrassing for the group, especially coming at a time when the most attention it's been getting has been for the noisy defections of its family members and the addition of a rainbow-colored "equality house" to its headquarters' neighborhood. While the public response to the church grows ever clearer and more inventive, its antics grow ever more tiresome and predictable.

So if on Monday a handful of loud kooks want to show up to bleat invective about a man who was beloved for his generosity and insight, well, that's just par for the Westboro course of action. As one of its followers told Chu when he was among them, "If the Lord hasn’t given you the heart to hear, you just won’t understand." But no amount of obnoxious, clearly spiteful tantrum throwing can take away the victory of Roger Ebert, the man who said, "I believe that if, at the end, according to our abilities, we have done something to make others a little happier, and something to make ourselves a little happier, that is about the best we can do," and who did his best with grace and class, right up to the end.