The Republican who can save gun control

Sen. Pat Toomey, now the pivotal vote on gun control, supported background checks in the past -- will he again? 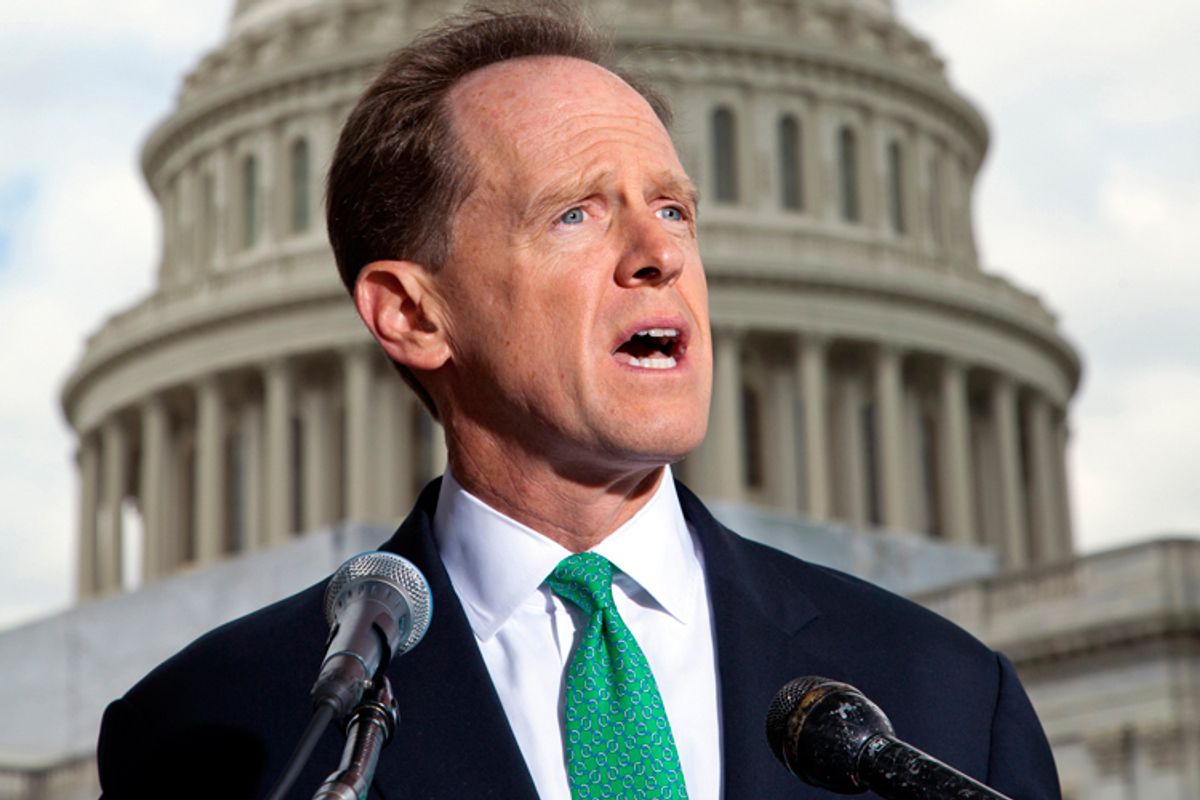 If the Senate has any hope of expanding background checks to private gun sales, it may rest in the hands of Pennsylvania GOP Sen. Pat Toomey, who has emerged as the pivotal lawmaker on the issue as Congress reconvenes for a do-or-die week on gun control. Toomey, a Tea Party-backed conservative with an "A" rating from the NRA, is a bit of a surprising choice, but he has supported closing the so-called gun show loophole in the past.

After a fruitless campaign to win the endorsement of Oklahoma Republican Sen. Tom Coburn, Democrats turned their attention to Toomey, hoping his co-sponsorship of a gun control package will give moderates of both parties political cover they need to vote for the bill.

In 1999, after the Columbine school shooting, the Senate passed a bill to close the gun show loophole, but the House killed it. Toomey, then in the lower chamber, voted for the GOP alternative to the Senate bill that would have expanded background checks to all sales at gun shows, but lowered the time required from a check to 24 hours from the three days favored by Democrats.

At a townhall meeting in July of 1999, the Allentown Morning Call reported that Toomey took heat from pro-gun activists on his vote, but that he defended it as a measure that would prevent crime, close the gun show "loophole," and protect law abiding citizens from undue burden. "On balance, I think it was a good bill," he told the crowd.

Later, when the House officially killed the Senate bill, he lamented, "Some members of the House defeated a good, reasonable crime bill."

In a debate against his Democratic opponent when he ran for the Senate in 2010, Toomey said, "Well, I think we should make sure we have a very sophisticated and adequate background check mechanism to make sure that terrorists, certainly, and other dangerous people."

Toomey is also a strident conservative from a bluish state, so to win in 2016, he'll have to show he can reach across the aisle on at least a handful of issues. The moderate suburbs around Philadelphia are politically crucial to any statewide candidate, and are favorable to universal background checks, so the politics may line up for Toomey to work with Democrats here.

It's not much, but given the current paranoia on guns in the Senate, that makes Toomey something of a moderate on background checks. The question is whether he will stay true to that earlier position, or flip flop on it, as so many of his colleagues have.