Can the Great Depression help solve our unemployment crisis? 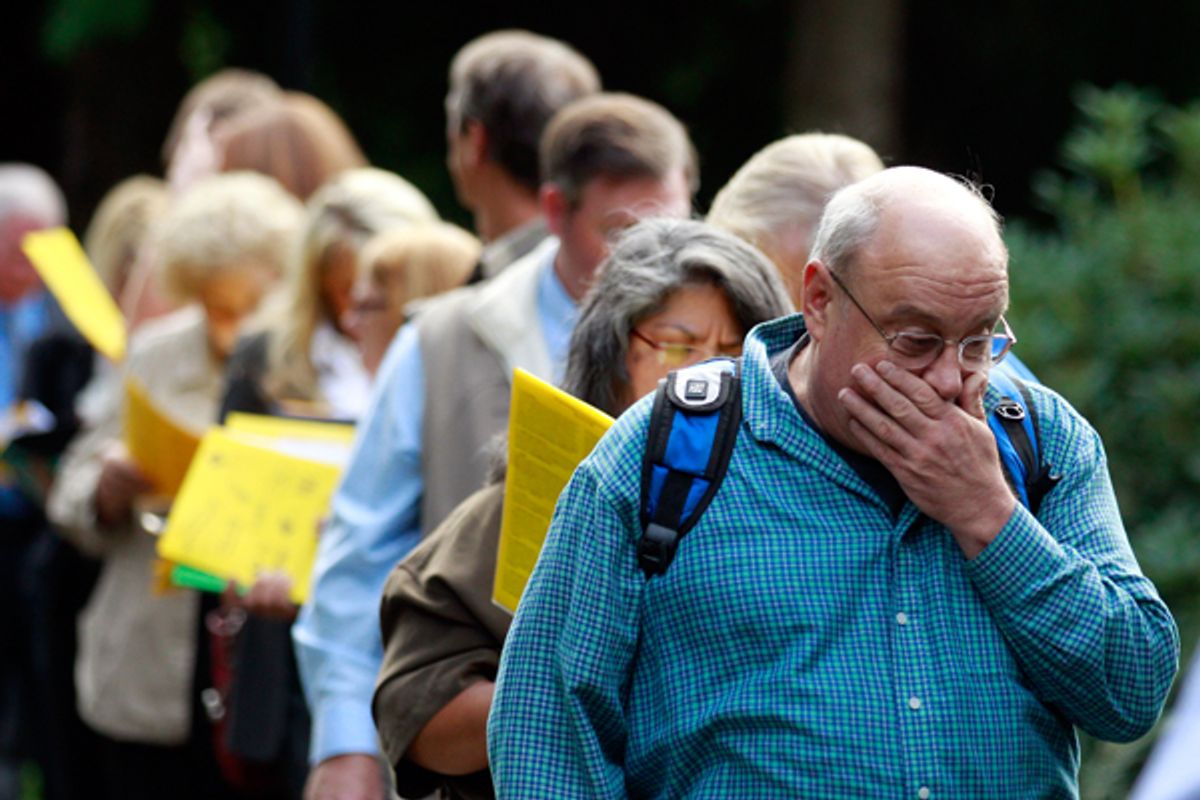 The question we must ask today, as we remember the Works Progress Administration is: why isn’t there the political will to take dramatic steps to address today’s jobs emergency?

Let’s start with the obvious; there was a far greater share of Americans unemployed in the Great Depression. In 1934, unemployment peaked at 24.9%.  One-out-of-four people officially out of work is much more of a crisis than one-out-of ten (9.6%), the peak in the current recession in 2010. The impact is even greater than two-and-a-half times, as such a huge drop in consumer spending means that marginal businesses able to survive 10% unemployment rates were swept away in the Depression. And during the Depression – much more than now – it was impossible not to know people whose lives had been devastated.

The other obvious difference is that we have cushioned the impact on the unemployed through the establishment of New Deal programs, notably unemployment insurance, which is providing income to half of the more than 12 million people who have been laid off, and Social Security, which has helped older workers unable to find a job. In a broader sense, the bailout of the financial sector in 2009 was a lesson learned from the New Deal, stopping the Great Recession from becoming a second Great Depression.

For most middle-class Americans, the Great Recession was not a sudden shock to a prosperous lifestyle. It was a deepening of a three-decade long trend of families seeing their incomes and lifestyles squeezed by stagnant wages and eroding benefits. Median household income increased in real terms by only 14% from 1972 to 2007.  During this period, the richest Americans captured most of the benefits of economic growth: their share of national pre-tax income of the top one-in-a thousand quadrupled from 3% to 12%. Much of the meager growth through 2007 was lost in the Great Recession; by 2011 median household income had dropped below 1996 levels.

Of course, the Great Recession did real harm to tens of millions of Americans, as Wall Street took away their retirement savings and banks took away their homes. The more than 20 million who are out of work or working less than they would like feel the pain every day. However, most people whose homes were foreclosed are not on the streets, and the long-term unemployed are scraping by and aren’t in bread lines. Additionally, the retirement crisis — another slow-moving crisis — represents a long-term crippling of prospects rather than an immediate disaster.

The New York Times coverage of Friday’s weak jobs report highlights the slow motion nature of today’s jobs crisis. The Times focused on a report by the National Employment Law Project, written by Roosevelt Institute Fellow Annette Bernhardt, that revealed most of the new jobs emerging from the Great Recession pay low wages. The Times article also highlighted the persistent growth in temporary jobs, and concluded with a quote from NELP Executive Director Christine Owens, underscoring the nature of today’s job crisis:

“This seems to be a long-term sleeper crisis too, as we think about long-term unemployed workers who are in midlife and older workers who are likely dipping into retirement savings in order to stay afloat. We’re setting ourselves up for somewhere, 10 years down the road, when a lot of retirees who didn’t expect to live in poverty are going to be in poverty.”

For those of us who understand that we do have a jobs emergency today — even if it is a slow-motion disaster — the question is, how do we create the political will to address the underlying crisis? The answer is to make jobs the central issue in the bigger story about the economy, so that the concerns of the unemployed are the same as the great majority of Americans who are employed.

The economy and jobs remains by far the top issue of concern to Americans. As a March Pew Research poll found, “Despite substantial public awareness of recent gains in the stock market and rebounding real-estate values, the percentage saying economic conditions will get worse over the next year has risen to its highest point in nearly eight years.”

We need to be consistently telling our story: the crushing of the middle class did not happen by accident. It is a result of decisions to cut taxes for the wealthy, stop investing in infrastructure, destroy the ability of unions to organize, saddle college students with huge debts, and deregulate Wall Street. We need to remind people that the stock market is at record levels because powerful corporations are making huge profits by cutting wages and benefits and shipping jobs overseas.

We need to champion our vision of an economy driven by working families and the middle class. We need to show how we can rebuild the middle class by deciding together to provide “good jobs for everyone in America.” We should put forth a bold program, which addresses all three aspects for our vision:

There are promising efforts already taking place to build a movement around these issues — efforts to innovate new approaches to organizing low-wage workers; campaigns to press for higher minimum wages and paid sick days; and local initiatives to create good paying green jobs. Progressives in Congress have put forth comprehensive jobs bills and President Obama is touring the country asking for investment in infrastructure.

Building a movement that is big enough to address the jobs emergency will require tackling the basic tenants of our financialized, trickle-down economic paradigm. For everyday Americans, the stakes could not be higher. We have no choice but to build the political will to create a 21st century America that works for all of us.

Richard Kirsch is a Senior Fellow at the Roosevelt Institute, a Senior Adviser to USAction, and the author of Fighting for Our Health. He was National Campaign Manager of Health Care for America Now during the legislative battle to pass reform.