Is Brandon Cronenberg's icy, nightmarish "Antiviral" a tribute to his dad's '70s films, or an Oedipal assault? 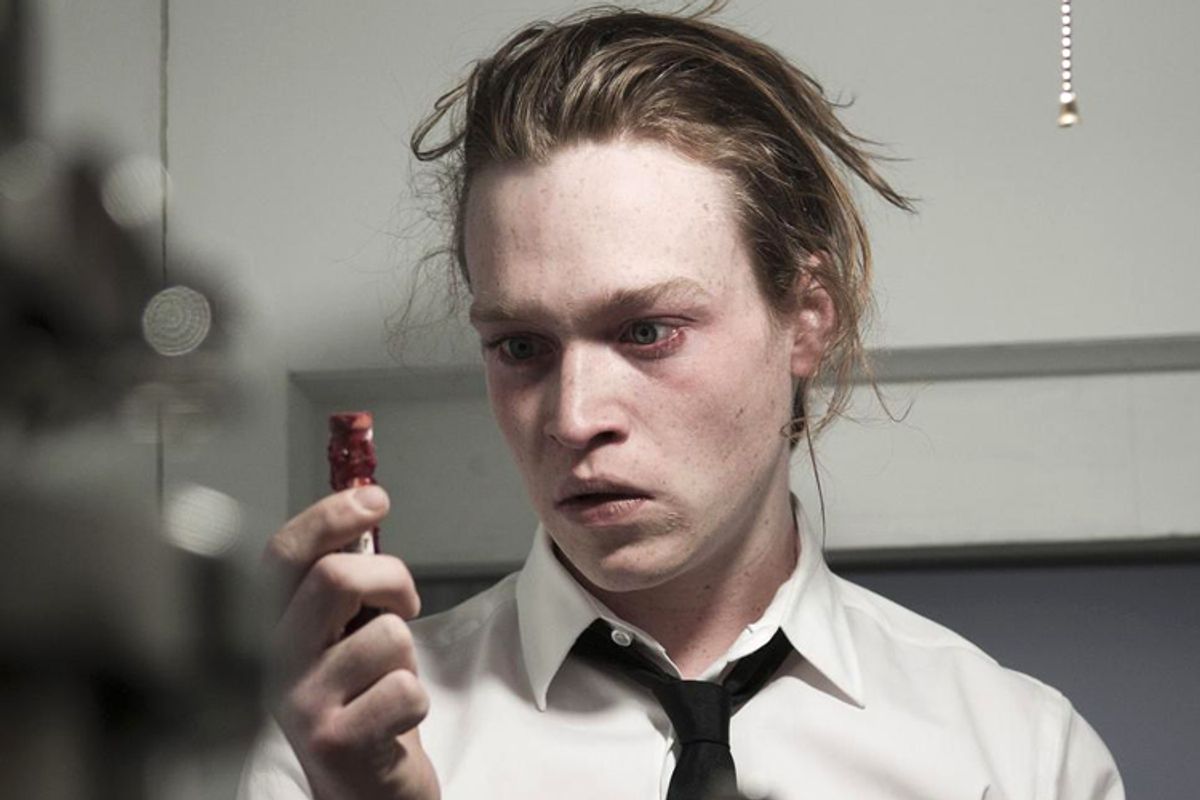 With its clinical, anonymous interiors, its icily sardonic manner and its vision of a profoundly disordered human future in which celebrity worship merges with cutting-edge biotechnology, the Canadian horror-thriller “Antiviral” would remind viewers of David Cronenberg’s early films no matter who had directed it. But since it’s the debut feature from writer and director Brandon Cronenberg, David’s son, the comparison immediately gets complicated. I’m honestly not sure whether it’s ingenious or foolhardy of the younger Cronenberg to go right at his dad’s legacy this way – quite likely it’s both. At any rate, he’s created an interesting decoding problem for viewers, along with an intriguing low-budget chiller that deserves to be seen on its own terms.

Syd March (Caleb Landry Jones of the TV series “Friday Night Lights”) is a pallid, cherubic young man nearly always seen in a ponytail and an undertaker’s suit who sells a bizarre commodity: live infectious virus harvested from diseased celebrities. In pushing his lab’s latest concoction, a flu bug garnered from an ice-blond cover girl called Hannah Geist (Sarah Gadon), he purrs to a potential client: “Perfect, isn’t she. She gives me shivers.” Now, OK – did that line just come out that way, in Cronenberg’s script, or is he winking at his dad’s first hit, the 1975 sexual-parasite saga “Shivers” (known to American viewers as “They Came From Within”)? And should we understand all the echoes of and allusions to David Cronenberg’s movies in “Antiviral” – I can strongly feel “Rabid,” “Videodrome” and “eXistenZ,” at the very least – as a work of collaboration and tribute or an Oedipal assault?

Here are a couple of things to make clear: This isn’t a David Cronenberg film by proxy, no matter how much some people want to read it that way. His name appears nowhere in the credits, and none of his normal crew members worked on the film. (The one Cronenberg crossover I can see is that Sarah Gadon played Robert Pattinson’s on-screen wife in “Cosmopolis,” David’s last film.) Furthermore, while the subject matter and setting of “Antiviral” are right smack in the middle of late-‘70s Cronenbergian “body horror” territory, Brandon has a very different sensibility from his father. There are only a few dry traces of the anarchic humor often found in David’s early films, and the combustible blend of erotic fear and desire is likewise absent. “Antiviral” is a cool, voyeuristic film structured like a 1950s American crime drama, with an impassive and androgynous protagonist who does what he must to survive but reveals as little as possible.

At first the central metaphor at work in “Antiviral” – celebrity culture rendered as a contagious disease and even a cannibal cult – feels both overly obvious and overly intellectual, as if the screenplay emerged from a bout of reading Michel Foucault. But by stubbornly sticking with it and pushing it to ludicrous extremes, Cronenberg achieves a kind of heightened reality that does not resemble the real world but possesses its own internal logic. In a world where people pay to be infected with celebrity herpes, it makes sense that water-cooler gossip focuses on the burning question of whether Hannah Geist was born without a vulva and requires custom-made underwear, and that TV news shows carry breathless updates on the condition of supermodel Aria Noble’s anus. Muscle tissue taken from Aria and Hannah is even grown in labs, then sliced up and sold as three-ounce steaks in special celebrity butcher shops. (It looks a little like whale blubber or whipped Styrofoam, but Syd eats it without complaint.)

While the plot of “Antiviral” involves a complicated skein of double-dealing and skulduggery worthy of film noir, it’s arguably a lot less important or interesting than the dystopian setting or the overtly Cronenbergian dream sequences in which Syd imagines himself merging with the dying Hannah or turning into a machine. (The outstanding cinematography is by Karim Hussain.) Syd has been smuggling virus cultures out of the lab in his own body and reselling them to sinister characters on the black market, but in the process has sickened himself with a genetically engineered Hannah Geist bug that is both incurable and extremely valuable. So he’s simultaneously the hero of the story and its MacGuffin, since both the shadowy villains and the entourage around the dead or dying Hannah want what’s in his bloodstream.

How high is the gross-out factor, and the level of postmodern grad-school self-referentiality? Pretty doggone high; whenever Syd’s not hobbling around on a cane trying to solve the mystery, he’s getting tied down to have needles jammed into him or tissue samples extracted. And somewhere there must exist an outtake reel of bloody spit-takes that didn’t make it into the finished movie; I look forward to seeing it on YouTube any day now. Rather than seeing “Antiviral” as David Cronenberg’s covert return to his horror-movie roots, or as an unsatisfactory attempt by his son to replicate the creepazoid magic of years gone past, I’d rather understand it as something new. Brandon Cronenberg clearly understands that he has to deal with the legacy of his last name, and “Antiviral” feels to me like a perverse act of exorcism, half tribute and half cleansing ritual. He has feasted on the flesh and infected himself with the disease; what will he do next?

"Antiviral" opens this week at the IFC Center in New York, with other cities to follow. It's also available this week on-demand from cable, satellite and online providers.