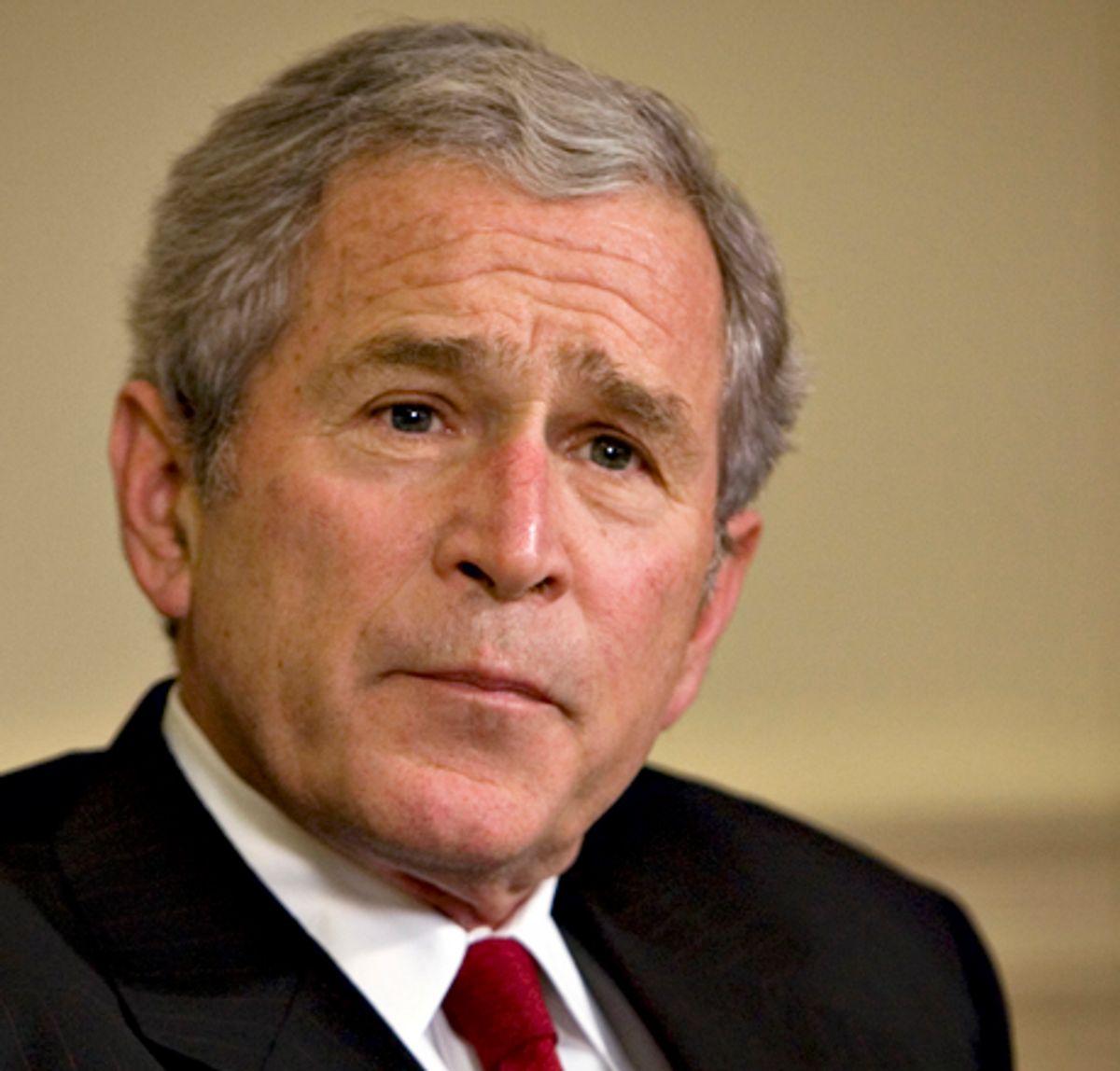 According to reports, President Barack Obama hopes that his legacy may include a “grand bargain” in which Republicans agree to tax increases on the rich if Democrats will agree to cuts in benefits for the elderly, including cuts to Social Security brought about by “chained CPI” (a different way to adjust Social Security benefits for inflation).

Here is the president’s idea of shared sacrifice among the many and the few (courtesy of Dean Baker): Barack Obama proposes a painful hit to middle-class and working-class seniors, in return for an increase on taxes on the rich so small that they will hardly notice. Bargain? Yes. Grand? Not so much.

By legitimating changes that could lead over time to the conversion of Social Security into a means-tested program for the elderly poor only, Barack Obama has proven himself to be a true and worthy successor of his predecessor, George W. Bush.

This is not intended as hyperbole.  In any given era, presidents and Congresses of both parties tend to share a consensus. Eisenhower and Nixon, for example, shared much of the New Deal consensus with Roosevelt and Johnson.

So it is in our time. Future historians will note that Bush and Obama alike both successfully expanded access to healthcare goods and services for Americans — but at the price of massive government subsidies to for-profit corporations as an alternative to the cheaper and more efficient expansion of public, nonprofit, low-cost social insurance. And the historians of the future will note that both the Republican president and his Democratic successor directly attacked the structure of Social Security as a universal program that pays promised benefits.

The two greatest expansions of the welfare state since Medicare’s enactment in 1965 — Medicare Part D under Bush in 2003 and the Affordable Care Act (“Obamacare”) under Obama in 2010 — both repudiated the logic of New Deal/Great Society insurance programs like Social Security and Medicare in favor of a radically different and far less efficient strategy of using tax credits for individuals to indirectly subsidize private provider monopolies and oligopolies.

The parallels between Bush’s Medicare Part D and Obama’s Affordable Care Act extend further. In the case of each piece of landmark legislation, politicians beholden to provider oligopolies wrote the law to prevent competition or regulation from forcing the subsidized providers to lower the payments they can extract from the American public.

The law creating Medicare D included a clause that bans the federal government from negotiating lower prices for prescription drugs sold to seniors under the program. One study found that Veterans Administration drug prices had a median price difference 58 percent lower than the cheapest drugs bought under Medicare Part D.

The equivalent of the non-negotiation clause in the Medicare Part D legislation exclusion of a public option, which might have pressured insurance companies to contain prices, from the Affordable Care Act. All-payer regulation, the method to contain health costs used by almost all other governments, including those like Switzerland that rely on private health insurers, is not allowed to be mentioned in discussions of healthcare cost containment by centrist Democrats and conservative Republicans—a measure of the success of America’s grossly overcompensated pharmaceutical companies, hospital corporations and physicians in intimidating politicians and censoring public debate.

The similarities between Bush and Obama continue. Each president, having successfully promoted a huge giveaway to subsidized corporations in the healthcare industry in his first term, began his second term with an attempt to cut Social Security.

Bush’s campaign to partly privatize Social Security by carving out private retirement savings accounts failed. It was unpopular in his own party as well as among Democrats and independents. Obama’s proposal to use chained CPI to cut Social Security would promote its privatization by the back door rather than the front door. All cuts to middle-class beneficiaries of Social Security and Medicare are, in effect, a form of back door privatization, inasmuch as they will tend to force middle-class Americans to pay higher premiums for healthcare insurance and save more in tax-favored retirement savings accounts from which unregulated, for-profit money managers can rake excessive fees.

The final parallel between Bush and Obama involves their truly remarkable indifference to public opinion and their deference to the opinion of the 1 Percent. According to a new poll, 87 percent of voters over 50 think it is “very important” not to cut Social Security, while 69 percent “oppose” or “strongly oppose” chained CPI. Only 16 percent of voters support Obama’s proposal. That didn’t deter Obama.

The indifference of both Bush and Obama to the opinion of their own voters about Social Security reflects, not their courageous statesmanship, but their accurate understanding of where real power lies in our nominal democracy. Both Bush and Obama crafted their Social Security plans solely with an eye to the approval of the bipartisan economic elite, most of whom prefer cutting Social Security benefits, which they don’t need, to raising taxes on members of their class.

Cui bono — who benefits? The incremental privatization of entitlements is a kind of slow-motion TARP, transferring money from the public sector to favored private industries. To use another metaphor, gradual privatization is a rolling IPO of Social Security and Medicare, sold off by our elected representatives to well-connected political donors. The rentier interests that eye potential superprofits in the slow-motion privatization of social insurance don’t care whether the objective is reached by a Republican president promising an “ownership society” or a Democrat like Obama repeating 20-year-old New Democrat talking points about “cut-and-invest,” as long as their subsidized politicians in both parties get the job done.

If it is brought about soon enough, the piecemeal replacement of public social insurance by for-profit private retirement and healthcare plans will help to compensate some investors among the 1 Percent for the losses they suffered after the collapse of the housing bubble. Investors who own shares of the for-profit retirement income and healthcare companies, created or expanded to exploit reforms like Bush’s and Obama’s, will be guaranteed a perpetual stream of profits, as more and more Americans are forced off social insurance into effectively compulsory private sector alternatives. A tiny portion of those profits, recycled periodically in the form of campaign donations and subsidies to friendly think tanks, journalists and academic institutes, should be enough to keep the new system safe from attack by liberals and populists.

Building on what Bush began, Obama has continued the incremental rollback of Franklin Roosevelt’s Social Security and Lyndon Johnson’s Medicare. In the area of healthcare, he has herded his fellow Americans into the grip of fee-extracting for-profit medical, insurance and finance industry oligopolies, without adequate protections. In the area of retirement policy, even if his chained CPI proposal fails, for generations to come conservatives can say: “Even Barack Obama agreed on the need to cut Social Security benefits for the middle class.”

Obama’s ultimate, if unintended, legacy may yet be the eventual annihilation of Medicare. Once Obamacare is up and running, we can expect conservative and centrist pundits and politicians to ask why there should be two healthcare systems — one for working adults and another for the elderly. We can expect proposals to replace Medicare with for-profit Obamacare for the elderly. And we can expect campaign contributions from the medical-insurance complex to find their way to “centrist” Democrats proposing “progressive voucherization,” along the lines of the euphemistically named “premium support” plan that was advocated in 2010 by Democrat Alice Rivlin and her co-author, Tea Party Republican Paul Ryan.

Barack Obama is said to be concerned about his legacy. Unfortunately, when it comes to healthcare and retirement security for middle-class Americans, it is clear that Obama’s legacy shares a lot in common with that of George W. Bush.