U.S. forces pulled down the statue 10 years ago today. Now one Marine doesn't want that flag used as propaganda 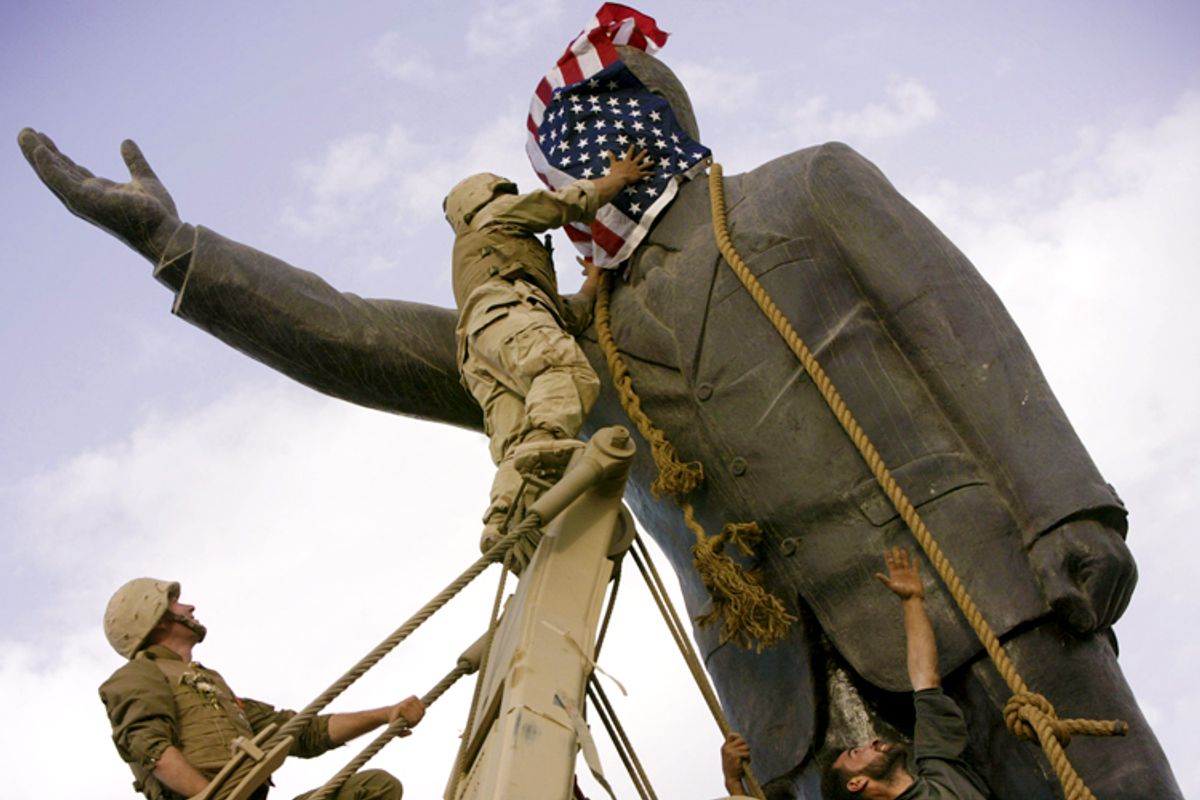 Cpl. Edward Chin, of the 3rd Battalion, 4th Marines Regiment, covers the face of a statue of Saddam Hussein with an American flag before toppling the statue in downtown in Bagdhad Wednesday, April 9, 2003. Moments later the American flag was removed. (AP/Jerome Delay)
--

Ten years ago today we watched as a U.S. Marine hung an American flag on the face of the Saddam Hussein statue in Baghdad’s Firdos Square. The image seemed to make good on the promise that President George W. Bush made standing atop the still-smoldering rubble of the World Trade Center, telling a grieving and revenge-hungry nation, “I can hear you, the rest of the world hears you, and the people who knocked these buildings down will hear all of us soon.”

Forget the fact that Iraq had no part in 9/11; the United States had planted its flag in the heart of the Middle East, from whence, roughly, the hijackers came. The media dutifully praised the symbolism of the moment as the Saddam statue was then toppled by an oversize military tow truck. On CNN, Bill Hemmer said the scene brought to mind “indelible moments like the fall of the Berlin Wall,” and Wolf Blitzer declared it “the image that sums up the day and, in many ways, the war itself.”

Of course, this was all before the nonexistence of WMD, the brute existence of Abu Ghraib, and the tragic deaths of more than 4,400 American soldiers and more than 100,000 Iraqi civilians. Taken on its own terms, the televised scene at Firdos Square on April 9, 2003, was a fraud. Not only was the war far from over, but the crowd topped out at just 300 people and was mostly composed of Marines and members of the Western press, according to analysis by the journalist Peter Maass.

For all of those reasons, the flag has become more burden than trophy for Tim McLaughlin, the Marine who trucked the now-famous flag in his duffel across ocean and desert and back again. It's become a symbol of the sanitized idea of war, of the lies and myths that nations spin to burnish their aggression. And that's why he’s hidden the conflicted banner away in a safety deposit box in a small-town bank in New Hampshire.

McLaughlin's flag calls to mind another flag co-opted into American wartime mythmaking: on Feb. 23, 1945, when five Marines and a Navy corpsman planted the Stars and Stripes atop Mount Suribachi during the battle of Iwo Jima. With reverse echoes to Firdos Square, the Pulitzer Prize-winning photo that rendered the event announced retribution for Pearl Harbor, victory over Japanese militarism, and America’s arrival as a global power.

But as at Firdos Square, the flag raising at Iwo Jima was a pseudo-event. The World War II version was staged for the benefit of the former banker and then-U.S. Secretary of the Navy James Forrestal, who, while watching a similar scene hours earlier from a safe distance, relayed to Marine 2nd Battalion Cmdr. Chandler Johnson that he wanted the flag as a personal souvenir. Johnson was insulted, and staged the raising of a second flag so that the symbol Forrestal would sail away with – the one captured in Joe Rosenthal’s famous photograph – would not be the genuine article. The original would stay with the battalion. But the power of the picture made the second flag as real as the first one, and so neither Forrestal nor the soldiers who hoisted the original got to claim their trophy, as history mandated both flags come to rest side-by-side in the National Marine Corps Museum at Quantico — neither one quite authentic, both coexisting in a feedback loop between real and unreal.

Rougly 60 years later, Quantico came calling for the Firdos Square flag, too, but McLaughlin succeeded where Forrestal and the Marines at Mount Suribachi didn’t. He decided not to return the Marine Corps museum’s phone calls and kept his flag tucked away in the safety deposit box in New Hampshire, for fear that the museum would hold up his flag the same as the media did during the so-called fall of Baghdad, when the image of Saddam draped in Old Glory was broadcast across the globe as some Iraq War version of Iwo Jima.

“That’s one of my frustrations,” McLaughlin, now a 35-year-old lawyer in Boston and the president of Shelter Legal Services, which provides free legal advice and representation to homeless and low-income veterans, told me. “Because for me it was a period of death and killing people. I don’t like that it facilitated the media’s narrative of wars as neat and tidy things, so that’s why when I got back home I just put it away.” McLaughlin’s flag could not have been more directly born of 9/11. Purchased at the Senate Gift Shop by a staffer to Sen. Charles Schumer and a friend of McLaughlin’s sister-in-law, the flag was given to the young Marine in the days after al-Qaida struck in Washington, D.C., and New York. It was offered as a thank you for his service, for not only had McLaughlin been charging through the smoke-filled halls of the Pentagon directly after it was hit by American Airlines Flight 77, but he was surely going to be among those sent to fight somewhere in the Middle East.

When he was finally deployed to Kuwait, where he would serve on the front lines of the Iraq invasion, McLaughlin brought the flag with him — not with the idea of holding it up as a symbol of American conquest, but rather to snap a picture of it in a foreign land, which he would later keep as one soldier’s personal record of war. Firdos Square just happened to be the first opportunity where the enemy wasn’t shooting at him.

“There was no big intention behind it,” said McLaughlin, who was a lieutenant when his tank company rolled into Baghdad. “My commander said, ‘Hey, Mac, when you got a moment, we wanna get a picture of your flag with Saddam's statue.’ As soon as it was done, I walked back to my tank and continued security for the rest of the day.”

For McLaughlin and his battalion, which had spent the previous three weeks charging through the desert from Kuwait while taking fire and casualties and giving it back tenfold, there was plenty of war left to fight, and a then-unforeseen insurgency that would turn Iraq into the worst foreign policy debacle since the Vietnam War, if not in U.S. history.

It was another few weeks before McLaughlin knew his flag had gone viral, when a backlog of mail containing newspaper clippings from that eventful day caught up with him on a defensive perimeter outside of Baghdad. Among the front-page headlines that accompanied photographs of McLaughlin’s flag: “Baghdad Jubilant,” “Game Is Over,” “Toppled” and “Joy in Baghdad.”

“Over the years, I’ve become more aware of the symbolism that attached to the flag,” says McLaughlin now. “But for me, it doesn’t have any of those things — and I don’t want it to again.”

When McLaughlin does look back on his flag, he recalls accidentally shooting a civilian — who he can only assume died of his wounds — and, on another occasion, how his hesitation led to the enemy getting off the first shots in an ambush that killed one of his comrades. He lists the names of some of his fallen brothers: Cpl. Evnin, Cpl. Gonzalez and Staff Sgt. May, whose tank fell into the Euphrates River during a sandstorm, killing the entire crew.

For Iraqis, McLaughlin’s flag has another meaning entirely, which Mowaffak al-Rubaie enlightened McLaughlin on last month, when the two were sitting together on a panel about the war at Tufts University. Al-Rubaie, who was the national security adviser for Iraq from 2004 to 2009, and was present at the execution of Saddam, told McLaughlin of the incredible meaning his flag had in his world. He spoke of invasion and occupation, McLaughlin recalled, “all sorts of stuff that affected him personally, his nation, his region. After talking to me, when he finally understood that none of that was intended, he couldn’t process that. He really had a hard time understanding the disconnect between so much meaning versus so little intention ... which was just for one soldier to have a personal memory of war.

“As for Iraq’s future, I only wish the country becomes what they want it to be,” McLaughlin said, before concluding, “so if I can remove one issue from the equation — which has only personal meaning for me, something else for the politicians, and something else for the Iraqis — I’d rather just put it away and let those unintended meanings stay in a seven-second box back in 2003.”

As the late historian Paul Fussell writes in "Wartime: Understanding and Behavior in the Second World War," “In the midst of calmly committed mass murder, reliance on amulets will seem about the most reasonable thing around.”

With Rosenthal’s photo of Iwo Jima, it gave a nation reeling from great sacrifice a reminder of why they were fighting in the first place — a Manichaean triumph of good over evil. The television coverage of Firdos Square — which occurred at what would prove to be the beginning of a long and bloody and stupid conflict — is something quite different, calling to mind the romanticized versions of 19th-century warfare, when the upper classes of imperial nations — perched safely atop nearby hillsides — would watch the battle while wearing evening dress, expectant of the victory balls to follow. If only they truly knew what was happening on the battlefield.

In either case, it’s a lot of significance to place on an inanimate piece of cloth, but it is a practice as old as war itself. Planting a flag is about planting meaning on an endeavor filled with meaningless loss and suffering, on a path that leads from Pearl Harbor to Hiroshima, from 9/11 to Abu Ghraib.