“Duck Dynasty” is a great sitcom 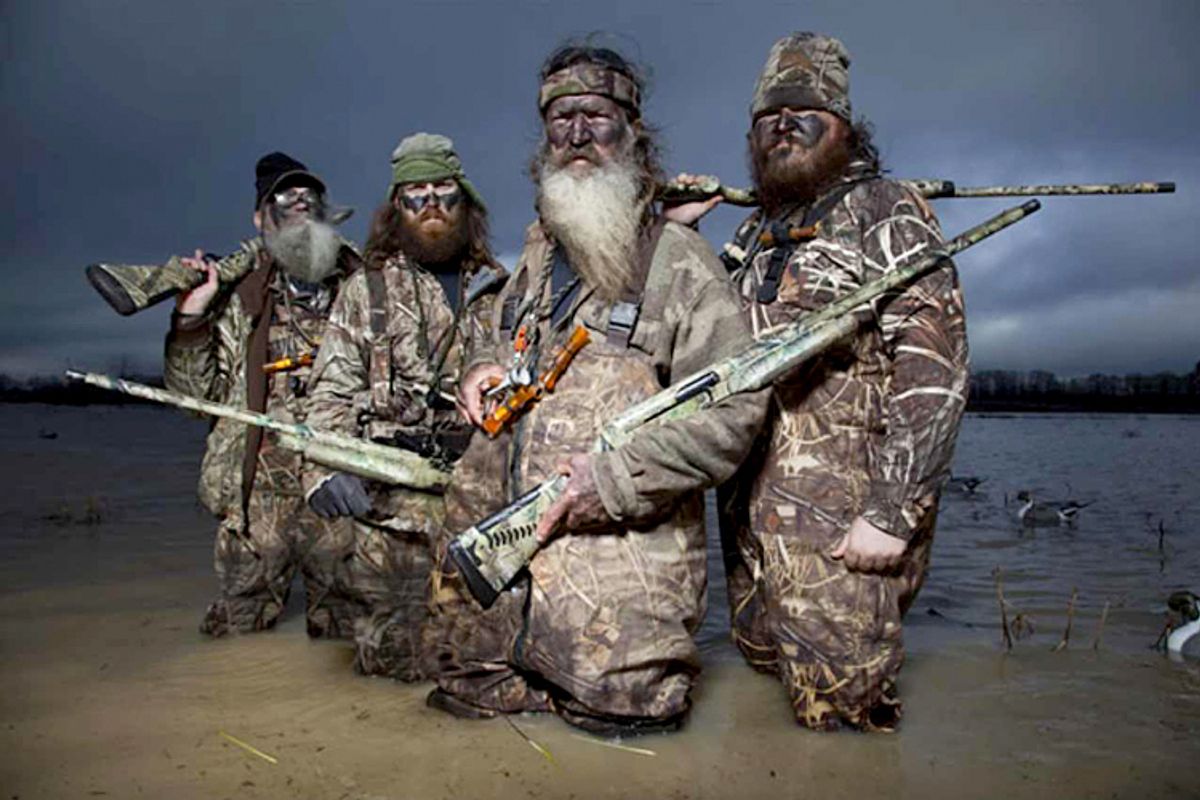 A&E’s reality TV show "Duck Dynasty" is one of the ratings monsters of cable, which means it is one of the ratings monsters of television. Airing Wednesdays at 10, "Duck Dynasty" focuses on the high jinks of the Robertson clan, men who worship at the sartorial altar of ZZ Top and have made a fortune selling duck calls from the wilds of Louisiana. Its third season premiere in February attracted more than 12 million viewers, which would be a great number for any network show and is double and triple the size audience NBC gets for its Thursday sitcoms. It’s the sort of up-is-down piece of ratings data that makes one worry for the future of network TV until one watches “Duck Dynasty” and realizes nothing mysterious or strange is going on: “Duck Dynasty” is just a great sitcom in reality TV trappings.

When “Duck Dynasty” premiered a year and a half and three cycles ago, it appeared to check off a number of reality TV boxes. It was both a subculture and family-oriented series, populated by endearing, energetic characters doing a strange and sometimes action-oriented job. In the pilot, you can see the show that A&E thought it was making — “Deadliest Catch” meets one of the swamp shows with some “Jersey Shore”-ish personal charisma tossed in — but also the show it actually had: “The Farm,” NBC’s failed “Office” spin-off about the weirdo Schrute clan, if the Schrutes were charming and scruffy Southerners.

In that first episode, Willie, the middle son — who had gone off and gotten himself edumacated and returned to grow his father Phil’s duck call business into a million-dollar enterprise — is besieged by his lazy relatives who won’t do their damn jobs. The series is aiming for standard reality TV stakes: A joke is fine, but the goal is actually overturned furniture. In the pilot’s climax, Willie kicks a box, screaming at the employees who have spent the entire episode trying to turn the loading dock into a pond. But in the episode’s last beat, Willie wonders if the pond really worked, and the episode ends with everyone gathered around the water, teasing each other. They tried to be serious, but they couldn’t keep themselves from having fun. This is the "Duck Dynasty" way — everyone is mischievous at heart.

Since then, “Duck Dynasty” has slowly distanced itself from the typical table-throwing of reality TV to embrace sitcom tropes. If you turn on a random episode, the only thing that distinguishes it from a comedy is the film stock and its use of reality TV visual language. The cast members are all high-level riffs on familiar archetypes: Willie plays the straight man even though he, like all Robertson men, has long hair and a beard. The gruff, camo-wearing paterfamilias Phil laments change and society and eschews anything “girly” — except cooking frogs. He also dotes on his wife Kay — Miss Kay to you and everyone else — a mean cook with the secret steel and endless patience of a woman who has spent her life in a family of capital-M men (she has four sons). There’s Jase, Willie’s older brother, who has a bad attitude and a mordant wit, sarcastic and sardonic about nearly everything his little brother does, so the typical endearing smartass. And then there’s Si, a Vietnam vet and master tall-tale teller who revels in saying half-crazy things to the camera. He’s like a less criminal, more cuddly version of “The Office’s” Creed. Rounding out the cast are children and wives — who, like wives in sitcoms, are upright, put-upon, and ultimately clever — and various employees. At the end of every episode, the family, who is very religious, gathers around the dinner table, praying and eating and joking.

In this season’s premiere, the men decide to go camping in honor of the start of duck season, but Willie brings an R.V. instead of a tent. Cue six punch lines from Si and Jase about how soft he is (“Willie’s idea of roughing it is opening the garage door manually,” etc.), before, slowly, all the campers abandon Jase to sleep in Willie’s truck. Another episode has Willie trying to lose weight for a high-school reunion. He ends up in yoga class as his father walks in and using a shake weight in front of his brother. (Shake weights, like the clapper, were only invented to appear in fictions.) It’s not just the premises that read like sitcom outlines, it’s also the banter. Willie’s wife asks him to open a jar, and then tells him that his son just broke up with a girl. Willie groans with unhappiness — it’s about the jar, not the breakup. The guys take the same son out on a hunting trip to make him feel better. “We’re not the chasers we’re the chasees,” Jase tells his nephew, only to have Si scream, “We gotta chase these things!” about some nutria they are hunting.

“Duck Dynasty” is the successful — by which I mean both well-rated and also funny — version of ABC’s “Last Man Standing,” or any of the other even more-failed network sitcoms about the crisis of masculinity. The Robertson men play up their machismo and revel in their beards and guns in a showy way that suggests they know that somewhere these things are under attack — Phil delights in saying things like, “I love animals. They are delicious,” and Jase is constantly talking about how beards are a sign of manhood; in one bit they all measure their beards — but that somewhere seems far away. These guys are not wholly besieged and insecure about their place in the world, and to the extent that they are, they can make good jokes about it.

“Duck Dyansty” proves the truism that characters are funny in their specificity not their generality: How many other millionaire rednecks who look like hippies but hate hippies and are expert frog catchers and hunters who spend their day cracking jokes and making kazoos do you know? Unlike their kin on network sitcoms, the Robertsons are allowed to revel in their guns and their religion, topics that are both non-starters on mainstream television, even though, whatever you think about either, there are certainly many Americans who are into both. There is a large, underserved audience for Christian programming, as the hugely rated “The Bible” miniseries or Mel Gibson's "Passion of the Christ" suggest. “Duck Dynasty” is overtly Christian, while also being much more appealing to the non-religious than the aforementioned entertainments. In one episode, the men aren’t showering, and Phil fancies getting frisky with Miss Kay. She insists he shower. He quotes the Bible to her. She quotes it back: Cleanliness is next to godliness. She wins. He showers. Grandpa gets laid. It’s a kind of perfect “Duck Dynasty” joke: They are always a little naughty.

The Robertsons have a fundamental mistrust of authority that has mellowed into a playful relationship with rules. Their long hair and beards must have once been a middle finger at the man and his boring office life, but times have changed, and not just because by making a fortune, the Robertsons have become the man themselves. (Though this is the central tension between Willie and his whole family: They know he's made them self-sufficient and rich, but they just cannot respect a boss.) The anti-authoritarian, working-class ethos that the Robertsons espouse probably had them as Dixie Democrats if not flat-out populists decades ago. Now, because they love guns and Jesus, their anti-authoritarian, working-class ethos has them complaining about “liberal society,” doing ride-alongs with cops, and scoffing at hippies, even though, to the vast majority of Americans, hippies are exactly what the Robertsons look like.

I suspect that one of the reasons that "Duck Dynasty" has been so successful is that it is actually dog whistling to the men it is aiming for on the right frequency: Not only is it really funny, it’s about a bunch of guys who have not been sanded down for network TV. Because “Duck Dynasty” is a reality show, it’s allowed to be culturally, politically and socially complicated about class and religion and the South in a way network comedies with their mandate to appeal to everyone cannot be. "Duck Dynasty" is a better sitcom for all the freedom being a reality show brings it.