NBC's ridiculous "Ready for Love" is "The Bachelor" with experts 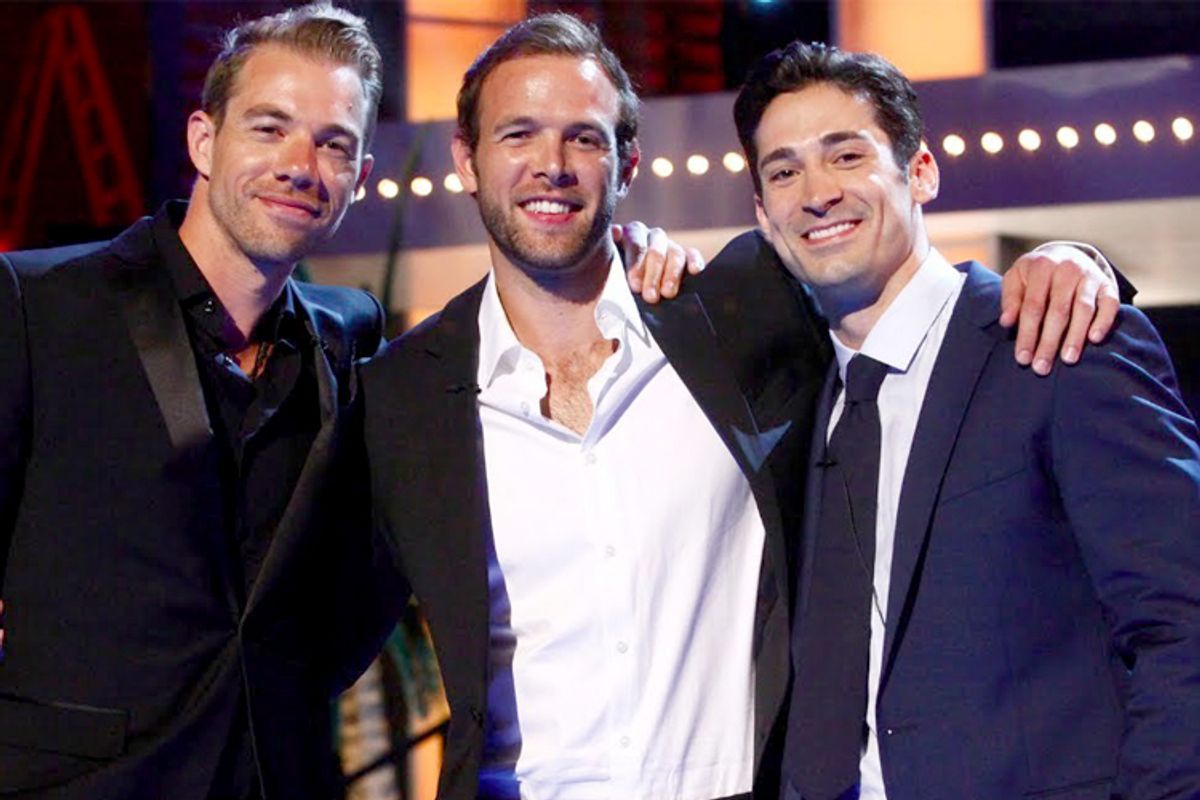 All week, NBC has been promoting its new dating series “Ready for Love” by promising that it will “revolutionize” the genre, part of NBC’s ongoing strategy to denude the word “revolution” of all meaning.  (“Revolution” is also the name of NBC’s fairly popular, totally execrable, not at all revolutionary TV show. Current tag line: “Join the Revolution.” Yes, every single person who has been part of any revolution, anywhere, at any time is rolling over in their grave.) “Ready for Love,” which premiered Tuesday night in a two-hour installment that felt even longer, is not only not a “revolution” of the dating genre, it is not even an evolution or advancement, just a mishmash. Put “The Bachelor,” “Millionaire Matchmaker,” “The Voice,” “The Dating Game,” Giuliana Rancic and a studio audience in a bowl, mash, slash, pound and serve. If you close your eyes, it tastes pretty much like “The Bachelor.”

“Ready for Love” wants to position itself as a dating show particularly dedicated to results. Eva Longoria, an executive producer, gave the series a real talk introduction: She loves dating shows, but “Let’s be honest” they haven’t been that great at matching people. To rectify this situation— to create a dating show that will successfully marry people off —she has dreamed up a series with an enormous amount of complications and meddling that, after all the complications and meddling, is, obviously, going to be just as bad at matching people as any other dating show.

The major difference between “Ready for Love” and “The Bachelor” is that when the women on “The Bachelor” try not to be themselves to appeal to a man, they are being advised by unseen reality TV producers. On “Ready for Love,” they are being advised by professional matchmakers. The “top three matchmakers in the world” — all business blond Amber, dapper Brit Matt, and the curly haired, blowsy Tracy — each select four women for an eligible bachelor. I am sure that there is a Yenta or auntie plying her trade someplace far from the Internet who would take issue with this trio's designation as “the best matchmakers in the world,” but Tracy did write the most viewed article on the Huffington Post ever, so, please, how could you doubt their credentials?

Last night’s episode focused on Tim, the sensitive and well-meaning lead singer of the “rock band” the Plain White Tees. (There are two other men, who will be introduced next week, when this whole involved rigmarole has to go down again.)  In NBC’s ongoing efforts to turn all of its reality shows into something like “The Voice,” Tim had to pick three out of each matchmaker’s four women without seeing their faces, just hearing short introductions. (The introductions were universally mortifying. One woman rapped, another sang opera. )  "Ready for Love” kept insisting that this format —  not seeing the very attractive women before making a rash decision about them — was somehow bold and new, even though it’s the premise of one of the very first dating shows, “The Dating Game.”

Having finally narrowed the women to nine,  “Ready for Love” left the gaudy soundstage — glass elevators, bright lights, the Rancics — for a familiar group date. To prep for the date, the matchmakers advised their picks on how to behave: Amber told her contestants to really focus on “building their brand.” Matt suggested they keep the energy level high and focus on the emotion. Tracy told them to embrace the spirit of play. No one was told to be themselves, because being yourself is for the foolish and lazy: you wouldn’t be yourself on a job interview. Why wouldn't you take dating just as seriously?

Tim is such an earnest, good guy that his idea of a nice way to get to know nine strangers is to force them to hear his easy listening outfit play. (“Ready for Love” is equally dedicated to all of its participants “brands.”) If you think you have seen an awkward forced encounter with music before, please imagine what nine anxious women “enjoying” a song they must enjoy on a reality TV date looks like. The dancing is less terrible than you might predict. Tim then made the women write and perform a new verse to a song he had already written part of. (Chorus: "Baby, I'm so crazy, no one makes me feel the way you do." Tim says music is his therapy. If this is his level of lyrical insight, it is no wonder he has ended up on a reality TV show.) "Ready for Love” did not let the recording studio setup go to waste, making sure that when Leah, a woman who already had a past with Tim, tried to talk with him, all the other women could “somehow” hear it.

After the date, the show returned to the bright lights of the studio set. The three matchmakers and the Rancics and the women sat down for a critique session: Amber had told one of the girls, funny and down-to-earth but really, really easily moved to tears, to make sure to come off as sexy. She had said the word “F-A-R-T” instead. Matt explained to one of his high-energy charges that telling Tim you have a list of "50 things" you’re looking for was unwise. An artsy girl from New Orleans had successfully wooed Tim by playing the piano and making super-intense crazy eyes at him, just as Tracy had advised. Giuliana and Bill tried to force Leah to tell everyone if she’d had sex with Tim and then acted outraged when she would not.

The three matchmakers got to select the “bottom” three women, so rebellion against them and their take on “What not to do” was futile. The “F-A-R-T” girl, despite being pretty charming and Tim seeming to like her, got thrown to the bottom — do not cross Amber — but it was poor Leah, already way too emotionally exposed, who got kicked off. Next week, instead of picking back up with Tim, the series will start from scratch with two brand-new dudes, before picking up again in future weeks with Tim. Ready for love? Or just ready for more?