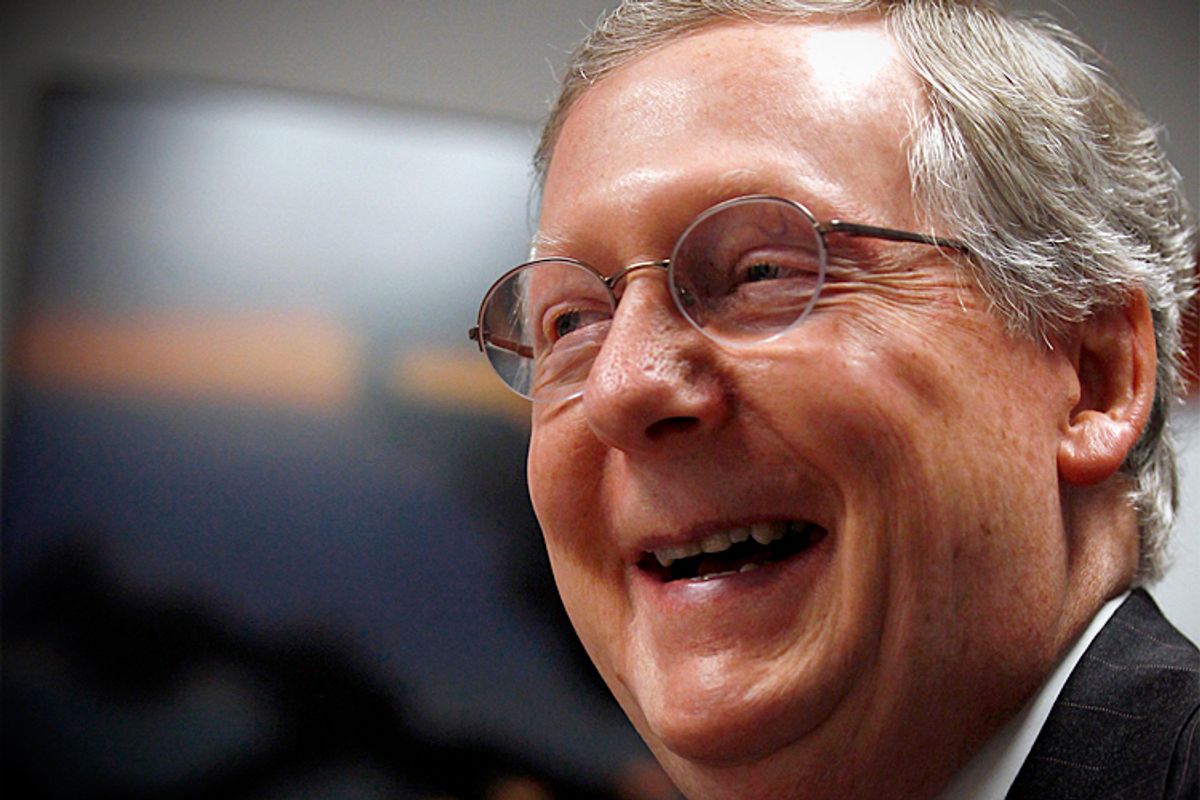 After a recording of an opposition research strategy meeting was leaked to Mother Jones, Mitch McConnell is demanding that the FBI investigate the bugging of his office by the "political left." This is silly. McConnell knows it's silly. The meeting was almost certainly recorded by an attendee, not by "bugs" planted by liberal spies.

But the point isn't really to catch the perpetrator. The point is this ridiculous splash on his campaign website, in which visitors are told that McConnell's office was "wiretapped" by "liberals" and are encouraged to respond by sending all of their contact information, along with some money, to Mitch McConnell's reelection campaign. A good "victim of liberal persecution" story is a ticket to long-term love -- and cash -- in the persecution-fixated conservative movement. That's why Fox hired Juan Williams and why people gave money to Michele Bachmann and Allen West. Mitch McConnell, who is among the least popular humans on the planet, especially in Kentucky, needs to get conservatives excited to support him, and a fantastical tale of wiretapping by leftist thugs will help.

He shouldn't actually need this, though. The weird thing about Mitch McConnell is that he's easily the best friend the conservative movement has in Washington, and yet the activist right-wing base hates him.

No one has done more to thwart Barack Obama than McConnell. But the CPAC rabble reserve their affection for loudmouthed clowns like Louie Gohmert, who has never accomplished anything. McConnell operates quietly, but more effectively than almost any other major conservative elected official in Washington. He is keeping liberal (or, more often, moderate) judges from being confirmed, he's hobbling the Consumer Financial Protection Bureau and effectively stopping the National Labor Relations Board from carrying out its mandate. If Senate Republicans were led by a squishier, more moderate senator, one who actually took seriously the "tradition" and "civility" bullshit the chamber's old men pretend to hold dear, they might not have been willing or able to carry out four straight years of delay and filibuster on every single piece of Senate business. Despite that, McConnell is derided as a squishy moderate. In fact, it's only through McConnell's considerable political skill that he's managed to avoid a serious right-wing primary challenger.

That's why McConnell needs this battle with "the political left." His very bright campaign manager -- Jesse Benton, whom you may know from the Rand Paul and Ron Paul campaigns -- clearly knew that the smart move was to immediately hype the fact that The Liberals are Attacking Mitch McConnell. While Tea Party types distrust McConnell, they loathe all liberals. That's why McConnell kept repeating that the "bugging" of his office was carried out by "the political left," and that's why he broadly attempted to associate that phrase -- though not assign responsibility for the taping -- to the Kentucky liberal group that recently made headlines for a racist attack on McConnell's wife. (A racist attack that much of "the political left" criticized as racist.)

If you want proof that this is working, check out this column by the National Review's Michael Walsh, a man who used to write under a pseudonym as a parody of Hollywood liberalism, and who now writes under his own name as a much funnier and more cutting (if unintentional) parody of hysterical right-wing ranting. Walsh is pleased that Sen. McConnell has recognized the essential truth of modern politics: That the Left is vicious and unrelenting.

Good to see that Senator Mitch McConnell has finally figured out what some of us have been shouting for years: The Left plays to win and they don’t much care how they do it. When they say, “by any means necessary,” they mean it.

As the Mother Jones story ripples through the rest of the compliant, complicit media, the takeaway won’t be the substance of the story, or lack of it. It will be: Those mean Republicans, blah, blah, blah. In other words, it’s not a story in the old journalistic sense. It’s a meme-reinforcer. And that’s how the Democrat-Media Complex plays the game; even a nothing-burger story like this can be used as a club with which to pound the opposition, with the ultimate goal of delegitimizing them completely.

The only people here exploiting the appetite of a portion of the political press for simplistic "memes" are the Mitch McConnell campaign, who know that easily riled-up dopes like Walsh will freak out in a grand style when presented with any excuse to.

Once the FBI has finished its investigation, McConnell should send David Corn a fruit basket.