Here's why dogs rule literature -- but cats run the Web

Why? It's not a question of cuteness. Cats are simply funnier than dogs, while dogs are more eager to please us 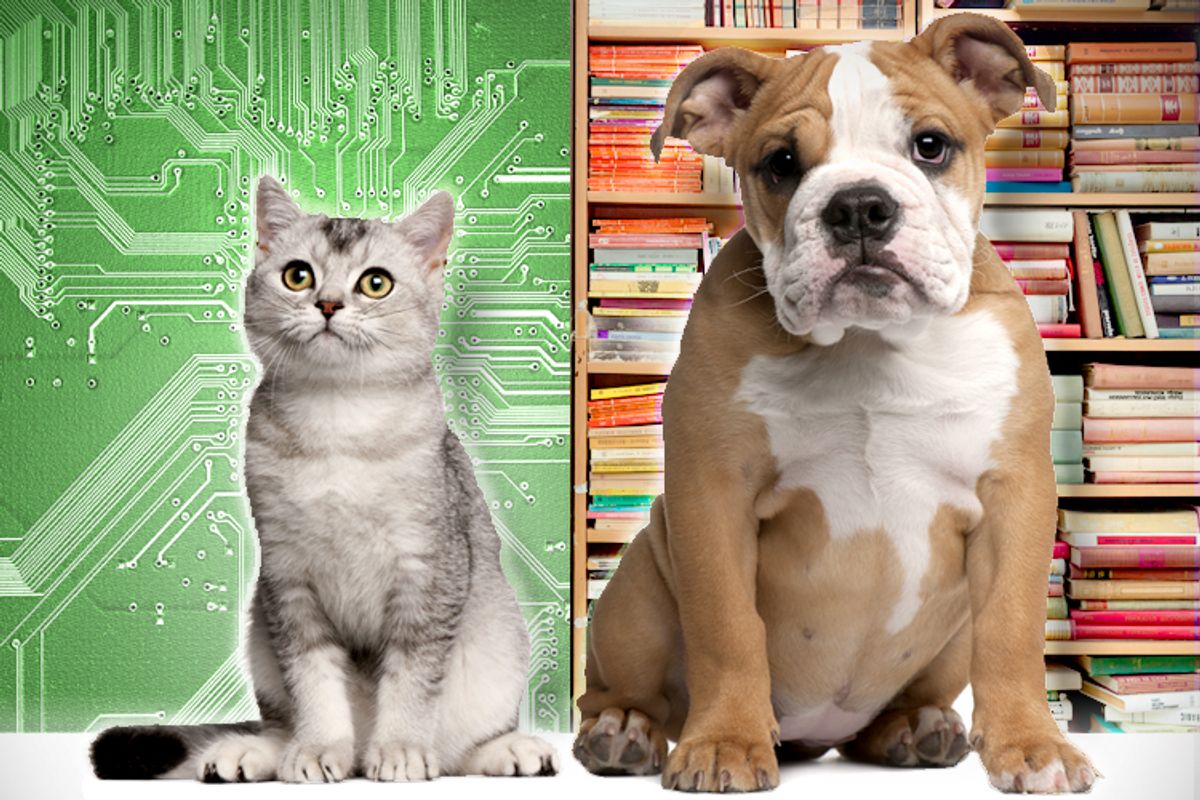 It should come as no surprise that, at any given moment, life's eternal battles -- Country vs. City, Man vs. Woman, Mac vs. PC, and above all, Cats vs. Dogs -- command the attention of multiple thinkers. Still, I was startled last weekend to read Daniel Engber's article for Slate, in which he observes that, while cats rule the Internet, dogs dominate the realm of print books. I had just been pondering the very same point!

Rereading Scott O'Dell's "The Island of the Blue Dolphins" (every bit as great as you remember it being) for a book group, I'd loved the main character's dog, Rontu. Rontu, in turn, reminded me of several other notable literary canines, particularly the intrepid fox terrier, Montmorency, from Jerome K. Jerome's comic classic, "Three Men in a Boat (To Say Nothing of the Dog)." Why, I wondered, are dogs more endearing and amusing in novels while cats claim precedence in Web videos, captioned photos and GIFs?

Showing the superior commitment to science, Engber actually did some heavy lifting on this problem. He tallied up search results from book-based information sources (Google Books, Amazon, Publisher's Marketplace) and the major Web search engines (Google, Bing, Yahoo). A comparison confirmed our shared hypothesis: There are more dogs in books and more cats on the Internet.

Engber kicks around a few ideas about why this should be so, none of which, to my mind, quite hit the mark. Cats, he suggests, are "more an image than a text," creatures whose beauty we observe, but who go their separate ways or spend a lot of time just sitting around, while dogs are active and engaged, more likely to leave the house. This doesn't entirely jibe with my knowledge of cat-human relationships, which can be complex, and it also discounts the many, many novels that take place primarily in domestic settings. Not every story requires hitting the road, fellas.

Full disclosure: I am neither a cat person nor a dog person. My family owned both during my childhood, but I haven't kept a pet of any kind since I left home. I like both species just about equally, and I frequently care for my friends' cats and dogs when they travel. (I've also baby-sat a turtle and some rabbits, so I feel I have a broad basis for comparison.) I'm as impartial an observer as you people are likely to get on this question, so listen up.

First of all, let's establish an important premise: Cuteness is beside the point. Kittens are no cuter than puppies, who are no more adorable than kittens. Eliminate the vast number of Internet photos and videos whose sole purpose is to make you say, "Awwww," and you'll arrive at the kernel of cat dominance online: Cats are funnier than dogs. This is no knock on dogs, who are humble creatures, painfully eager to please and by all appearances perpetually embarrassed. Cats, on the other hand, usually strike us as dignified, confident and preternaturally self-possessed, which is why it's funnier when they make fools of themselves by bungling daring jumps, trying to squeeze into ridiculously small spaces or simply by making funny faces.

The domain of Web videos is for the most part a slapstick, vaudeville world, and there's a reason why Groucho Marx teases a rich, pompous dowager like Margaret Dumont instead of somebody's sweet, unassuming, gray-haired mother. It's funny to see the hoity-toity discomfited or brought low; picking on the underdog (sorry about that) is merely cruel. Even in a more sophisticated or satirical production, such as the celebrated "Henri the Cat" videos, the joke hinges on mocking the similarities between a bored, snooty cat and the pretentious characters of French art cinema. (There is, incidentally, one genre of genuinely hilarious canine video: the kind in which a poor mutt is confronted by his or her master with evidence of misdeeds, such as eating the cat treats, and the dog gives an Oscar-winning performance of utter remorse and shame. It's the extravagance of the pup's misery and self-abasement over such a trivial offense that makes these so funny.)

The humor of cats is a humor of appearances -- the ridiculously sinister or sneering or fatuous expressions they assume, their pratfalls and interludes of bizarre obsessive antics. That's best conveyed in pictures. The humor of dogs is the gentler humor of character, a fond recognition of their universal and quintessential doggishness, as when, in "The Island of the Blue Dolphins," an alert but puzzled Rontu tilts his head to the side at the sight of a cloud of black ink where an octopus once floated. That sort of thing comes across better in stories. You don't need to actually see Rontu do this because you've already seen some other, well-beloved dog do it, and that is the secret of its charm.

Unlike the cats of the Internet, the cats of literature are every bit as cunning, competent and surefooted as the average cat seems to be. Puss in Boots exalts his bumpkin master; the Cheshire Cat grins knowingly and talks in riddles; the Cat in the Hat makes a frightful mess but whisks every trace of it away before Mom gets home. T.S. Eliot's McCavity has "broken every human law/he breaks the law of gravity," and gets away with it. Literary dogs, like Montmorency, tend to play the fool or, like Sounder, the loyal best friend. Cats are more incidental: troublemakers or guides or sneaky villains, who pop in and out of the action at key moments.

But, with all due respect to Mr. Engber, the real reason dogs figure so much more prominently than cats in novels is not especially subtle or mysterious. The reason is narcissism -- not the narcissism of dogs or cats, but the narcissism of human beings. The vast majority of novels are about people, after all, and dogs have always been delighted to play second fiddle to us. They are the ultimate sidekicks, the Sancho Panza of species. Dorothy has her Toto, Tintin has his Snowy, and Old Yeller pretty much lives (and dies) to save the Coates family. That's just not how cats roll.

As far as cats are concerned, if there's a story going on, it can only be about them. The favorite cat novel of my childhood, "Carbonel: The King of the Cats" by Barbara Sleigh, concerns a little girl named Rosemary who discovers that her new pet is a "Prince of the Royal Blood" who has been deposed by a scheming rival. Rosemary and a friend devote themselves to helping Carbonel reclaim his rightful throne. Now there's a cat's idea of a good plot: People dropping whatever they're doing to prove that he's king. No wonder we love making fun of them. We have to strike back the only way we can.