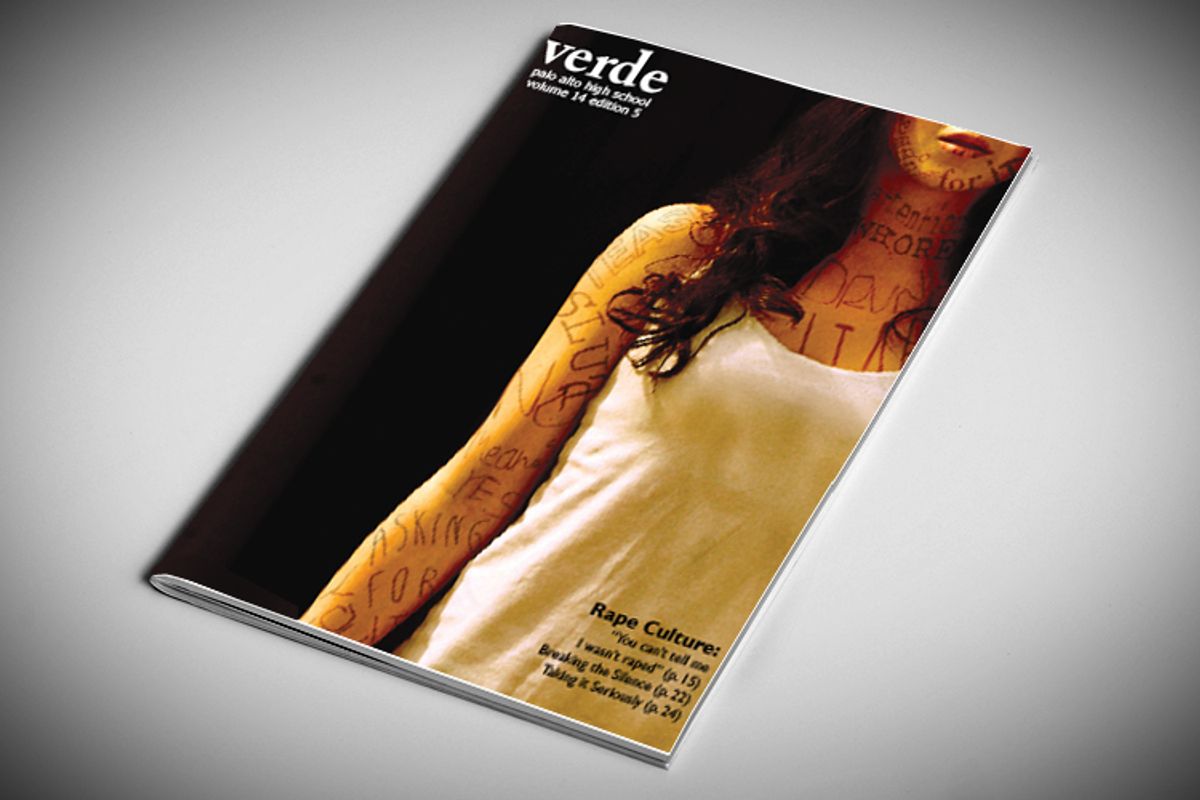 Thank you, Palo Alto High School. This is how it's done. We have had endless, frequently exasperating conversations of late about the harrowing culture of rape. We've dissected a climate in which college authorities are routinely, callously dismissive of students who claim sexual assault. We've watched as mainstream outlets like CNN and ABC News have expressed sympathy not for victims but convicted sex offenders. We've seen social commenters laughed off and criticized for merely suggesting we should talk to our boys about consent and sexual assault. And in the midst of it all, we've seen, again and again and again, girls being brutalized and bullied and blamed and ultimately sacrificed and boys left without direction or guidance.

In a bold and powerful series in the April 9 issue of Verde magazine, the students of Palo Alto High have made a dialogue for and by teenagers about the state of rape culture and contemporary adolescence – and they've given a lesson to parents and educators alike. It's a fascinating work, and a model for exactly what far more high schools and colleges across the country should be doing right now. Confront the problem. Examine it. Talk about it.

The "Rape Culture" issue isn't easy to look at. Its cover is an image of a young girl, her face obscured but her arms and neck and lower face covered in slurs. "Attention whore." "Drunk." "Asking for it." Inside, student Lisie Sabbag writes about a senior's sexual assault. "Despite her earlier protests," the girl was "too drunk to object," she writes. After filing a police report, she became the object of  a "barrage of Facebook messages and Tumblr posts telling her that she was just looking for attention." Sabbag also talks to another student who reveals a community in which boys are pressured to take advantage. "They would say, 'Oh you didn’t want to have sex with her because she’s drunk? You're such a fag.'" And she reveals that in a survey of the school's students, over 25 percent agree that "If a woman willingly gets drunk and then gets raped, she is responsible for what happened to her." Savannah Cordova, meanwhile, writes of listening to Spirit Week cheers that "blatantly bully and slut-shame" girls. "Stop trivializing rape," she writes. "Stop making excuses."

It's tough, insightful stuff – and a cut far, far above the vast majority of revolting, blame-packed commentary in the 24-hour news cycle of crap out there of late. But what makes the Verde package truly exemplary is it welcomes boys into the conversation. Will Queen rebuts the notion that "all men are thoughtless beasts who are unable to control themselves" and tries to make the subject of rape "less awkward and shameful ... something that can be discussed constructively." And there's a revealing conversation with "Paly guys," who admit sentiments like "Certain women are more likely to be raped due to their flirting, teasing, or promiscuous behavior" and "If you dress and act in a promiscuous manner, don’t say you didn’t at least see it coming."

We need to talk about rape. We need to talk to both girls and boys about rape. We desperately need to encourage them to talk to us. We adults need to not be squeamish about taboo topics, and treat students with enough respect to give them space to write and discuss difficult issues – it's commendable that the Verde issue was a collaboration with numerous outside sources and "supported by school leaders." "Our goal … is not to point fingers," the editors write in their introduction to the issue, "but to generate productive discussion about rape as an issue." It's a discussion that should be happening more often. And one we all can learn from.