In a gun debate dominated by men, one person finally transcended it by speaking directly to black mothers 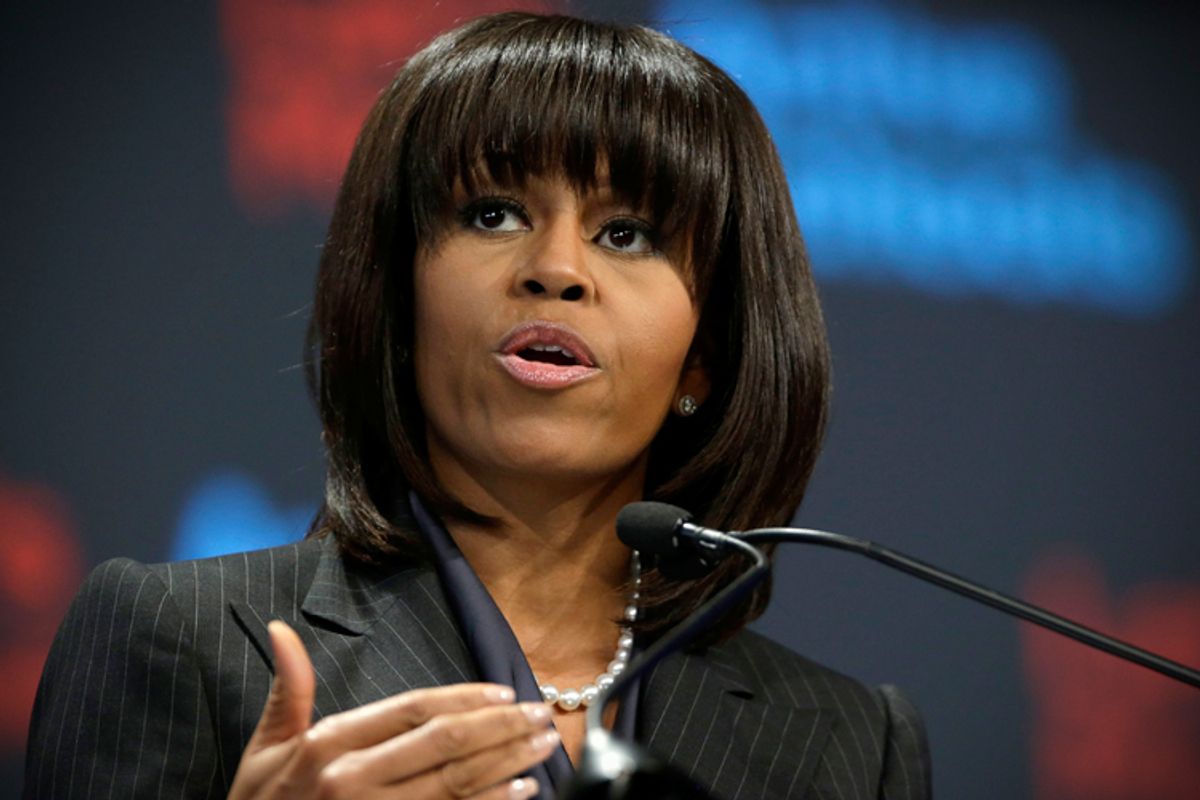 Much has been made of the prominence of men like President Obama, Michael Bloomberg and Wayne LaPierre in the nation's current debate on gun safety reform. But less attention has been placed on the singular and transformational role of Michelle Obama.

The first lady elevated the conversation Wednesday, during a rare return to her hometown of Chicago. In a city ravaged by violence, with more than 500 gun-related homicides last year alone, she spoke eloquently -- and apolitically -- transcending the partisan politics that seem to subvert her husband's efforts for reasonable gun control legislation.

But what was most unique was for whom, and to whom, Michelle spoke. Her words gave voice to an oft ignored (but disproportionately affected) victim of America's gun violence: the black mother.

The first lady spoke of Hadiya Pendleton, the slain 15-year-old student, gunned down just blocks from the Obama's Chicago home -- and only days after Pendleton had attended the president's second inauguration. With tears in her eyes, Michelle said, "Hadiya Pendleton was me and I was her." The first lady went on to add that Pendleton's family is "just like" her own.

It was a display of empathy rarely seen from one so seemingly privileged. Yet for Michelle Obama it was the most natural thing to say. This is a daughter of the South Side -- fully aware of her place in the world. Her tears appeared all the more heavy, because she could easily imagine Sasha and Malia walking down the same streets that Hadiya did.

And herein lies the real power of America having its first African-American president and first lady: They are us

When Trayvon Martin was killed last year President Obama was reticent to address it. The nation quickly became polarized as early reports of the circumstances surrounding the teenager's death suggested an all-too-common narrative of young black boys being suspected of crime -- assumed guilty, before proven innocent. Yet this was different. A boy holding Skittles and iced tea being met with a fatal bullet wound to the chest resonated across racial lines. The president, speaking in the Rose Garden, sent an empathetic message to the parents saying, "If I had a son, he'd look like Trayvon."

It was a simple truth, that held so much meaning.

For many African-Americans, the comment expressed a rare solidarity that Obama (despite his mixed heritage and desire to transcend race -- as president of all) fully identified with them. As could be suspected, the president's foes exploited the moment. Conservative talk radio's Rush Limbaugh attacked Obama for inciting racial animus, and then-GOP presidential hopeful Newt Gingrich ignorantly questioned if Obama would care less if the boy were "a white." America's long history of ignoring, demeaning and marginalizing the lives of black men, women and children -- were lost on the president's critics.

The circumstances surrounding Martin's death focused more on the peculiar stand-your-ground laws, police negligence and old racial codes. Though stricter gun control should have also been central to the debate, particularly since George Zimmerman's past criminal record had not prevented him from legally possessing a firearm, the debate never happened.

The massacre has challenged the national consciousness, in part, because of the sheer optics: A presumably safe suburban town, innocent kids slaughtered -- and all but one of those children were white. Perhaps race shouldn't matter. But it does.

Anna Marquez-Greene was the only non-white child murdered in Newtown, yet her tender face resembles that of far too many black and brown children killed in America's urban centers. Chicago's gun violence seems to have been almost deliberately placed at the foot of the president, and perhaps that is serendipitous, as it has forced a broader conversation about what occurs every day in Newark, Baltimore, Detroit, Los Angeles and New York.

The assault weapons used at Sandy Hook -- and the physical damage Adam Lanza wreaked -- is hardly ever part of the urban experience. But the death toll for brown children is infinitely more. This is where Michelle's words meet the souls of black folks.

The nation has cavalierly turned a blind eye as innocent African-American boys and girls were buried, one after the other. And life imitates art. Toni Morrison invokes these sentiments in the "The Bluest Eye," saying of the sad demise of a black female child, "we acquiesce and say the victim had no right to live. We are wrong, of course. But it doesn't matter. It's too late. At least in my town, among the sunflowers and garbage of my town, it's much, much, much too late."

It is that kind of urgency which first lady Michelle Obama appears to have conveyed Wednesday -- seeking to bring attention to the senseless violence in her town. Hopefully, it is not too late.