Obama's entitlement plan was four years in the making

President’s desire to cut Social Security was public before he even took office. Why did so many turn a blind eye? 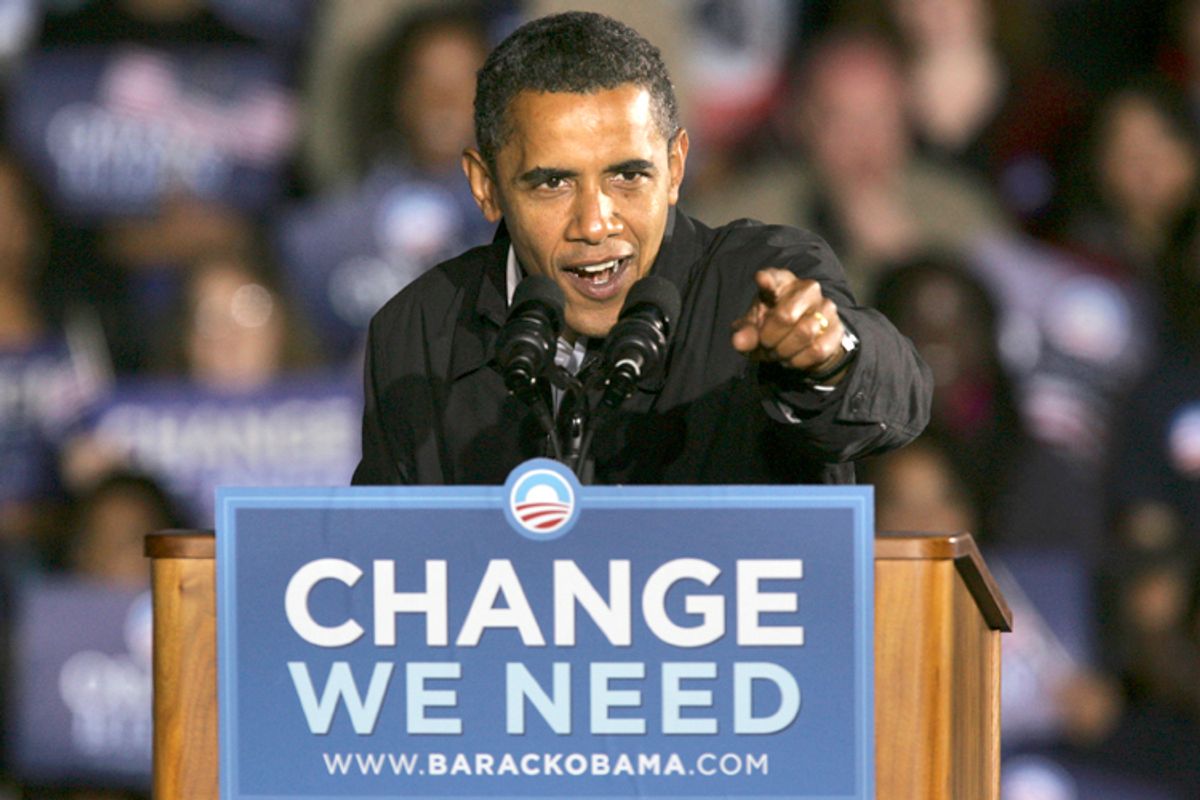 Barack Obama speaks at a rally the night before election day, in Manassas, Va. on Monday, Nov. 3, 2008. (AP/Jacquelyn Martin)
--

While many Democrats are expressing shock and outrage that President Obama, a Democrat, would propose to cut Social Security, Medicare and Medicaid, the truth is they shouldn’t be surprised. Obama’s desire to make these cuts dates back at least four years – since before his presidency, even -- and has been largely in plain view. We just chose to willfully ignore it, and pretend it wasn’t true.

Obama didn’t talk about it when he first campaigned for the job -- if he had, he surely wouldn’t have won the Democratic nomination, and may not even have beaten John McCain, since not even Republican presidential candidates publicly campaign to weaken what their party calls “entitlements.” Everyone sensibly had assumed that no Democrat would want to weaken or reduce the crowning achievements of Democratic Presidents Franklin Roosevelt and Lyndon Johnson, not to mention of the Democratic Party itself. But immediately after getting elected, Barack Obama admitted he wanted to do just that.

Just four days before his inauguration in January 2009, a Washington Post headline blared, “Obama Pledges Entitlement Reform,” and detailed “a wide-ranging 70 minute interview with Washington Post reporters and editors,” in which the president-elect endorsed efforts by congressional Republicans, and “the Blue Dog Coalition of fiscally conservative Democrats,” to cut Social Security and Medicare. A small group of progressives were disturbed at what their friends in Congress were leaking to them about Obama’s commitment to doing this, and a few blog posts were issued to ring alarm bells publicly about it.

To Obama, his plan to cut Social Security, Medicare and Medicaid, while funding the Wall Street bailout, was an act of political courage. (In his interview with the Washington Post, he “pledged to expend political capital on the issue.”) It was his long-term plan, even though the polls showed widespread opposition to it. This was a matter not of expediency, but of conscience, for him: He needed to find some way to fund both the ongoing Wall Street bailouts, and the massive federal debt that would be caused by the 2008 Wall Street crash and its resulting plunge in federal tax collections. This “balanced approach,” of tax hikes and spending cuts, would be his solution to both problems.

Conspicuously missing from the list of names that the incoming president mentioned to the Washington Post as being among the individuals with whom he was discussing his planned changes to Social Security and Medicare were the Democratic leader in the Senate, Harry Reid, and the Democratic leader in the House, Nancy Pelosi. Both were already strongly on the public record as opposing any cuts to Social Security, Medicare or Medicaid, as being appropriate ways to address the nation’s fiscal problems that had been caused by the Wall Street crash.

Often during the subsequent years, Obama drove both Pelosi and Reid to fits with his back-door efforts to cut “entitlements,” such as when, in 2010, he appointed the conservative Democrat Erskine Bowles to serve opposite the conservative Republican Alan Simpson as the two co-chairs on the White House’s “bipartisan” federal debt commission concerning entitlement “reform.” (The commission heads produced recommendations that congressional Democrats roundly repudiated for slashing entitlements, and that Republicans condemned for increasing taxes.) Bowles was supported by the Wall Street mega-banks that were being bailed out by taxpayers. Simpson was a born conservative who followed in his father’s footsteps as Wyoming’s Republican U.S. senator.

Republicans would oppose the commission’s mandate because it called for increasing taxes. Thus, on the very same day that the Bowles-Simpson recommendations were finally dashed in the House, the Republican body instead passed the Paul Ryan budget, which called for draconian cuts and no additional tax revenues. Mitt Romney would run on that platform against Obama, framing the 2012 presidential showdown as a severe cutter of social insurance versus a less severe one. The contrast helped obscure Obama’s record and intentions.

Still, the president often publicly referred to a “balanced approach” and “shared sacrifice.” At a press conference in July 2011, he suggested that, “If you’re a senior citizen, and a modification potentially costs you a hundred or two hundred bucks a year or more,” then you should accept this cut, because “Congress has run up the credit card” paying the mega-banks in the Wall Street bailout and to make up for the economic collapse from the 2008 Wall Street crash.

“The least I can do is to say that people who are making a million dollars or more” (some after their firms were rescued by the bailout) will “have to do something as well,” the explanation continued. “And that’s the kind of tradeoff, that’s the kind of balanced approach and shared sacrifice that I think most Americans agree needs to happen.” However, in the nearly two years after Obama talked about cutting Social Security benefits by “a hundred or two hundred bucks a year or more,” the actual size of that proposed cut has increased significantly in his 2013 proposal.

A week later, the Washington Post reported, "Debt Talks Bring Tensions Between Democrats, Obama to Surface," noting that even top Democrats in the Senate – Reid, John Kerry, Maria Cantwell, Barbara Mikulski, Frank Lautenberg and Dianne Feinstein – were shocked that the Democratic President was leaving them entirely out of the loop in his budget negotiations, and was negotiating only with leading Republicans:

“Often kept in check out of loyalty for their president, congressional Democrats have grown increasingly suspicious of Obama’s motives over the past year. ... They questioned whether Obama shared their core values. ... The Democrats were winning, the senators said. The American people were with them on tax increases for the rich. ... Why give up now? ... Democrats lashed out, saying that deep cuts to federal agency budgets and entitlements were too steep a price to pay. ... In the House, rank-and-file Democrats said the situation had grown dire. ... [As one of them put it, he feared] ‘a deal that basically gives them [Republicans] everything they want but yet still takes away from those who are our most vulnerable.’”

Fast-forward to this month, and the offer to reduce benefits through chained CPI is remarkably consistent with the goals the president has expressed since before he took office. In fact, the persistence over four-plus years with which the president has pursued this plan illustrates that his current proposal is not merely the result of a reluctant, leverage-free negotiator. It’s a plan he wants to enact.