CBS wants us to believe it is about magnolias and grand traditions. The real history is one of racism and exclusion 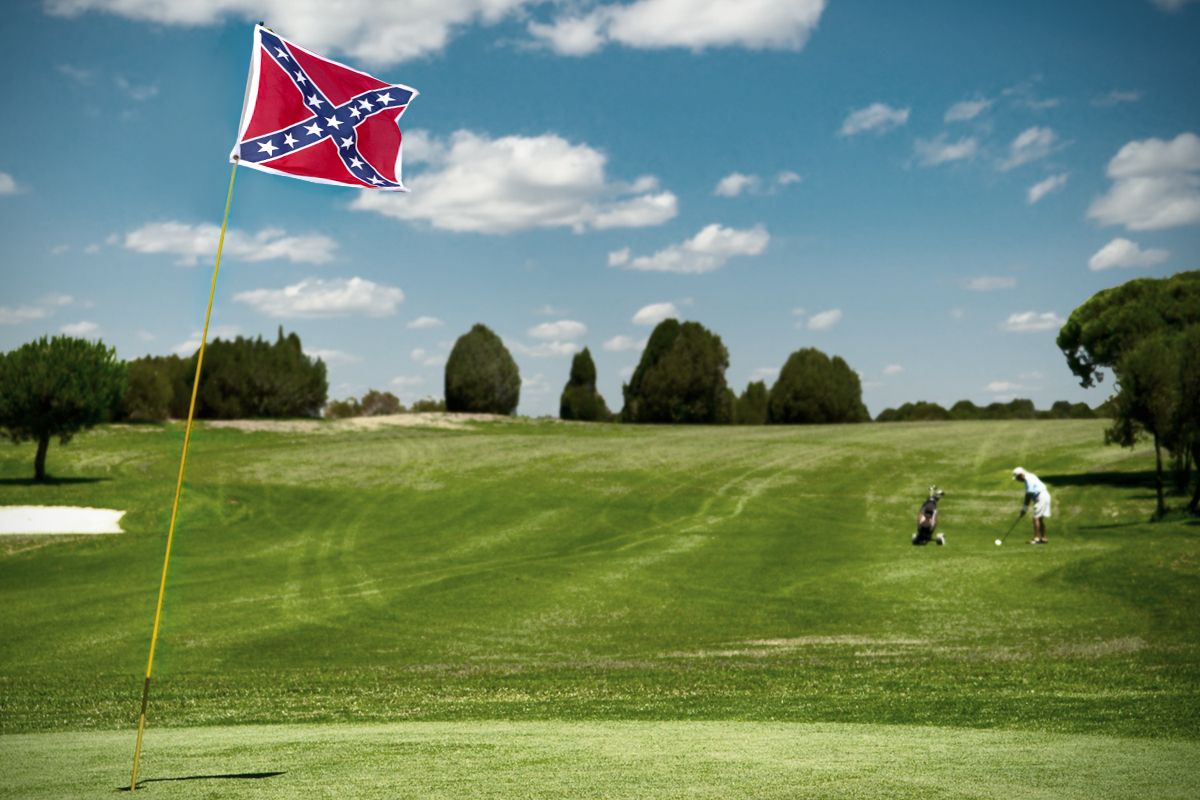 The last two Democrats in the White House have been avid golfers. A once lily-white sport has never felt more international. But it is still easy to dismiss golf as elitist and reactionary. And the problem comes into particular sharp focus early every April, during the Masters, a tournament at a small private country club in the largely working-class mill town of Augusta, Ga. The tournament gets underway today.

Those of us who love the game know that it is not as elitist, classist, racist or sexist as many seem to think -- but this particular tournament played at this particular club most certainly is.

“A tradition unlike any other” goes the tiresome CBS tag line for the club’s annual invitational. But it is a tradition of privilege and exclusion.

The vaunted prestige of the Masters began with Robert Tyre Jones Jr., one of the club’s founders. After Babe Ruth, Bobby Jones was the brightest light in the Golden Age of American Sports. Handsome, humble and invariably good-humored, he has always stood as a kind of secular saint in the popular imagination. When the British golf writer Bernard Darwin (grandson of the naturalist) said that “humanly speaking” Jones’ poetic golf swing left “no room for improvement,” he was speaking both literally and figuratively. The grace of the swing revealed the graciousness of the man.

His boyish good looks aside, what fans and sportswriters have always most loved about Jones was his insistence on remaining an amateur throughout a brief but brilliant career in which he would win a total of 13 “majors,” including four in one calendar year, a feat that has never been duplicated. Other golfers may have hustled after filthy lucre, but not Bobby. Bobby was pure, uncorrupted, a man of impeccable integrity, of true sensibility, who played a dignified game for the noblest of reasons – for honor.

Implicit in these tributes is the understanding that Jones, a well-to-do Georgian, was a holdover of grand and courteous Southern traditions: the South’s last true gentleman. From the time he began competing for national titles at age 14 until his death at 69, Jones attracted scores of men eager to zealously guard and promote his reputation – “Doing for Bobby,” they called it. It was all right if they were seen as bigots and bullies, so long as nobody ever thought ill of Bobby.

Yet there’s just no getting around it: Jones presided over a racist golf club. The financial legerdemain is complicated and ultimately incidental, the bigotry is not.

Prestige and dignity are the themes struck in every telecast, with a tinkling piano accompanying a montage of magnolias, azaleas and dogwoods and the antebellum plantation clubhouse. Oddly, though, in the voluminous literature of the American South, the Augusta National Golf Club and the Masters are almost never discussed. Perhaps that stands to reason. It is, after all, a private club with only a few hundred members, most of them living in other parts of the country. But the Masters wouldn’t have the highest Nielsen ratings of golf’s four “majors” if the event wasn’t saying something meaningful, something reassuring, to millions of Americans about privilege and class prerogatives in American life. Never mind all the bigotry and ugliness you’ve read in history books. Put aside whatever images of the South that you may have gleaned from Lynyrd Skynyrd, NASCAR and "The Dukes of Hazzard." This, we are assured, is what the South is all about – a place of propriety, tradition and fellowship, holding fast to vanishing aristocratic graces.

Except for tournament programs and a haphazard official club history written by Roberts (who, in 1977, killed himself on the course, a .38 to the head), Augusta National has been extremely guarded about its history. Any member who talks publicly about the club risks being expelled. With rare exceptions, the sporting press has been content to grovel and glorify the club and its tournament. "A gift for all of us to enjoy," the Golf Channel's Rich Lerner twaddled this week. To Charlie Sifford, however, the whole production has always been a crock. “Can somebody explain to me,” he once asked, “how the Masters golf tournament in Augusta, Georgia, became such a revered sporting event?”

An excellent question. A championship of nothing with a limited field stocked with aging past winners who have zero chance of winning, the Masters is nevertheless the one tournament most American golfers would most like to win. Simply getting invited to play can seem the validation of a journeyman’s career. It is a manufactured prestige, though, artfully insinuated into the natural history of the game. Scotsmen had been playing golf for over 500 years – since before Columbus was born – and Americans had already been playing high-level tournament golf for over 50 years when, in 1932, Jones and Roberts quietly tapped their wealthy friends to buy a 365-acre indigo plantation on the outskirts of Augusta for a mere $70,000.

(As if to make up for lost time, Jones and course designer Dr. Alister Mackenzie managed to have the 18 holes built in 76 days. It helped that the work was done during the depths of the Depression, when labor was cheap. They paid their black laborers 10 cents an hour, working them 10 hours a day, six days a week. “With that foreman standing over you, it was like slavery again,” one worker recalled. Unless they later took a job as caddy, cook or clubhouse servant, most of those men would never see the grounds again.)

The private country club is a decidedly American institution. Unlike Scottish courses, which are unpretentiously open to the public to golfers and non-golfers alike (anyone can take a walk on St. Andrews, any day of the week), the exclusive American country club was contrived to give an air of English aristocracy. The elitism of the game itself is often overstated, however. When the Augusta National opened, the United States had nearly 5,000 country clubs, plus thousands of public and municipal courses. Jones aside, nearly all of the best professional golfers have been sons of the working and middle class. Until the 1960s, when television coverage increased the gate receipts and image-conscious sponsors raised tournament prize money, the professional golfer’s itinerant life (and status) was not much different than a professional wrestler’s.

Augusta National would set a different tone, Jones promised. For one thing, it wouldn’t cater to mere local swells. “Our aim is to develop a golf course and a retreat of such stature, and of such excellence, that men of some means … might find the club worthwhile as an extra luxury where they might visit and play with kindred spirits from other parts of the nation,” Jones would write. For another, his annual invitational wouldn’t degenerate into a tawdry professional event. Crass commercialism would be shunned. A pretense of leisurely informality would give the gathering an aristocratic yet unceremonious air. Or so they hoped. In fact, the tournament soon became a frivolous affair, featuring downtown parades, beauty pageants, trick-shot contests, gambling, and the yearly treat offered to club members of a battle royal, in which a half-dozen young black men were paraded into a boxing ring and told to slug it out, blindfolded, until only one was left standing (James Brown, the future soul singer and an Augusta native, was one such youth; not surprisingly, he enjoyed the mayhem).

Although Jones was a good friend of the virulently racist and fellow Georgian Ty Cobb and of Cliff Roberts (who didn’t hesitate to unburden himself on the subject of integration. “It means mixed marriages,” he said. “The mixed are the worst … the most worthless of all in every respect”), Augusta National members and staff expressed immense affection for the man, a gentleman through and through. Yet this conceit of the gentleman has always been problematic. Well-to-do white Southerners have understandably been especially enamored of a concept that could transform moral failings into transcendent virtues. In the world of sports, the “amateur ideal” signified the gentleman’s innate social superiority. What the gentleman amateur forsakes in prize money, he more than makes up for in prestige, validating his advantages over others without bringing undue attention to the far-reaching social consequences of that malignant power.

Applied to Jones, the words seem a cruel slander against an eminently decent fellow merely presiding over a popular golf tournament played over an idyllic landscape by well-behaved men. Problem is, the Masters has as its background – indeed, as the basis of its prestige – the history of white people enjoying advantages over black people. Far from denying the fact, the club, the tournament and CBS have found a way to profit from those ugly legacies through the symbolic evocation of the paternalistic plantation South. Remove the lyrical evocations of magnolias and mockingbirds or incorporate into the television coverage discrepant images of a nearby Jiffy Lube and Piggly Wiggly, and the Masters immediately becomes just another tournament, no more prestigious than, say, the Shell Houston Open.

How they managed that cultural sleight-of-hand mystified Charlie Sifford and other minority golfers. “To my mind, the Masters was the worst redneck tournament in the country, run by people who openly discriminated against blacks,” he wrote. “But somehow [the club] got away with it.”

Chances are, Jones knew exactly what he and Roberts were getting away with. “We live in an idiotic society,” Jones wrote his friend toward the end of his life. “Frankly, if I knew any more profitable ways of taking advantage of the idiots, I would exploit them. This is no time for idealism.”

But if Jones didn’t fully appreciate what was going on at the Augusta National, Sifford knew the score. “All I wanted was a chance to play,” he said. “Them motherfuckers kept me out.”

That was in 1996. A year later, Tiger Woods essentially took over the Masters, winning the first of his 14 major championships by a tournament record 12 strokes. I was glued to the television that weekend, as I have been ever since, despite my qualms. Perhaps I should not watch the tournament on television. But our guilty pleasures are usually the best kind, and watching the Masters is mine. I can rationalize my indulgence by noting that the club and tournament have come a long ways since the days of Battle Royals, Roberts telling racist jokes, and broadcasters providing blackface commentary from the 18th green. Why, Condoleezza Rice is now a member!

But in truth I know that the legacies of Southern bigotry haven’t so much been elided as they’ve been artfully revised, lyrically evoked and profitably celebrated. And still I watch. Most of us who watch golf also play the game ourselves – after a certain age, that’s not the case with baseball, basketball, football or synchronized swimming. We watch to learn, to study how the pros maintain their concentration as they navigate apparent and hidden hazards. Although its stately manicured grounds seem gentle and benign, Augusta National is full of those hazards – moral, historical and otherwise.

A former newspaper reporter, Thomas Hackett is a freelance magazine writer who lives in New York.