The much improved "Veep" 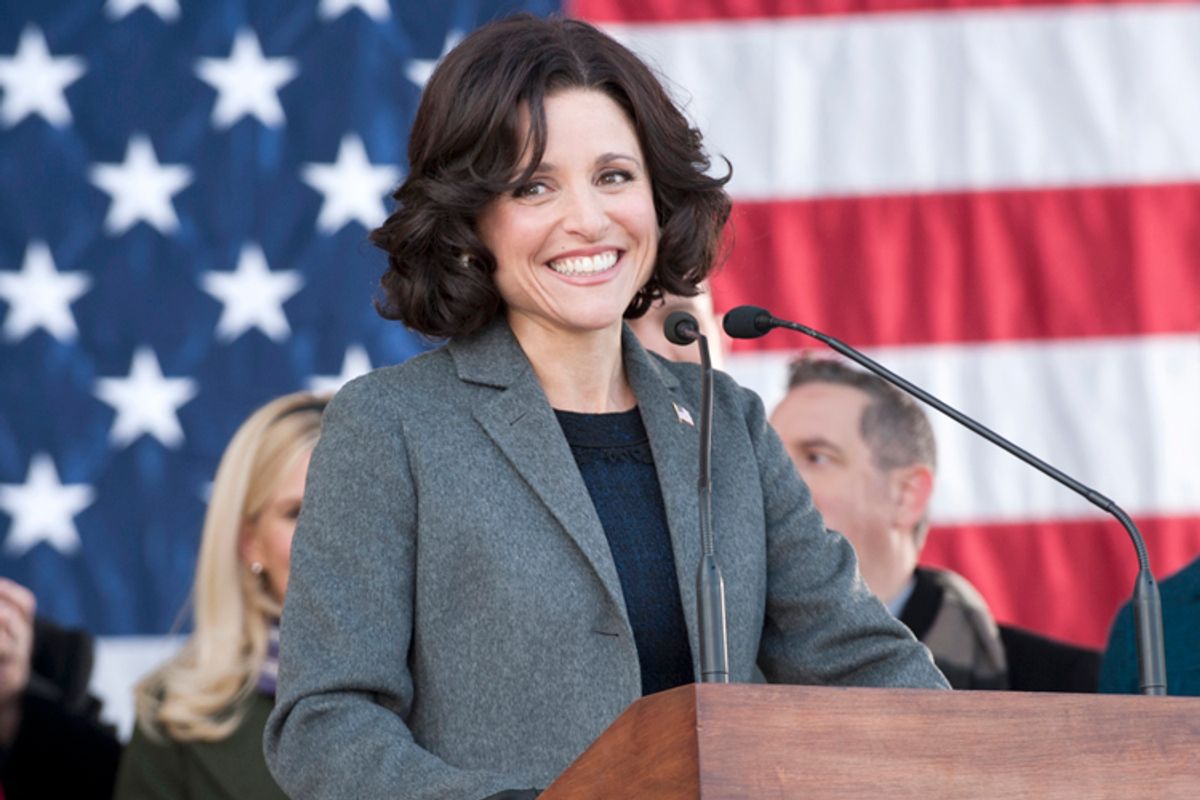 “Veep,” HBO’s satire of American governance, returns on Sunday night for a much-improved second season, as sharp and scabrous as the bureaucracy it mocks is incompetent and beleaguered. Set in the office of Vice President Selina Meyer (Julia Louis-Dreyfus), the big joke of “Veep’s” first season was the terrible tease of being second in command, a gig that, until Dick Cheney used it to ruin the world, was widely known to be a front row seat to your own powerlessness. All last season, Selena would ask her staff,  “Did the president call?” He never had.  In the new season, on the strength of a whole .9 percent statistically relevant influence over voters, the “thick rubber condom” between Meyer and the president has been removed, granting her “unprotected access” to power, and “Veep” a whole new range of jokes.

Selena’s new authority resolves the major problem with “Veep’s” first season, a kind of British-to-American translation issue. “Veep’s” creator, Armando Iannucci, had previously made the political satire “The Thick of It,” which is tonally and stylistically similar to “Veep” — curse words flying in a world where endless shit storms keep pols from important work — but was set in the world of British governance,  rancorous, feisty and verbal, but nowhere near as ideologically divisive as America’s current quagmire. But “Veep” mimicked “The Thick of It” anyway, imagining its characters to be bureaucrats besieged by incompetence and tempests-in-teapots, rather than bureaucratic zealots besieged by incompetence and tempests-in-teapots and other zealots. Not only was this a comedic mistake — the funniest, and most tragic, aspect of present-day American politics is the entrenched ideologies of its politicians — it defanged the satire. If only we were dealing with exhausted, cynical bureaucrats who don’t believe in anything, we’d have solved the sequester long ago,

When Selina had less to do, when she was staging ice cream photo ops and throwing meet and greets that no one attended, “Veep’s” lack of interest in partisanship was more glaring: How could “Veep” ignore the good, juicy stuff? How could “Veep” claim to be clear-eyed about politics when it had blinders on to most of it? But the closer one gets to power, the more pressing issues arise, plenty of which are nonpartisan. In the new season, Selina has to deal with a hostage crisis and midterm elections and the "Pol pot of pie charts" (Gary Cole as a new presidential adviser), and it doesn't matter quite so much that "Veep" isn't so interested in Republicans and Democrats.

“Veep” remains one of the most rapid-fire and linguistically playful shows on TV— neologisms created in just the first episodes include "exhuastipated," "procrasturbate" and "gestictionary." An entire plot revolves around overusing the word "robust."  But in the new season, the physical comedy is just as strong. Tony Hale, who plays Selina’s body man Gary (and also Buster Bluth on “Arrested Development”) is a brilliant physical comedian.  He brings a sort of anal retentive focus to his every movement. If he’s going to scrub a floor, he’s going to scrub hard and small. When he runs, his elbows stay tucked in too tightly. He’s an economical spaz, his weirdness expressed in small gestures. And, it goes without saying, Louis-Dreyfus is no slouch herself. The two of them do a slapstick lipstick-Oval Office-white carpet routine in the first episode that’s nearly perfect. In the second episode, the very tall, despised Jonah (Timothy Simmons) has to jackknife his body and then hold perfectly still to block a large pig on a spit from showing up behind Selina on camera. (She’s talking about Israel; no pork on screen when praising the Jews.) It's perfectly silly.

“Veep” has done what good sitcoms do: gotten better.  It only aired eight episodes last time around, a little more than a quarter of a network season, which is about how long it usually takes for funny shows to gel. Last season, I would watch and recognize that things were funny without laughing: I laughed plenty at the new episodes. Given the caliber of talent involved with "Veep" — first and foremost Louis-Dreyfus, who toggles between goofy and steely like no one else — it's almost a relief that it's improved. As Selina says, she's the fucking vice president, and she can demand respect. It's nice that now she also deserves it.