Russ Kremer's small pig farm served as the inspiration for a Chipotle ad, which praises his antibiotic-free pork 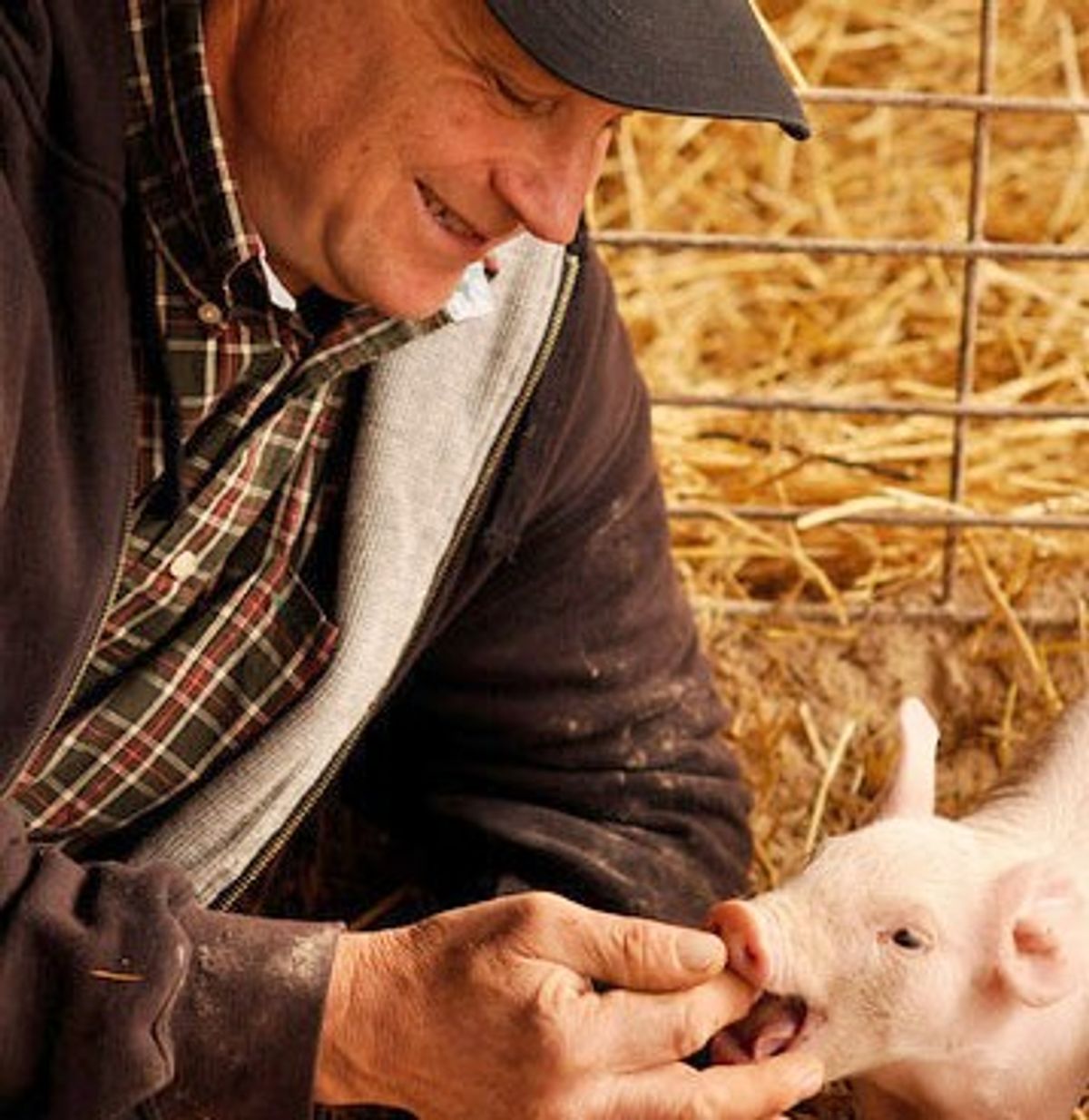 Priest or pig farmer? Those were the only two callings that Russ Kremer ever considered. And really, it wasn’t even close.

Raised in the hamlet of Frankenstein in central Missouri, a few miles from where he still lives, Kremer wasn’t even old enough to attend grade school when his father gave him the job of bottle-feeding orphaned piglets in the house. By age six, he had graduated to tending sows and their litters. At eight, Kremer’s father handed him a recently weaned female and said, "She’s yours." Kremer named her Honeysuckle and raised her like a pet, often lying beside her in her stall. She gave birth to 15 young -- a challenge because she only had 13 nipples. Normally, at least three piglets would have died, but Kremer switched the babies on and off their mother during the critical early weeks. All 15 survived.

For a time as a teenager, Kremer, a devout Catholic, considered becoming a priest. "I was always a person of faith," he says. "I went to Catholic schools and was inspired by the work priests did to help people." Even today, his voice, a soft twang, can take on reverential tones when he talks about his animals, and he’s been a life-long bachelor. But when he realized that he could never minister to a congregation and raise a herd of swine at the same time, he headed off to the University of Missouri, got a degree in animal husbandry, and returned home.

Instead of the catechism, he followed the canon of modern agribusiness.

To get more profit from the land, which his family had farmed for five generations, Kremer erected a long, low warehouse-like building and cycled 2,400 hogs a year through his operation. It wasn’t pretty. The sows that produced his piglets spent their entire lives confined to gestation and farrowing crates -- metal enclosures barely larger than the animals themselves, which barely allowed them to move. The piglets grew up cheek by jowl in metal pens. Stressed and sickly, the animals were fed a constant diet of commercial feed laced with low levels of antibiotics. Slatted concrete floors allowed their excrement to drop into a vast pit below the barn. Massive fans pushed out poisonous gasses from the pit. In the mid-1980s, a thunderstorm struck in the predawn hours of a Sunday morning, knocking out power. Within a few hours, more than 200 hogs suffocated from the gas. Instead of going to church that morning, Kremer dug a pit and buried them.

"Raising pigs like that was the worst mistake I ever made," he says.

The last straw came in 1989, when a 700-pound boar, eager to service a receptive sow, sliced open Kremer’s knee with one of its tusks. The leg became infected and ballooned to twice its normal size. Doctors treated him with a half dozen different antibiotics, but the virulent Streptococcus suis bacteria proved to be resistant to all of them. Kremer developed heart palpitations. His family was told to prepare for the worst. A last-ditch intravenous regimen of an extremely potent drug subdued the bacteria and saved his life. The germs that nearly killed him, he learned from his doctor, were identical to ones his veterinarian had found in dead pigs from his barns -- the same pigs he had been feeding antibiotics that made their bacteria more resistant to treatment. (For more on the rise of antibiotic-resistant bacteria in livestock, see "You Want Superbugs With That?")

"Right then and there, I got rid of every pig I owned. I said to myself, 'What the hell have I done?' At first I was going to give up raising hogs altogether. But it was all I ever wanted to do in my life."

So Kremer did the unthinkable: he bought new pigs and began to raise them without antibiotics. "I went cold turkey. Everyone I talked to told me I was crazy," he said. "All my pigs would die."

They were wrong. The first drug-free year, Kremer saved $16,000 in veterinary bills, and his hogs flourished. Unfortunately, the hog market collapsed in the late 1990s. One after the other, small family hog farmers in the county went out of business, often unable to sell pigs at any price to slaughterhouses designed to handle thousands of animals a day.

To survive, Kremer had to reinvent his approach to farming a second time. He and 33 other hog producers formed the Ozark Mountain Pork Cooperative to market their meat directly to commercial customers at premium prices. Members agreed to abide by a set of strict regulations: no antibiotics would be fed to the pigs. The animals had to have access to pasture. Their diet would consist of unadultered corn, soy, and oats. Sows could not be confined to crates. At slaughter, Ozark pigs would be killed painlessly after being rendered insentient by carbon dioxide gas. "I called it retro hog raising," Kremer says.

Joe Maxwell was one of the early converts. His family abandoned hog farming after four generations in the business. "The model didn’t work. Small farmers were closing down, going bankrupt, and driven off the land. The market was broke and nobody else was going to fix it," he says. "Banding together and selling a value-added product was the way forward. And our added value would come from building a model that was sustainable -- for the land, the animals, and us." The Maxwells now raise 5,000 pigs annually on 200 acres and plan to increase their herd by one-third this year.

Because of his hectic schedule as president of the cooperative, Kremer, now 55, produces only 1,200 pigs a year, about half as many as he did when raising them in confinement. "It doesn’t mean that I might not go back up to 2,400," he says. "We have enough land to expand and still do it the right way." At first sight, his farmland looks more like a forest reserve than an agricultural operation. Over 90 percent of the terrain consists of steep ridges covered in mature oaks and cedars. The clear areas are dotted with pastures and ponds. On a spring morning, a hundred or so three-month-old piglets the size of obese beagles cavort in a barn whose floor is covered in a deep layer of straw. White, brown, red, black, spotted, all are crosses of heritage varieties like Tamworths, Berkshires, and Durocs, bred for well-marbled, tasty meat, physical stamina, and good mothering instincts.

The piglets greet Kremer eagerly, nudging his legs with their snouts and nibbling the tops of his boots and the cuffs of his blue jeans. Others play a vigorous game of king of the mountain on a large round bale of straw, while a few tugged, puppy-like, on a tire swing suspended from the rafters. The barn doors stand open. Outside, small herds of piglets run in circles and frolic for sheer pleasure on a green field of rye on the valley floor.

Kremer, whose evangelism for the coop has earned him the moniker "Pope of Pork," steers his Chevy four-by-four pickup up a muddy track and sermonizes. He believes his approach to agriculture -- not the antibiotic-heavy confinement operations favored by agribusiness -- is what will feed the future. "We’re sustainable, and we can sustain the world," he says, stopping the truck beside a woodlot dotted here and there with metal hog houses. "In the fall, we let the pigs in the forest eat the acorns," he says. "These rocky ridges are excellent for raising pigs. Pigs like to root. Concrete slats just don’t cut it. We had to relearn what pigs were put on this earth to do. We try to mimic nature."

For its first several years, the Ozark Mountain Pork Cooperative lost money and went nearly $1 million into debt. Kremer spent most of his time traveling around the country trying to convert potential customers to his way of raising meat. A watershed moment came in 2006 when Whole Foods Market began carrying Ozark’s pork in Midwestern stores, quickly followed by Chipotle Mexican Grill and D’Artagnan, a New-York-city-area purveyor of gourmet food.

"About a dozen years ago, we decided to find farmers that were raising meat in a better way -- naturally and without antibiotics," says Chris Arnold, a spokesman for Chipotle. "We are constantly making efforts to look for better suppliers, and we loved Russ and his dedication." Arnold says that Kremer’s story helped inspire an ad that aired during the 2012 Grammy Awards, in which Willie Nelson covers Coldplay’s "The Scientist," singing "I’m going back to the start" as a cartoon pig farmer decides to abandon his massive factory-farming operation and return to the old-school model.

Today, Kremer’s coop is profitable. Members are paid according to a formula that takes the cost of feed into account and guarantees a fair wage and a reasonable return on the farmer’s investment. This spring, that means they'll receive about $1.15 a pound for their finished hogs, compared to the 85 cents that commodity growers are getting -- or about $50 more per animal.

The cooperative has now grown to include 60 local farmers, and Kremer expects a few more to join this year. The group processes about 1,300 pigs every week. Kremer has no aspirations to have the coop grow bigger. "I want to keep it a size where I know all the producers personally," he says. A network of farmers that Kremer is associated with recently purchased its own processing facility and slaughterhouse and is taking steps to make it sustainable and non-polluting. Soybeans are an important source of food for hogs, but nearly all the soy sold in the United States today is genetically modified, so the network also plans to build its own micro soybean mill and commission farmers to raise non-GMO soy for its feed.

Kremer, the lifelong bachelor, has even managed to find time for a girlfriend.

After leaving his farm, Kremer drives for about 10 minutes along winding gravel roads to the barn that houses a herd of about 20 sows; all have recently given birth. He enters, clucks his tongue and says, "Hi, guys," before seating himself on a bale of straw. A 400-pound sow occupying a nearby pen warily keeps an eye on her 13 piglets, each less than a day old and tiny enough to be held in a cupped hand. Then she slowly settles, forelegs first, then back legs, before rolling to her side.

"See how careful she is not to lie on her babies," Kremer says. The sow’s eyelids became heavy and eventually close as her litter suckles. Every so often she emits a deep, quiet grunt. "I can sit here and watch these guys for hours," Kremer says, the permanent smile lines etched around his eyes deepening. "They are so beautiful and happy, and curious and social. Even at this age, they all have distinct personalities. And I know they will never be stressed or fearful throughout their lives until they meet their maker." Amen.

A former contributing editor to Gourmet magazine, Barry Estabrook is the author of Tomatoland: How Modern Industrial Agriculture Destroyed Our Most Alluring Fruit and blogs at politicsoftheplate.com.