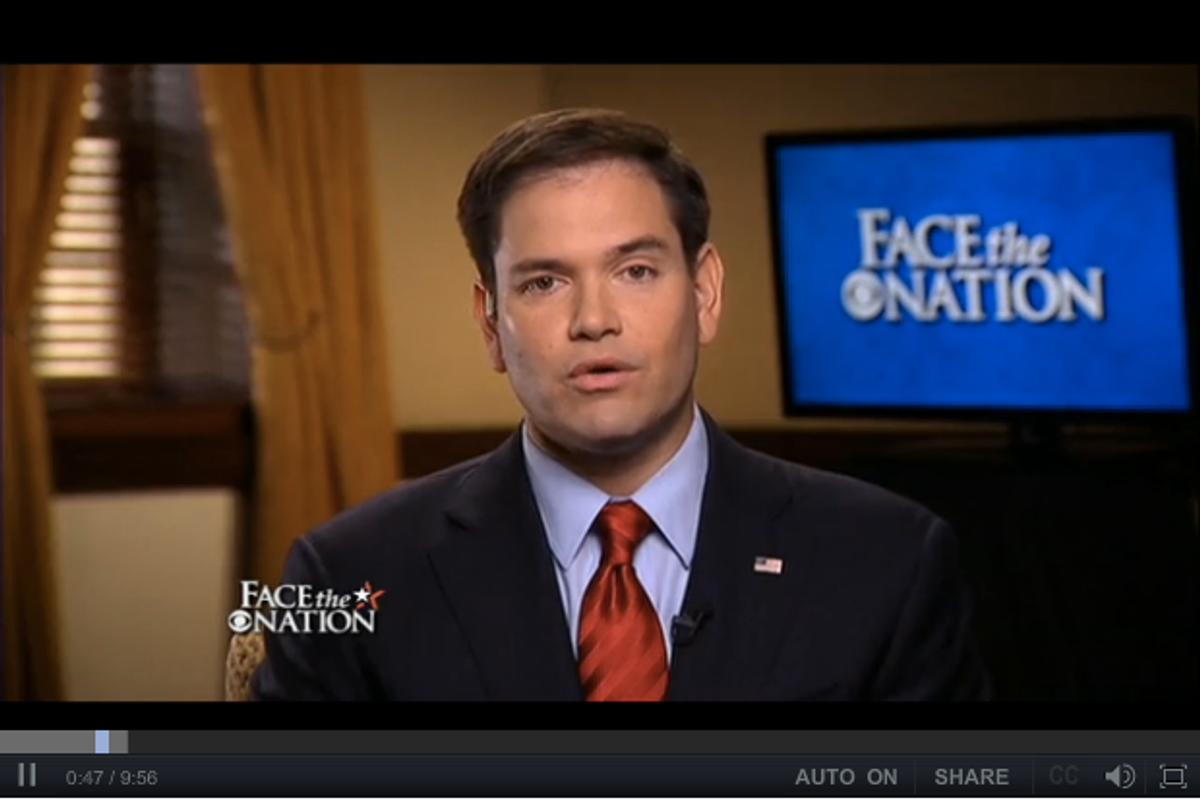 Sen. Marco Rubio (R-Fla.) joined the ranks of famous artist George W. Bush, marathon sprinter Michelle Bachmann and others by going "full Ginsburg" on Sunday to promote the Gang of Eight immigration reform proposal. ("Full Ginsburg" is a reference to Monica Lewinsky lawyer William Ginsburg, who was the first to appear on all five of the major network shows on the same day.)

But Rubio did Ginsburg one better during his immigration reform-themed media blitz. Two better, actually.

In addition to appearances on NBC's "Meet the Press," CBS' "Face the Nation," ABC's "This Week," CNN's "State of the Union" and "Fox News Sunday," Rubio stopped by Univision and Telemundo to promote a bipartisan package and swear up and down that he was really, really not offering amnesty to more than 11 million undocumented immigrants.

A roundup of Rubio's tough talk on immigration.

Well, first of all, I think it's important to understand it does not give anything. It allows people access to the legal immigration system. Number two, some people won't qualify. They haven't been here long enough; they've committed very serious crimes. They won't be able to stay. Number three is all people will get an opportunity to apply for things, to apply for a legal status, which isn't awarded on day one. I mean, there is a process for that. You have to pay an application fee and a fine, and you are going to have to stay in that status while you pay taxes and prove that you are not a public charge. And you don't qualify for any federal benefits. And after some period of time, over 10 years that's elapsed, the only thing you will get -- assuming that the border is secure, that e-verify is in place, that an entry exit system is in place for tracking visas, then the only thing you get is the chance to apply for a green card, like everybody else does. The only thing you are earning here is an opportunity to apply for temporary status, and ultimately potentially to apply for a green card, the way everybody else does. And that's the process that we are outlining.

Rubio promises "Meet the Press" that the Gang of Eight seriously does not believe in amnesty, seriously

It doesn't reward or doesn't award [undocumented immigrants] anything. But it does give them access to our legal immigration system through a process that will not encourage people to come here illegally in the future, and then through a process that isn't unfair for people that have done it the right way. If you're waiting to come legally to the United States now, no one who has done it the wrong way will get it before you.  In fact, it will be much cheaper, faster, easier and less bureaucratic if you're doing it the right way.

If [immigrants] pass that background check, they’ll be given the opportunity to pay an application fee and a fine, and in return for that they will get a worker permit that will allow them to stay in the U.S., work, travel, and pay taxes. They will not qualify for any federal benefits of any kind, including Obamacare, and they will have to be in that system for over ten years before they can apply to the existing legal immigration system for a green card, not a special path, the same path as everybody else. And of course that will be dependent upon certain security measures being met. That means securing the border, universal e-verify, and a universal entry-exit tracking system. If those three things are not in place, that green card process won’t begin -- even if the ten years has elapsed...

This bill does three things that are fundamentally important for our country. It modernizes our legal immigration system -- something we need to do no matter what. It puts in place the toughest enforcement measures in the history of the United States, potentially in the world. And it once and for all deals with the issue of those that are here illegally, but does so in a way that is fair and compassionate but does not encourage people to come illegally in the future, and isn't unfair to the people that have done it the right way.

Existing law, he went on to explain, "is actually more lenient" because undocumented immigrants will have to remain in nebulous undocumented legal purgatory for "longer than 10 years" before they can qualify for status.

Rubio tells "State of the Union" that undocumented immigrants will have to wait a really, really long time before gaining legal status

“For those who are undocumented, they will have to wait 10 years, more than 10 years,” Rubio told CNN's Candy Crowley. “We’re not awarding anyone anything,” he added.

Crowley pressed Rubio on why his proposal would make people wait a decade before being granted status, asking: “Why bother, if I’m someone that has figured out a way to live in this country comfortably, why would I go through the process.” Rubio's response? Because they will have no other choice, basically. Or, as he told Crowley: “Because you’re living in the shadows."

Rubio dismissed accusations that he was promoting amnesty by reminding his hosts that a ten-year waiting period (and various other hurdles) "is not amnesty,” he said. “Amnesty is the forgiveness of something.”

Video of Rubio on CBS' "Face the Nation":