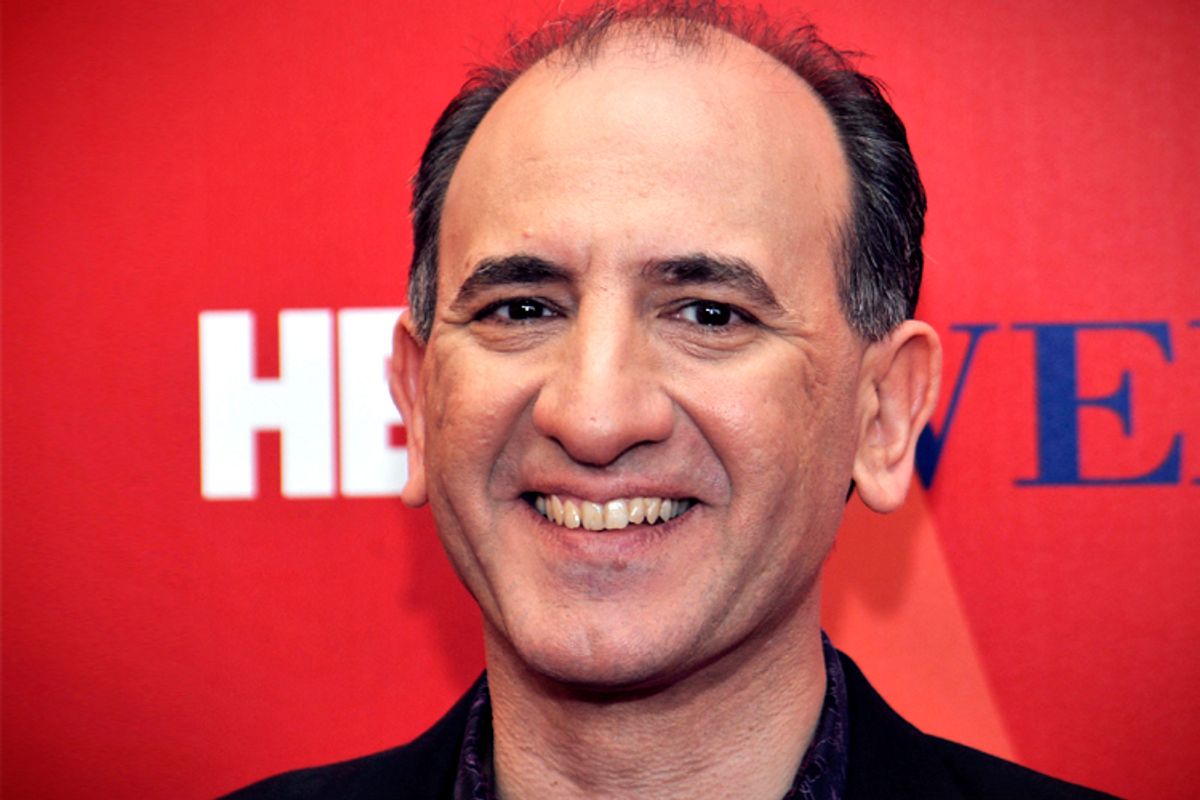 Armando Iannucci, the creator of HBO's "Veep," which returns for a much improved second season on Sunday night, is a master of the bureaucratic satire. Set in the world of politics, his shows, which also include the BBC's "The Thick of It," explore the hilarious ways that everyday banalities, crises and widespread incompetence grind everyone down, turning governance into a daily dysfunction. The glorious string of insults and curse words his civil servants are known for unleashing are the most creative and effective things they're likely to do on any given day.

I spoke with Iannucci, who is putting the finishing touches on "Veep's" second season in England, about giving Vice President Selina Meyer (Julia Louis-Dreyfus) a little more power, and the time someone took him around the real West Wing and said, "This is where CJ would sit."

What’s different about the new season?

I wanted to see a little more of a bigger stage, get a little closer to the center of power, get really into the West Wing and the White House and get closer to the president and see the president’s own staff and the chief of staff and so on. I think the first season is about getting to know Selina and her staff and the limitations of the job. And the second season is about what happens when you actually get some real power and real responsibility.

Be careful what you wish for.

And what is that?

I do believe that most people go into politics because they do have principles, and they do believe in something, and they do want to change. And the sad truth is they’re not going to get anywhere. You have to so compromise your principles and so change your whole mind-set and how you behave that by the end of it, a tiny, tiny victory, just because it’s been achieved, can take on a huge significance. So I think, the fact of it is, I think it just makes people go insane. Insane and extremely dysfunctional.

If Selina’s got to be a zealot about something, that immediately identifies her either as an extreme Republican or extreme Democrat, and therefore the whole season would be a commentary on something else. What I’m keen to show in the program is how D.C. is structured and how it functions on a day-to-day basis and what happens to the everyman or the everywoman if they get involved in that process.

Right, how it doesn’t function. It’s an interesting contrast: In the U.K., all the political parties are more toward the center, so it’s very difficult to distinguish one from another, whereas in America, a lot of politicians define themselves by being the complete opposite of their opponent. They campaign on the amount of legislation that they manage to stop as well as the legislation that they manage to get through Congress. It’s almost a badge of honor if you’ve gone the whole session without passing anything. The maximum impact you can have based on the minimum amount of representation. So if you are on a very small  minority that can somehow use procedure to halt a massive piece of legislation, that somehow is good.  Somehow by just talking for 13 hours that marks you out as a superhero.

So are you going to use filibuster at some point?

As we progress to episodes 6, 7 and 8, we get into a whole government shutdown scenario and two sides and the politics of when do you compromise and when do you deliberately obstruct? So we’ll be looking at that a little bit later on in the season.

I read that before "Veep" began you had access to American politicians and people who work in the State Department and that they had been eager to talk to you.

You know, it’s a strange thing, in the respect that they are portrayed, the fact that they are portrayed at all is almost like flattery. And when I say to them that I want to get it right, then that’s even more flattering. What they make of the end result, I have no idea. I found that DC is very much excited about showbiz and about Hollywood and about the media. I wound up being shown around the West Wing and someone showed me into a room, and said, “And this would be where CJ and Josh would sit.” I’m thinking, “Why are you saying that? It’s a TV show. Why can’t you say, ‘This is where the president would meet with the likes of Putin’?” It’s strange. It’s almost like the reality was the TV version that they aspire to and the everyday that they put up with is somehow a disappointment.

You noticed then that Americans in the State Department curse less than they do in England. That insight doesn’t feel like it’s shown up that much in “Veep,” though.

It’s a fine line, because you have to decide — you’re making fiction, you’re making comedy. Comedy’s always kind of a distortion or an exaggeration or a stretching of the truth. But also I’m aware that in any situation we show, I want it to feel like the characters are reacting as they would rather than as the writers are telling them to. The cursing reflects the reality of the situation. It’s a highly stressful environment, and people under that kind of stress manifest the stress in their language. But you know, [laughing] if it was set in a shoe shop or a bakery, it would be full of cursing as well.

There are some great neologisms in the new episodes: "exhaustipated," "procrasturbate." Do you have a special knack for those?

We have a history of coming up with new ones like that. There’s a word that we used in “The Thick of it” last year: "omnishambles." The Oxford English Dictionary has made it the word of the year, so it was actually officially coined in the English language, and we kind of like that. It goes back to that thing where it’s fine, people swear, and you could use the same swear words again and again, but we like to come up with new stuff to make it fresh. Language is a character in the piece. Everyone speaks in their own strange figures of speech. I enjoy doing that.

Well, we don’t, really. Once we have the script, we rehearse it a lot in advance of the shoot, so we can rewrite it on the back of the rehearsals. So it’s in the rehearsal room where we map how it’s set and the different scenes, and we play around. We workshop the scenes. And that’s where all the physical moments happen, the choreography and the people saying something behind someone else’s back and then turning around and all that. So it’s almost like we’re rehearsing a live stage production. That’s what we’re blocking in the rehearsal and then we add feedback into the script. So by the time we go onto the set, we have all those moves choreographed.

With a physical comedy bit, or any of the jokes, is there some point where you have to trust yourself that it was funny the first three times you saw it? I assume by the time you’ve seen it for the umpteenth time it’s not that funny to you anymore.

Oh, absolutely. But what I do then is I always show it to fresh eyes. I always get people to watch it, especially when you’re having to finish the edit off and you’ve seen it 100 times and it’s late at night and your eyes are streaming and you’ve got three other shows to look at after. But I always find a new audience privately just to watch it and just to remind me where the comedy is landing and where we can still speed things up or do a fresh take.

Before you were making “Veep” you mentioned an interest in doing a show set in the world of Google or Facebook. Are you still interested in doing something like that?

I’m still interested in that world. It’s just the power and influence. It’s the fact that 100 people in a sunny glassworks building on the West Coast, all of them under 30, somehow have a major influence on the lives of literally billions of people, and have access to information – very personal, private information. That I find interesting. That’s an interesting situation that we allowed to happen to us, and no one quite knows where it could go. It was fascinating a couple weeks ago, when somebody asked one of the CEOs of Google who was boasting about the amount of information that they have stored, somebody said to him, “What happens when Google no longer exists?” and he was completely floored, because the idea of Google no longer existing just hadn’t entered his train of thought.

Yeah, exactly. So what does happen to all that information they’re so proud of acquiring? And that we rely on so much? Where does it go?