As we sort out what exactly happened in Boston, the fact that the explosions aren't surprising is itself terrifying 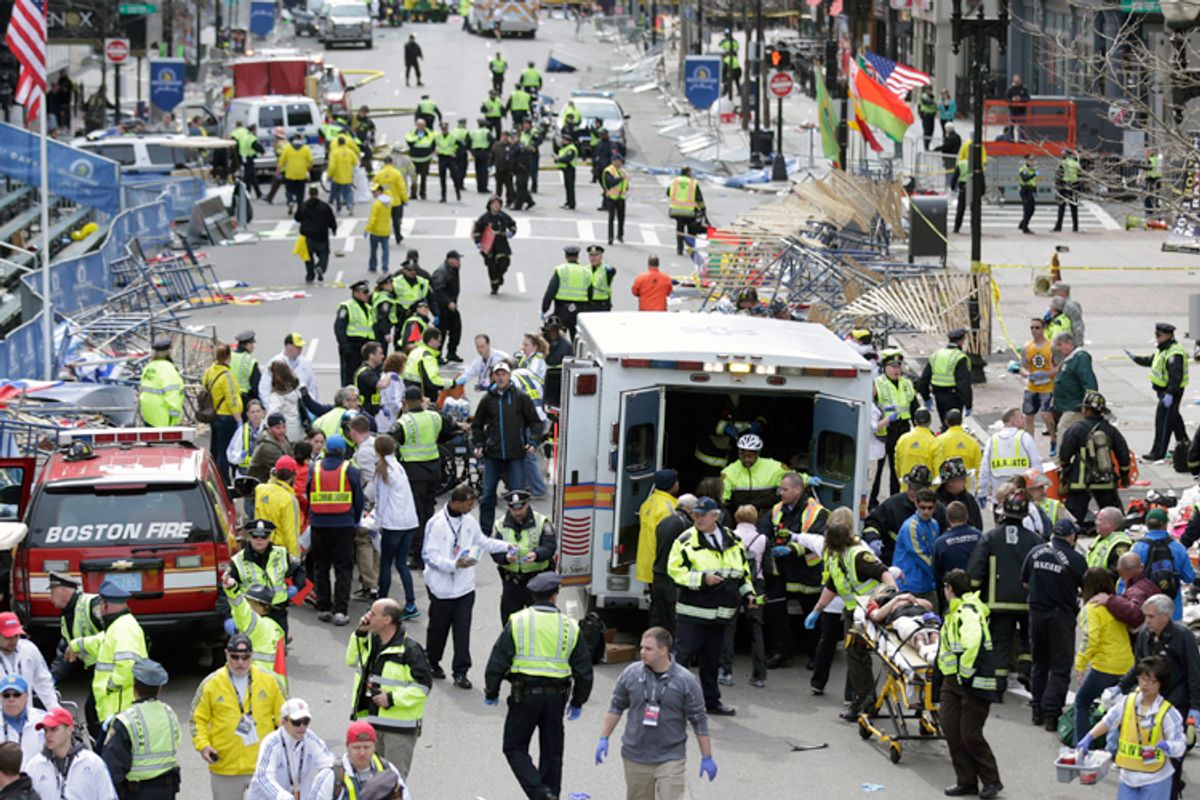 We don’t know what the cause of the Boston Marathon explosion yet. It could be terrorism (especially with initial reports of multiple explosive devices). It could be some infrastructure-related explosion. But the fact that such a catastrophe is no longer completely surprising is terrifying.

I heard the news as most did - through the digital grapevine. My initial reaction was the same as that of many people with loved ones in Boston - entirely personal and worried about possible friends and family who might have been maimed or, god forbid, killed. But while I fretted and texted and called, I also realized that something had changed in me -- and in all of us -- since I fled the U.S. Capitol back on Sept. 11, 2001. What had changed was that while I was nervous, worried, disgusted and anxious -- and while I was shaking my head muttering rhetorical questions about the senselessness of the world -- I was no longer shocked.

If it is terrorism, this will be classified -- as the TV anchors are now reminding us in "Clockwork Orange"-like repetition -- as simply life in the “post-9/11” era. If it is some sort of infrastructure-related tragedy, it will be classified as just daily life in a nation whose neglect of its physical plant brings us sinkholes, power outages and pipe explosions.

Whatever the cause of this catastrophe, though, the reaction is proof that we have reached a new normal -- one that increasingly defines major news events in America as those exclusively involving death and carnage.

Yes, it's true; since humans put pen to paper to report current events, news has always been defined by the "if it bleeds, it leads" ethos. But in recent years, with the heightened prospect of terrorism, the proliferation of mass shootings and the persistence of now-mundane gun violence, the aphorism seems like it has been flipped around: If it leads, or if it is even considered news, it inevitably must bleed.

On the other hand, we know that mass shootings have accelerated and that what the CIA calls "blowback" means that the possibility of retributive terrorism for our invasions and wars is persistent, if not on the rise. We also know from both the Department of Homeland Security and the high-profile episodes of anti-government terrorism that the possibility of domestic-sourced political violence is real.

In a 24-7 media environment that relies on visual stimuli, these latter realities get the disproportionate share of coverage, pounding home the notion that regardless of the general facts and statistics, we should be constantly afraid for our lives and, thus, unsurprised that we feel such fear on a daily basis.

And when you think about it, though the media barrage may be hysterical and at times irrational, the fear it generates ends up being perfectly logical, even if it is lamentable.

Think about it: We are a nation that is regularly bombing others, and often killing many civilians. As the Council on Foreign Relations noted, that is bound to generate retributive violence. We are also a heavily armed nation whose political and entertainment media is filled with apocalyptic rhetoric and rogue-celebrating story lines that glorify violence. In that sense, it is amazing (and incredibly fortunate) that there haven't been more mass terrorism events in America.

Likewise, we are a nation that willfully ignores its aging infrastructure to the point where the country's civil engineers have been sounding the alarm bell for years. In that sense, it is amazing that there haven't been more infrastructure-related cataclysms.