Obama: We still don't know who did this

UPDATED: Logan Airport and cell service are down in Boston. Graphic images 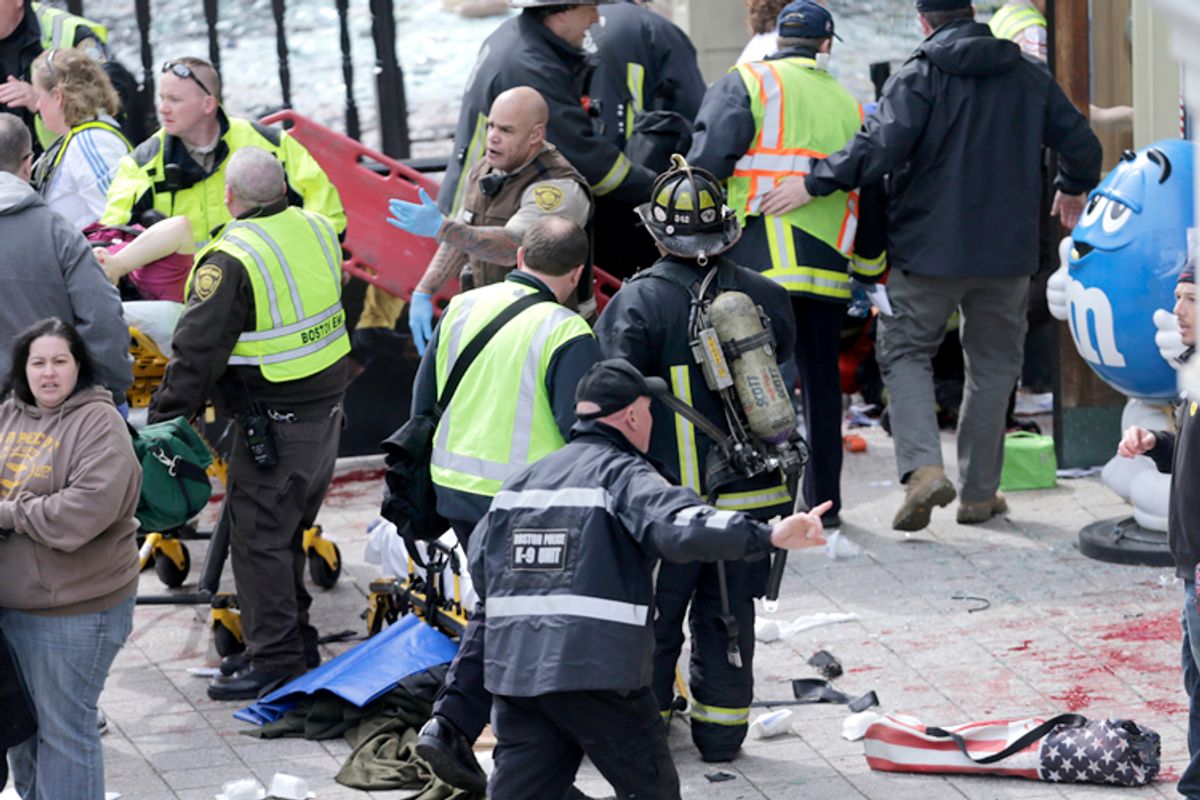 Updated: 5:26 p.m.
A Boston police spokesman tells TPM that no suspects are in custody, apparently contradicting the New York Post's report that a Saudi national has been detained.

Updated: 5:12 p.m.
The AP is reporting that cellphone service in the Boston area has been shut down to prevent remote detonations. That has to be adding to confusion in the city.

Updated: 5:07 p.m.
Another video of the second explosion:

Authorities have confirmed to The Post that they have identified a suspect in the Boston Marathon bombing.

The suspect — a Saudi national who suffered shrapnel wounds in today's blast — is currently being guarded in a Boston hospital.

Updated: 4:48 p.m.
The New York Post is reporting that a suspect is in custody and under guard.

NBC News reports the FBI has sent bomb specialists to the scene:

Another suspicious package identified, and a report of  an unexploded device on the glass footbridge over Huntington Ave near Copley place:

The AP is now reporting that more devices have been found and are being dismantled.

The New York Times has created a map of the bomb scene:

The FAA has imposed a three-mile radius no-fly zone. Here's the map:

President Obama has been notified of the bombing and has promised all necessary support, according to a White House statements. There have been numerous reports of first responders setting off "controlled" explosions. It's not immediately clear how many there have been. CNN is now reporting 28 injured.

Internet speculation has begun to swirl around today being tax day, as well as the Massachusett's holiday of Patriots' Day. Today was the Boston Marathon and opening day at Fenway Park.

Family members of marathon runners can check where they last checked in:

All off duty police have been activated:

The cause of the blasts is still unknown. CNN is reporting that two are dead and 22 are wounded as new attention has focussed on the JFK Library.

Tag Romney left the scene before the explosion:

The Boston Herald has eyewitness reports:

“I saw two explosions. The first one was beyond the finish line. I heard a loud bang and I saw smoke rising,” said Herald reporter Chris Cassidy, who was running in the marathon.“I kept running and I heard behind me a loud bang. It looked like it was in a trash can or something. That one was in front of Abe and Louie’s. There are people who have been hit with debris, people with bloody foreheads.”

“Somebody’s leg flew by my head, said a spectator who gave his name as John Ross. “I gave my belt to stop the blood.”

People were yelling, “I need my kids!”

“It was horrific!” said a man who gave his name as Brian Walker. “I saw some horrific wounds. You could literally feel the rush of wind.”

“There are at least a dozen that seem to be injured in some way,” Cassidy said.

The causes of the blasts are still not known. CNN is reporting that attention has now focussed on the Mandarin Hotel, a few blocks west of Copley Square. About three hours after the winners crossed the line, there was a loud explosion on the north side of Boylston Street, just before the photo bridge that marks the finish line. Another thunderous explosion could be heard a few seconds later.

"There are people who are really, really bloody," McLean said. "They were pulling them into the medical tent."

Livefeed from the scene:

Live video from your Android device on Ustream

Two explosions have been reported at the finish line of the Boston Marathon, with unconfirmed reports of at least a dozen injuries.

Photos and live reports from the scene: