The Fed messed with the wrong senator

If foreclosure victims get justice, trace it back to a bad decision to stonewall Elizabeth Warren last week 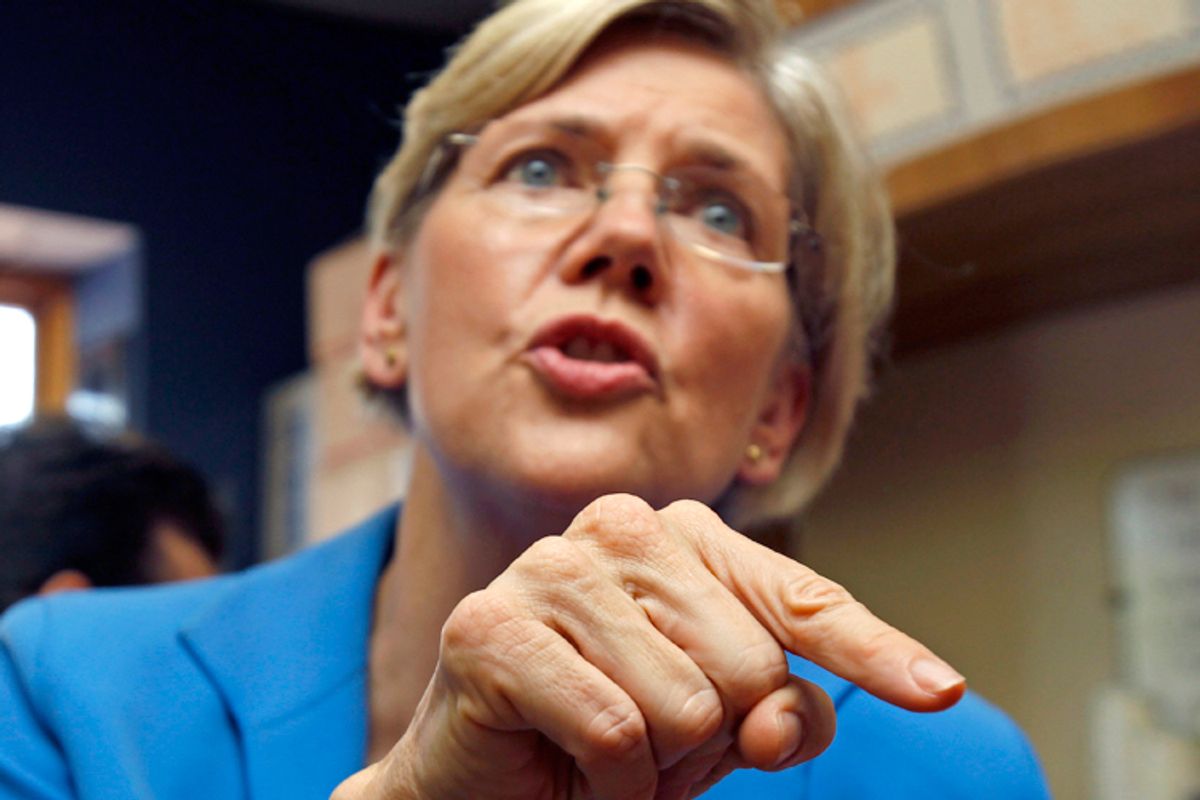 I have spent the better part of four years trying, with little success, to raise awareness about foreclosure fraud, the largest consumer fraud in the history of the United States.  In fact, there’s a whole little band of us writers and activists and foreclosure fighters. We have provided multitudes of evidence about fake documents, forged documents, illegal foreclosures, foreclosures on military members while they served overseas, foreclosures on homes with no mortgages, breaking and entering into the wrong homes, suicides by foreclosure victims, and above all the complete lack of accountability for these crimes and abuses.

But instead of giving voice to thousands upon thousands of victims of illegal foreclosures, instead of documenting the banks’ criminal practices, maybe what we all should have done is simply let the Office of Comptroller of the Currency – part of the Treasury Department -- and the Federal Reserve construct their own settlement with the banks. Then, when it utterly unraveled -- as it has over the past couple of months -- the unimaginable fraud heaped upon homeowners would get more attention than ever before, particularly from a frustrated and angry Congress led by Sen. Elizabeth Warren.

Indeed, despite OCC and the Fed’s best efforts to protect banks from harm, they’ve actually exposed them like never before. If I didn’t know better, I’d think there were moles among this gang-that-couldn’t-regulate-straight.

Before I get into Warren's role, first flash back to April 2011. Foreclosure fraud was in the news, at least in the business section. State and federal regulators were investigating. Embarrassing disclosures were occurring on a daily basis. And the OCC, the primary regulator for the banks doing the lion’s share of the foreclosing, had to answer for their complete lack of oversight and enforcement. So they came up with a solution.

Instead of joining with other regulators and leveraging their authority to generate the biggest penalties possible, OCC would break off (the Federal Reserve would join them), and pursue its own settlement. Announcing that 14 mortgage servicers committed “violations of applicable state and federal law,” OCC would allow 4.2 million homeowners in foreclosure in 2009 and 2010 to petition for an “independent” review, and would mandate specific restitution for any foreclosure found to be improper. The real goal was to find as few irregularities as possible, to “prove” that the problem was contained to a few isolated cases of sloppy paperwork, and to undermine the other state and federal regulators’ investigations. It was the perfect plan, if your idea of a good plan is to downplay bank malfeasance and subvert justice.

This plan began to take water from the moment it began. The Independent Foreclosure Reviews weren’t independent: OCC and the Fed, in their infinite wisdom, decided to let the banks hire and pay for their own third-party reviewers. The predictable consequences included a windfall for the bank consultants hired for the job – they made a combined $2 billion off the reviews – and numerous cases of reviewers deliberately minimizing evidence of borrower harm. Lax and often confusing oversight by OCC and the Fed, documented in a recent Government Accountability Office report, further turned the reviews into a catastrophe.

The OCC faced a moment of truth: Power through with expensive and obviously flawed reviews, or pull the plug. They did the latter. Instead of completing the 500,000 reviews requested by individual borrowers, they would merely slot all 4.2 million, whether victims of foreclosure fraud or not, into several broad categories, and pay out a total of $3.6 billion. The regulators refused to release the methodology underlying that process, or any of the completed reviews from the third-party consultants.

This all spilled out in an ugly manner over the past week. OCC released the payment announcement, and you can describe reactions with two words: laughable and infuriating.   The vast majority of borrowers – 3.4 million – will receive $1,000 or less. To pick a category at random, 234,000 borrowers had a loan modification approved, were kicked out of their homes anyway, and will receive for their trouble – for having their home effectively stolen – a whopping $300 (for comparison’s sake, the third-party consultants got $10,000 per review). In all, as many as 1.2 million borrowers faced foreclosure under potentially illegal circumstances. This translates to an endless supply of ready-made news stories about foreclosure victims who stand to receive an insultingly low check for their suffering, despite doing everything asked of them. CBS News has already started running them.

Rather than complying with congressional requests for additional information on the canceled reviews, OCC and the Fed decided to shroud the entire process in secrecy. And they picked maybe the worst person in Washington to stonewall: freshman Sen. Elizabeth Warren.

In a closed meeting last week, the agencies told Warren and Rep. Elijah Cummings that they could not provide documents Warren and Cummings requested about the specific violations by mortgage servicers, or the results of the reviews, because doing so would violate company “trade secrets” (apparently ripping off your customers and stripping their assets is now a valuable trade secret). Practically any other senator would not get much attention from being denied documents by a federal regulator.

But Warren, with a grass-roots army of enthusiastic supporters and a yen to deliver on her early promise, makes headlines crossing the street. And the foreclosure review debacle represented an excellent test case to expose the corrupt dealing between banks and the regulators who are supposed to curb their excesses, and also to pit Wall Street denizens getting rich off these crimes against ordinary victims who lost their homes. You couldn’t tee up a better issue for Warren, or a better entryway for traditional media to report it.

Last Thursday’s hearing on the reviews, the first congressional hearing on foreclosure fraud in over a year, provided the perfect set piece. Warren, along with Jack Reed, Sherrod Brown and other Senate Democrats, pounded the regulators for protecting the banks and ignoring homeowners suffering from illegal foreclosures. Warren highlighted that nobody will ever learn the precise extent of harm suffered at the hands of banks, and that without a true accounting, adequately compensating homeowners would be impossible. Brown focused on the role of the third-party consultants who operate as shadow regulators, performing work when the agencies lack capacity, but without any independence from the banks.

This drove more coverage about this topic than I’ve seen in a long time. Practically every major news outlet reported on the hearings, and it led prime-time nightly newscasts. None of it would have happened if OCC and the Fed simply finished the foreclosure reviews, flawed though they may have been, and quietly released the results at the end. Instead, the coverup, along with the crime, powered the headlines. And it led members of Congress to dig into questions previously left unaddressed through the financial crisis.

Even OCC admitted that additional legislation would be needed to ensure the integrity of third-party consultants. Rep. Maxine Waters, the ranking member of the House Financial Services Committee, introduced legislation that would mandate public disclosure of any agreements between banking regulators and financial firms that employ independent consultants. Under the legislation, the government would pay third-party consultants, rather than banks.  And individuals harmed by a consultant’s shoddy work would be able to sue that consultant for damages. These rules could finally lead regulators to stop outsourcing their responsibilities and end the third-party gravy train.

Sen. Warren urged OCC and the Fed to deliver information about foreclosure abuse to individuals, for use in private lawsuits against banks. This would increase the banks’ seemingly never-ending legal exposure for their role in the housing bubble collapse. Additional information about the reviews could lead to strengthened regulatory efforts to clean up the awful mortgage servicing industry. And the whole debacle adds fuel to Sherrod Brown’s bipartisan movement to break up the banks, with the idea that financial institutions which are too big to regulate are simply too big to exist.

At last Thursday’s hearing, OCC deputy chief counsel Daniel Stipano said about the reviews, “If we had to do it over again, we would take a different approach.” It was the understatement of the year. If there’s going to be justice for foreclosure victims who had their homes stolen, you can trace it back to this botched settlement, and the movement on Capitol Hill it inspired. State and federal regulators have promulgated untold settlements to sweep foreclosure fraud under the rug. Only this one actually led politicians and the public to pick up that rug and examine the dirt underneath.