Let's hope the Boston Marathon bomber is a white American

There is a double standard: White terrorists are dealt with as lone wolves, Islamists are existential threats 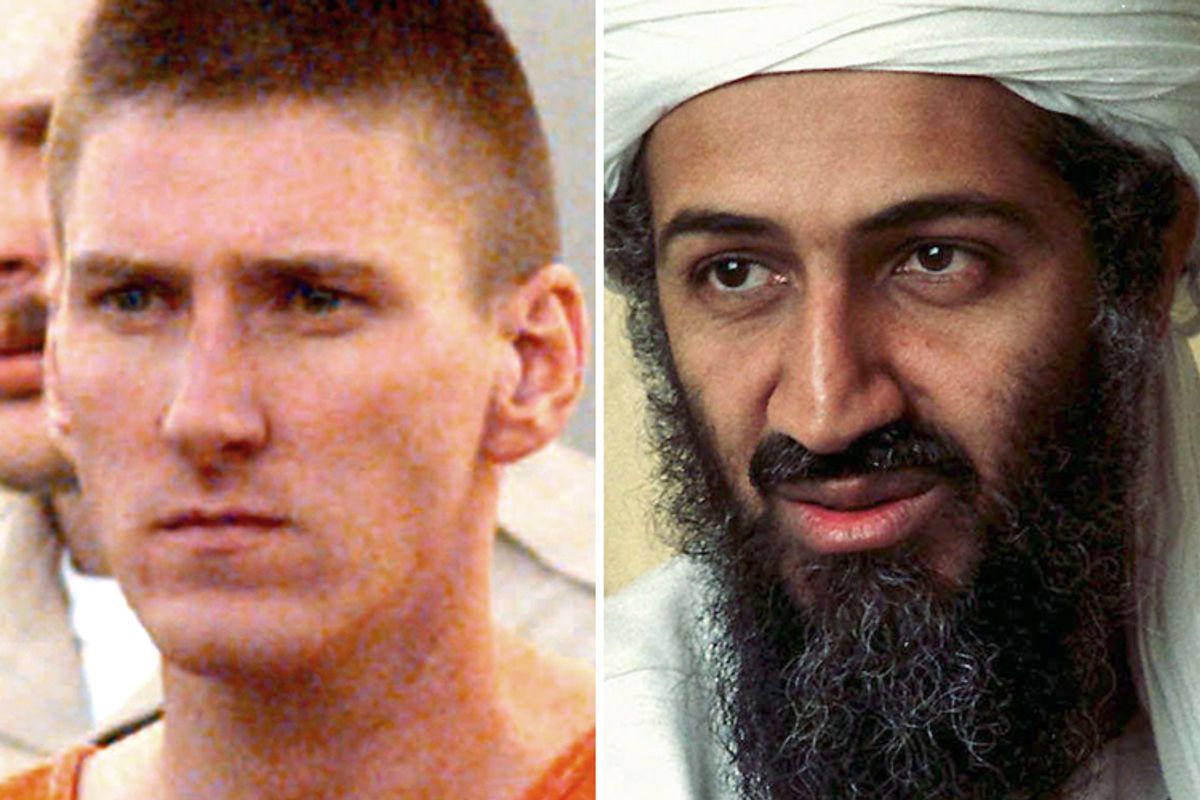 Updated: Sirota responds to critics of this piece over here.

As we now move into the official Political Aftermath period of the Boston bombing -- the period that will determine the long-term legislative fallout of the atrocity -- the dynamics of privilege will undoubtedly influence the nation's collective reaction to the attacks. That's because privilege tends to determine: 1) which groups are -- and are not -- collectively denigrated or targeted for the unlawful actions of individuals; and 2) how big and politically game-changing the overall reaction ends up being.

This has been most obvious in the context of recent mass shootings. In those awful episodes, a religious or ethnic minority group lacking such privilege would likely be collectively slandered and/or targeted with surveillance or profiling (or worse) if some of its individuals comprised most of the mass shooters. However, white male privilege means white men are not collectively denigrated/targeted for those shootings -- even though most come at the hands of white dudes.

Likewise, in the context of terrorist attacks, such privilege means white non-Islamic terrorists are typically portrayed not as representative of whole groups or ideologies, but as "lone wolf" threats to be dealt with as isolated law enforcement matters. Meanwhile, non-white or developing-world terrorism suspects are often reflexively portrayed as representative of larger conspiracies, ideologies and religions that must be dealt with as systemic threats -- the kind potentially requiring everything from law enforcement action to military operations to civil liberties legislation to foreign policy shifts.

"White privilege is knowing that even if the bomber turns out to be white, no one will call for your group to be profiled as terrorists as a result, subjected to special screening or threatened with deportation," writes author Tim Wise. "White privilege is knowing that if this bomber turns out to be white, the United States government will not bomb whatever corn field or mountain town or stale suburb from which said bomber came, just to ensure that others like him or her don’t get any ideas. And if he turns out to be a member of the Irish Republican Army we won’t bomb Dublin. And if he’s an Italian-American Catholic we won’t bomb the Vatican."

Because of these undeniable and pervasive double standards, the specific identity of the Boston Marathon bomber (or bombers) is not some minor detail -- it will almost certainly dictate what kind of governmental, political and societal response we see in the coming weeks. That means regardless of your particular party affiliation, if you care about everything from stopping war to reducing the defense budget to protecting civil liberties to passing immigration reform, you should hope the bomber was a white domestic terrorist. Why? Because only in that case will privilege work to prevent the Boston attack from potentially undermining progress on those other issues.

To know that's true is to simply consider how America reacts to different kinds of terrorism.

Though FBI data show fewer terrorist plots involving Muslims than terrorist plots involving non-Muslims, America has mobilized a full-on war effort exclusively against the prospect of Islamic terrorism. Indeed, the moniker "War on Terrorism" has come to specifically mean "War on Islamic Terrorism," involving everything from new laws like the Patriot Act, to a new torture regime, to new federal agencies like the Transportation Security Administration and Department of Homeland Security, to wars in Iraq and Afghanistan to mass surveillance of Muslim communities.

By contrast, even though America has seen a consistent barrage of attacks from domestic non-Islamic terrorists, the privilege and double standards baked into our national security ideologies means those attacks have resulted in no systemic action of the scope marshaled against foreign terrorists. In fact, it has been quite the opposite -- according to Darryl Johnson, the senior domestic terrorism analyst at the Department of Homeland Security, the conservative movement backlash to merely reporting the rising threat of such domestic terrorism resulted in DHS seriously curtailing its initiatives against that particular threat. (Irony alert: When it comes specifically to fighting white non-Muslim domestic terrorists, the right seems to now support the very doctrine it criticized Democratic presidential candidate John Kerry for articulating -- the doctrine that sees fighting terrorism as primarily "an intelligence-gathering, law-enforcement, public-diplomacy effort" and not something more systemic.)

Enter the Boston bombing. Coming at the very moment the U.S. government is planning to withdraw from Afghanistan, considering cuts to the Pentagon budget, discussing civil liberties principles and debating landmark immigration legislation, the attack could easily become the fulcrum of all of those contentious policy debates -- that is, depending on the demographic profile of the assailant.

If recent history is any guide, if the bomber ends up being a white anti-government extremist, white privilege will likely mean the attack is portrayed as just an isolated incident -- one that has no bearing on any larger policy debates. Put another way, white privilege will work to not only insulate whites from collective blame, but also to insulate the political debate from any fallout from the attack.

It will probably be much different if the bomber ends up being a Muslim and/or a foreigner from the developing world. As we know from our own history, when those kind of individuals break laws in such a high-profile way, America often cites them as both proof that entire demographic groups must be targeted, and that therefore a more systemic response is warranted. At that point, it's easy to imagine conservatives citing Boston as a reason to block immigration reform defense spending cuts and the Afghan War withdrawal and to further expand surveillance and other encroachments on civil liberties.

If that sounds hard to believe, just look at yesterday's comments by right-wing radio host Laura Ingraham, whose talking points often become Republican Party doctrine. Though authorities haven't even identified a suspect in the Boston attack, she (like other conservatives) seems to already assume the assailant is foreign, and is consequently citing the attack as rationale to slam the immigration reform bill.

The same Laura Ingraham, of course, was one of the leading voices criticizing the Department of Homeland Security for daring to even report on right-wing domestic terrorism. In that sense, she perfectly embodies the double standard that, more than anything, will determine the long-term political impact of the Boston bombing.