Where does the hate come from?

Amid this tragedy, we ought to remember that violence begets violence, force begets force 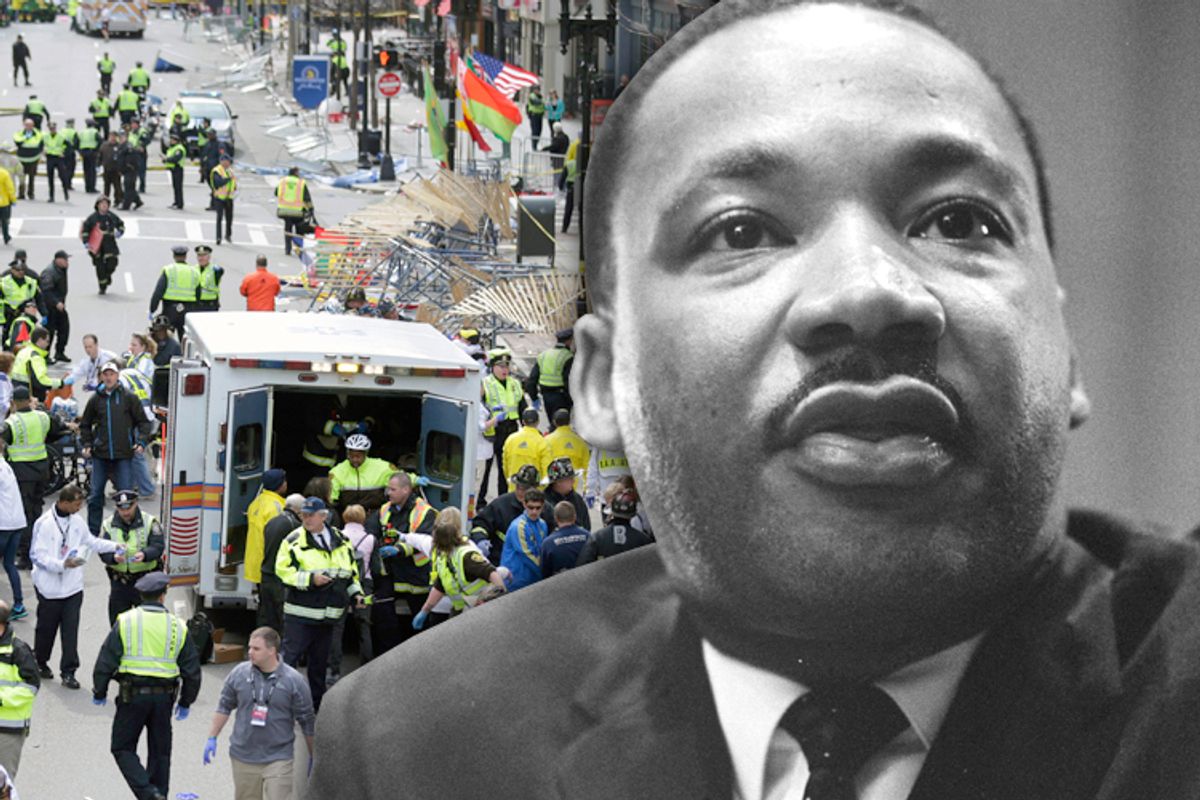 Yesterday’s news of multiple explosions going off near the end of the Boston Marathon route was heart-stopping. That such a joyous event — attended by tens of thousands of families, of international visitors and athletes -- could be so violently disrupted by such heinous evil was unfathomable. The tragedies are made all the worse by the realization that for some, it was a memorial in the name of the children and adults who died in the Newtown massacre. And even as I empathized with yesterday’s victims and their families, I shudder to think that they experienced what countries around the world treat as a fact of their quotidian existence.

That pain and grief was the same as that which occurs whenever I read another report about a U.S.-led drone strike that has killed children, maimed teenagers, destroyed weddings in Pakistan or Yemen or Afghanistan. Yesterday’s news — of a child dead, of the injuries of many a father and mother, of the limbs of exhausted athletes and supportive spectators blown off, of others whose limbs were amputated in the triage for survival — again brought to mind the prophesy of "violence begetting violence." As Dr. Martin Luther King, Jr. warns in his “Loving Your Enemies” sermon, delivered in Montgomery, Ala., on Nov. 17, 1957:

Men must see that force begets force, hate begets hate, toughness begets toughness. And it is all a descending spiral, ultimately ending in destruction for all and everybody.

And yet, that cycle of force begetting force, of the increasing permanence of violence that is soaking into every facet of our society, seems to be lost on so many, especially those who are capable of stopping it: our political and military leaders. Again, in the prescient, wise words of Dr. King:

The bomb explosions occurred on Monday afternoon, less than 48 hours after a heart-stopping Op-Ed, “GiTMO is Killing Me,” appeared in the Sunday New York Times. In it, Samir Naji, one of the hunger-striking prisoners in Guantánamo, describes the sheer unceasing brutality that he has suffered during his strike. His treatment includes being forcibly fed through the nose — a method that has been classified as torture by some human rights organizations — among other vicious treatment. As we know from another GiTMO prisoner, Shaker Amer, prisoners have long suffered daily humiliations, from beatings to forced sleeplessness to frigid temperatures to so many other unspeakable cruelties.

And to add injury to insult, Amer, Naji and 64 other detainees have been cleared for release. Many of the other 120 prisoners have not been charged. In that light, it is clearly in the U.S. interest to keep Guantánamo prisoners like Naji alive, since his death would considerably amplify the Obama administration’s (and the former Bush administration) sheer ethical mud pit of caging men who have never been charged. Naji’s story, told to his lawyer by phone, was published in one of the nation’s leading state organs — a newspaper that often reproduces uncritically the government’s interpretation of the War on Terror. That fact gave me hope: that perhaps the American public might be open to entertaining the obvious, that these prisoners have been held unjustly for years. I even fantasized that sympathetic Times readers might be able to leverage an outraged collective political will to impel the President to release these prisoners from their cruel and endless confinement. This would be the spirit that Dr. King insists we must embrace in order for violence to end.

Yet, 24 hours after the appearance of Naji’s Op-Ed, the Times also published the news that a school in Missouri, under the direction and approval of its school board, had trained its teachers to carry guns in their school. This policy was thought to be a solution to the violence of the Newtown shootings that occurred last November.

These events are augmented by the endless drone attacks, bombs and targeted assassinations that the U.S. has leveled all over the world in the name of fighting terror and terrorists. Many of those attacks intensified under the Democratic Obama administration. While some segment of the public is aware of it and, depending upon which poll one reads, approves of it, many are either unaware or unsympathetic to the heinous casualties that the U.S. has inflicted on thousands of families in Pakistan, Yemen and Afghanistan, among other places. The testimonies of the havoc wreaked by U.S. actions seem to mirror the heart-wrenching pain that families in the U.S. — and Americans generally -- have felt, whether in Newtown, Conn., Aurora, Colo., New York or Boston.

All of these events happen (loosely) within the confines of the American political theater. They revolve around the recycling and regenerating of violence, which seeps less and less conspicuously into every level of American society. Our children, some of whom have been directly victimized through these attacks, will be victimized in other ways: by growing up in a society that endorses state-led violence, school-led militarization of places of education, or of finding it normal to be surveilled at every turn — through GPS in cars and cellphones, email tracking, buses, cellphones, school buildings, computers or cameras — all in the name of their “safety.”

Yesterday’s victims will include more than the Boston marathoners and their families and spectators who were injured. They will include more than the runners who came to Boston from every part of the world to participate in one of the most well-known sports events. As several journalists have reported, the victims will continue to include dark-skinned and Muslim populations, both in the United States and around the world. And Muslims themselves know it: As Alex-Seitz Wald reported, many Muslims are praying that the suspects are not Muslim. Others, as Glenn Greenwald reports, from Pamela Geller to the New York Post already — groundlessly -- jumped to the opposite of that conclusion. Even Chris Matthews, speculating on who done it, casually remarked that "it's hard to escape the conclusion this is an act of terrorism," as opposed to some other act of violence, because terrorists like to “hit the people where they’re happiest,” or their most joyous, like at weddings." Yet, Matthews didn’t remark on the striking similarities between those targets and the fact that the U.S. often targets wedding parties with missiles; or on the fact that teenagers lose their limbs, their lives, their families in numerous bomb and drone attacks leveled by the United States.

Instead, the example that Matthews gave was an attack in Bali that was waged by a fundamentalist Islamic group in 2002 (the same year that the Bush administration killed 30 Afghans at another wedding party by bombing them). The widespread suspicion on the part of conservatives and some liberals that Muslims are behind yesterday’s attack may perhaps be borne out. But, as Rachel Maddow listed last night, there have been many bomb attacks in the U.S. in which many non-Muslims — indeed white men -- were the perpetrators. As such, it is deeply disturbing that the immediate reactions of supposedly liberal pundits is to lead the public to assume that Muslims or brown men of some variety must systematically be behind such events.

Muslims will continue to be victimized in the wake of yesterday’s events, I suspect. I also suspect, even as I hope I am wrong, that yesterday’s bombing will become a renewed pretext for the state not to "dim the lights of destruction," as Dr. King pleads, but to strip even more of our privacy, to continue to militarize every aspect of our civilian lives, to continue to punish whistle-blowers and critics of the conscience-less policies as enacted by the U.S government in the name of “National Security” — in the name of "protecting" us. This has been the U.S. government’s response to events like 9/11 and the Christmas bombings and others, which have shattered the conceit that the U.S. is impenetrable, invulnerable to the hostility and anger of those peoples around the world.

Again, Dr. King points to the cycle of hatred that breeds more hatred and destruction:

Why were two bombs set yesterday? Why did they hurt so many people who were just out to enjoy the beautiful day and take refuge in beauty of the human body’s endurance and athletic prowess? Why were they set up to hurt – not just physically but psychically -- so many people who were visiting Boston from around the world? Time may give us some answers to those questions, but it may also withhold them until we are ready — finally — to see what those answers are.

Maybe it’s time to respond with a different approach: one that begins to increase unity rather than tribalism, one that promotes understanding rather than increasing antagonism. Perhaps we need to start by acting justly, starting afresh, even in the midst of pain, to dim, as Dr. King says, the lights of destruction, and brighten the lights of convivenza — of learning to live together peacefully again. Maybe, then, yesterday’s horrible tragedy can have some larger, more constructive path to look forward to.