The surveillance state thrives on acts of terror. All the more reason why we need more protections for our rights 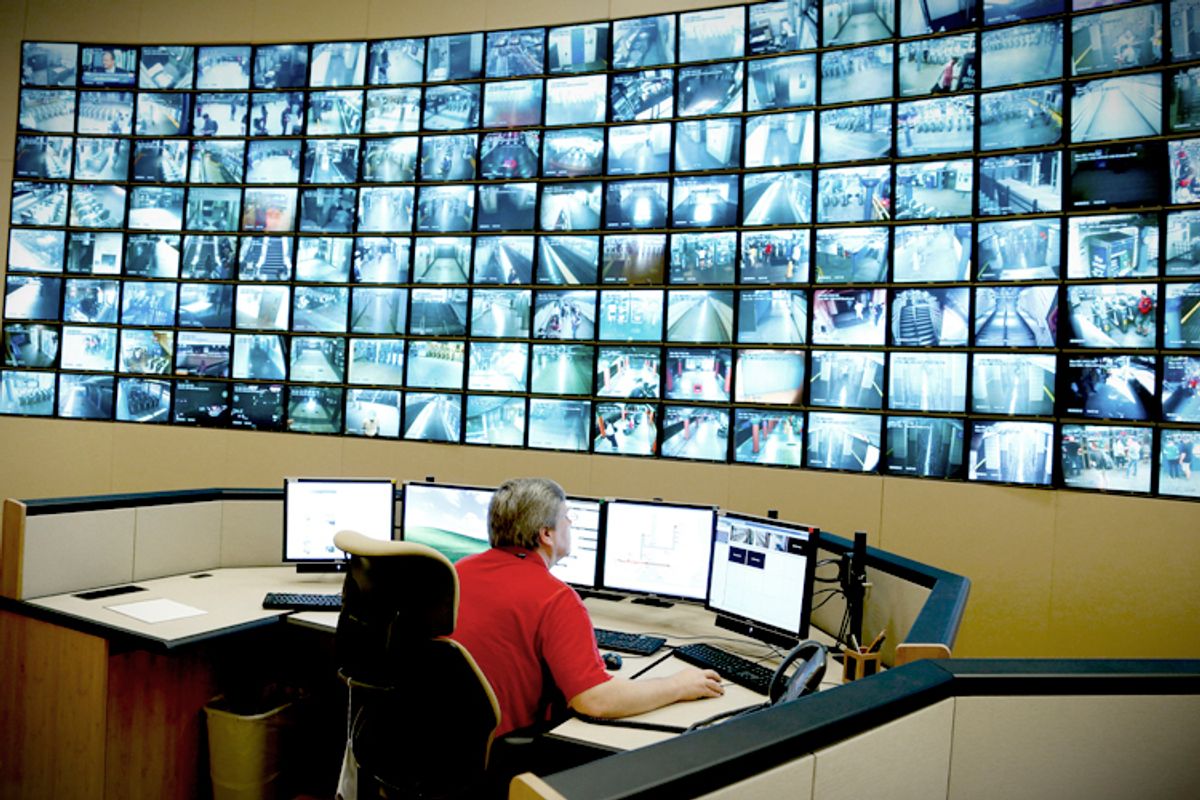 Here's a fair bet: Over the last 24 hours, the intensity of the American surveillance society reached an unprecedented fever pitch in Boston. Law enforcement authorities are tracing every cellphone call made at the time of the bombings, reviewing every email or text message associated with each "person of interest" identified in the investigation, and scrutinizing every second of available closed circuit video coverage. You'd better hope you didn't recently Google how to make a homemade bomb or what the exact route of the Boston Marathon is, or save an oddly titled file in Dropbox or even just like the wrong video on Facebook, because someone, even now, is probably poring over that information. Events like the Boston Marathon bombings are what the surveillance state lives for.

"We will go to ends of the earth to find those responsible for this despicable crime,'' said FBI special agent Richard Deslauriers at a press conference in Boston on Tuesday morning. But what he really meant was we will leave no digital stone unturned. Every one and zero will be interrogated.

We don't yet know why the Boston Marathon was attacked on Patriots' Day 2013 or who did it, but here's another bet: We'll find out. Our data trails are too incredibly rich and detailed. We are far more trackable today than we were on Sept. 11, 2001. And with each day that passes there is more data available to be crunched. Much of it is stunningly easy for law enforcement authorities to get their hands on, with or without a warrant.

More than a few of us are probably OK with law enforcement going the extra digital mile in the immediate aftermath of a horrific event like the Boston Marathon bombings. We want the malefactors caught. We want justice done. In the present scenario it's difficult to imagine Google or Facebook or Verizon or AT&T denying any law enforcement request for information, just as it's impossible to conceive of any judge delaying very long in granting a search warrant for anything related to the bombing investigation. Acts of terror tend to trample due process.

But this is where we need to take a deep breath. One reason why law enforcement authorities have so much freedom to access our data is that 9/11 changed prevailing attitudes about the acceptable tradeoffs between privacy and national security concerns. It's possible that the same kind of dynamic could result from the Boston Marathon bombings. Efforts to update hopelessly obsolete laws covering electronic privacy and surveillance that are even now underway will be influenced, potentially for the worse. Government authorities are already asking for  greater access to our data. With the blood spattered in Boston fresh in their memories, legislators may be inclined to give it to them.

That would be a mistake, because the temptation to abuse these powers when real, pressing national security concerns are not an issue will be difficult for law enforcement authorities to resist. We already know that their appetite to take advantage of the new possibilities inherent in our networked, digital, always-on lives is insatiable. Google reported in January that requests for data from U.S. government authorities surged in 2012, up 136 percent from 2009. The Gen. Petraeus adultery fiasco showed us just how easy it is for law enforcement agencies to get a look at our email, even when there is no evidence that a crime of any sort has even been committed.

"Surveillance is a form of power," says Lee Tien, an attorney with Electronic Frontier Foundation. "I think that we want to get the bad guys but we also understand that power corrupts and absolute power corrupts absolutely. "

Tien makes an argument that in recent years the pendulum has swung away from post-9/11 panic to a more reasoned appreciation of the privacy rights of a civilized society. Courts are beginning to take a harsh look at law enforcement authority demands for such things as warrantless access to GPS tracking data. The growing clamor about the surveillance and privacy impact of drone technology is another sign, he said, that society has come to terms with the shock of 9/11.

"I think that there has been a real appreciation that we started to let the genie out of the bottle on privacy and surveillance," said Tien, "and I think that now there is a higher likelihood of a more measured and thoughtful response precisely because we went through 9/11."

The Boston bombings might throw a temporary wrench into this maturation process, acknowledged Tien, but the incident should also serve to reinforce the need for clearer rules and stronger protections.

"In times of stress," said Tien, "it helps to have strong laws. That's why we have a Constitution.

"The tension between wanting to have the surveillance to get the bad guys and our civil liberties values is what actually defines us as a society," Lee continued. "It's a constant tension, and no one can say it is easy, that it doesn't make you work hard and search your soul about what is the right thing to do. But it does cause you to have that conversation, and I think that is the most important thing: that we always have that kind of conversation. "