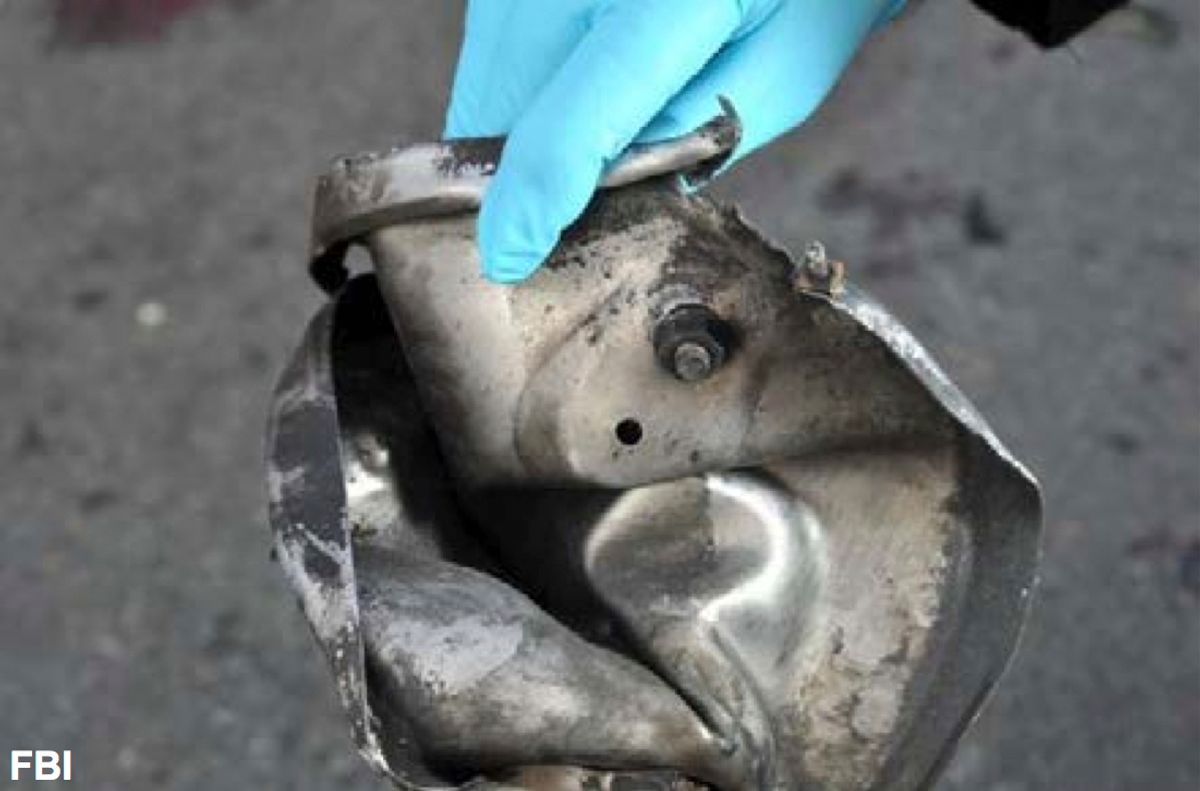 The remains of a pressure cooker that the FBI says was part of one of the bombs that exploded during the Boston Marathon. (Associated Press)
--

Since the Oklahoma City in 1995 where Timothy McVeigh used a homemade truck bomb with two tons of fertilizer, racing fuel and a blasting cap to destroy the federal building and kill 167 people, there have been a dozen domestic bombings where domestic or foreign-born attackers have sought or tried to kill people to send a message.

On Tuesday, police said that the two bombs that killed three and injured 176 people at Monday’s Boston Marathon was a homemade device—a metal pressure cooker filled with nails, ball bearings, metal shards that were left in duffle bags near the finish line. This is similar to roadside bombs used against U.S. troops in Iraq and Afghanistan, various news organizations reported.

What follows is a list of other domestic bomb attacks and attempts dating back to 1995, with additional details on the types of bombs used.

• Jan. 17, 2011. White supremacist Kevin Harpham put a backpack bomb along a Martin Luther King Day parade route in Spokane, WA., but it was found and disabled. “The pipe bomb was loaded with lead fishing weights coated in rat poison, which can inhibit blood clotting in wounds,” AOL.com reported. Harpham was sentenced to 32 years in prison.

• May 1, 2010. Pakistani immigrant Faisal Shahzad left an explosives-laden SUV in New York’s Times Square. Smoke was seen coming from the car and the bomb was found and disabled. The car was “packed the car with more than 100 pounds of fertilizer, but not the kind that would explode,” ABC-TV reported. Other news reports said he put the fertilizer in pressure-cookers—like the Boston bombs—and used firecrackers as the trigger. Shahzad was taken off a plane by police and was sentenced to life in prison.

• Dec. 25, 2009. A Nigerian, Umar Farouk Abdulmutallab, was subdued by passengers and the crew after trying to blow up a plane in midflight from Paris to Detroit by using plastic explosives hidden in his undergarments. He was sentenced to life in prison.

• Sept. 11, 2001. Four commercial jets were hijacked by 19 al-Qaida militants and used as suicide bombs, destroying New York City's World Trade Center towers, crashing into the Pentagon and into a field in Pennsylvania en route to Washington. Nearly 3,000 people were killed in New York, Washington and Pennsylvania.

• Jan 22, 1998. Theodore Kaczynski, the so-called Unabomber, pleaded guilty in federal court in return for a life sentence without parole. He was responsible for 16 attacks that started in 1978 and lasted until 1995, killing three people and injuring 23 others. His first bombs used smokeless explosive powders, while his later devices were complicated nail-and-splinter-loaded bombs that were made with wooden parts and designed to explode when opened by intended recipients who received them in the mail.

• July 1996 to January 1998. Eric Rudolph, an anti-abortion activist, was responsible for four bombings from 1996-98, all using slightly differing homemade devices. Speaking of the most infamous attack, at Centennial Park in Atlanta, HistoryCommons.org said:

“Rudolph plants a US military field pack containing three pipe bombs surrounded by five pounds of nails (which function as shrapnel) underneath a bench near the base of a concert sound tower, and flees the scene. The bomb, a 40-pound construction considered to be the largest pipe bomb in US history, has a directed charge and could have done even more damage, but is knocked over sideways sometime between its planting and its detonation; FBI agent Jack Killorin will later say it is a “fluke” that the bomb did not kill dozens of people.

On Jan. 20, 1998, he bombed an abortion clinic in Birmingham, Ala., killing a guard and maiming a nurse. On January 16, 1997, he put two bombs outside of an abortion clinic in an Atlanta suburb, Sandy Springs, injuring six. The second bomb went off after police arrived. On Feb. 21, 1997, he put a bomb outside a lesbian bar in Atlanta that injured five people. And on July 27, 1996, he bombed the Summer Olympics, killing two people and injuring more than 100. He was arrested in 2003 and was sentenced to life in prison.

The New York Times said Rudolph’s bombs used different explosives. “The Centennial Olympic Park bomb, for instance, used Accurate Arms-brand smokeless gunpowder, while the bombs set at the office building and the nightclub contained sticks of dynamite… [But] bombs in all three incidents, for instance, were timed with a Westclox-brand Baby Ben windup alarm clock and made use of steel plates.”

• April 19, 1995: Timothy McVeigh used a truck bomb outside the Murrah Federal Building in Oklahoma City to kills 168 people and injure more than 500. His attack was the deadliest U.S. bombing in 75 years, only supplanted by the 9/11 attacks in 2001. He was convicted and executed in 2001. He accomplice, Terry Nichols, got life in prison.

“The truck bomb weighed an estimated 4,000 pounds and was believed to be composed of ammonium nitrate fertilizer and nitomethane racing fuel and detonated by a blasting cap,” Yahoo.com reported.