The suspect is expected at a Boston courthouse 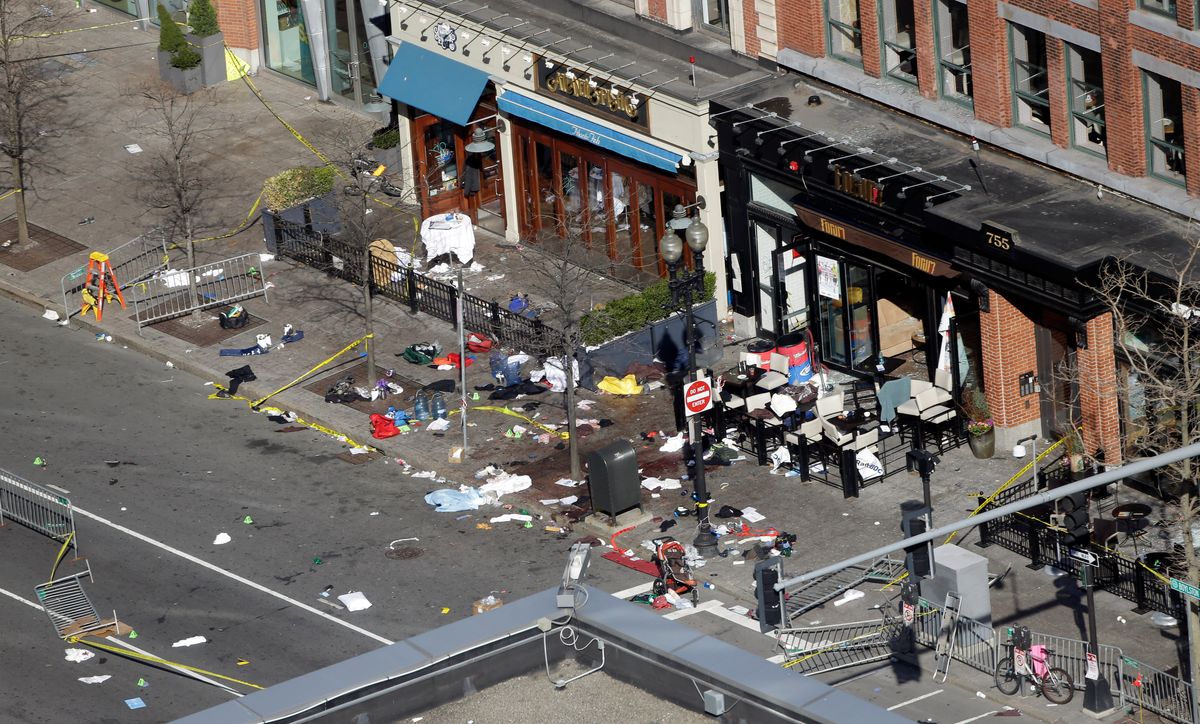 One of the blast sites on Boylston Street near the finish line of the 2013 Boston Marathon. (AP/Elise Amendola)
--

BOSTON (AP) — A suspect in the Boston Marathon bombings was taken into custody Wednesday in a breakthrough that came less than 48 hours after the deadly attack, a law enforcement official briefed on the investigation said Wednesday.

The official spoke shortly after several media outlets reported that a suspect had been identified from surveillance video taken at a Lord & Taylor store between the sites of the two bomb blasts, which killed three people and wounded more than 170.

The official was not authorized to divulge details of the investigation and spoke to The Associated Press on condition of anonymity. The suspect was expected at a Boston courthouse, the official said.

Law enforcement agencies had earlier pleaded for the public to come forward with photos, videos or any information that might help them solve the twin bombings.

Investigators circulated information about the bombs, which involved kitchen pressure cookers packed with explosives, nails and other lethal shrapnel. But the FBI said nobody had claimed responsibility.

A person close to the investigation had previously told AP the bombs consisted of explosives put in 1.6-gallon pressure cookers, one with shards of metal and ball bearings, the other with nails.

Investigators in white jumpsuits had fanned out across the streets, rooftops and awnings around the blast site in search of clues on Wednesday. They combed through debris amid the toppled orange sports drink dispensers, trash cans and sleeves of plastic cups strewn across the street at the marathon's finish line.

President Barack Obama branded the attack an act of terrorism. Obama plans to attend an interfaith service Thursday in the victims' honor in Boston.

Scores of victims of the Boston bombing remained in hospitals, many with grievous injuries. Doctors who treated the wounded corroborated reports that the bombs were packed with shrapnel intended to cause mayhem. In addition to the 5-year-old child, a 9-year-old girl and 10-year-old boy were among 17 victims listed in critical condition.

The trauma surgery chief at Boston Medical Center says most of the injuries his hospital treated after the marathon bombings were to the legs.

"We have a lot of lower extremity injuries, so I think the damage was low to the ground and wasn't up," Dr. Peter Burke said. "The patients who do have head injuries were blown into things or were hit by fragments that went up."

Dozens of patients have been released from hospitals around the Boston area.

At Massachusetts General Hospital, all four amputations performed there were above the knee, with no hope of saving more of the legs, said Dr. George Velmahos, chief of trauma surgery.

"It wasn't a hard decision to make," he said Tuesday. "We just completed the ugly job that the bomb did."

The bombs exploded 10 or more seconds apart, tearing off victims' limbs and spattering streets with blood. The blasts near the finish line instantly turned the festive race into a hellish scene of confusion, horror and heroics.

The blasts killed 8-year-old Martin Richard, of Boston, and 29-year-old Krystle Campbell, of Medford. The Shenyang Evening News, a state-run Chinese newspaper, identified the third victim as Lu Lingzi. She was a graduate student at Boston University.