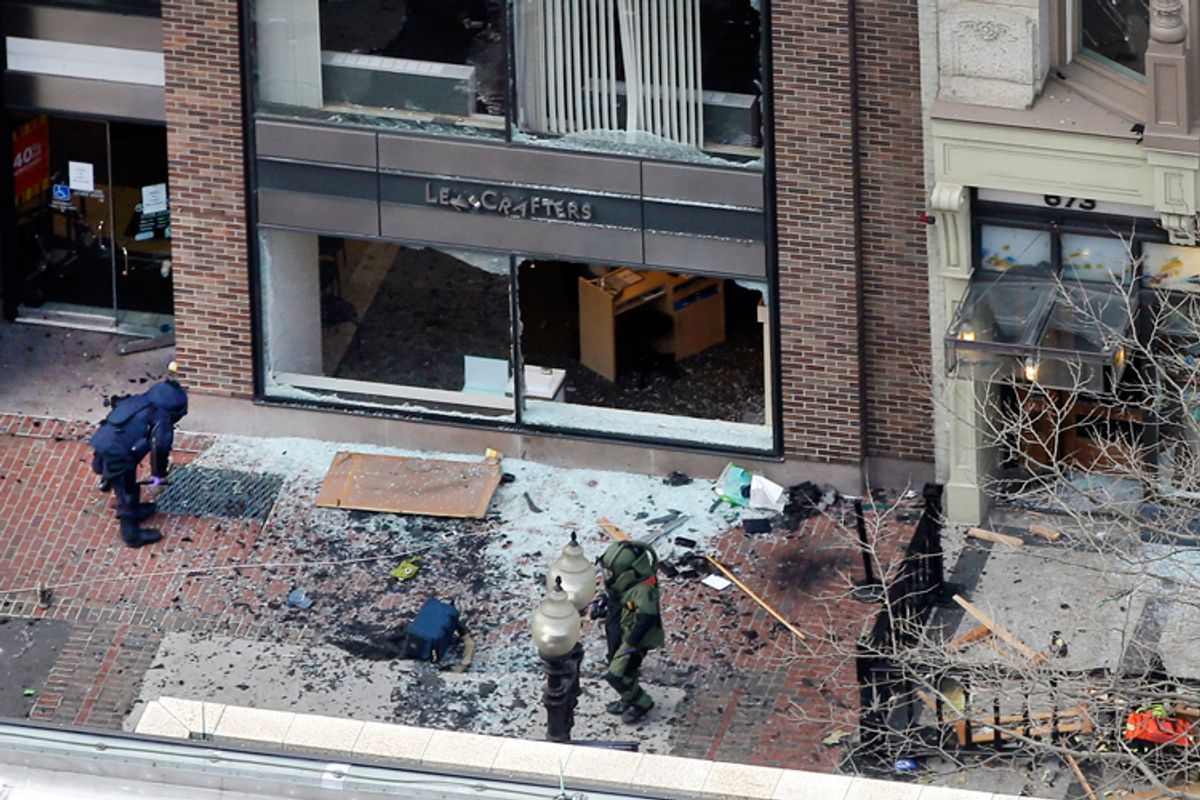 BOSTON (AP) — Investigators poring over photos and video from the Boston Marathon have an image of a potential suspect in the deadly bombing but do not know his name and have not questioned him, a law enforcement official said Wednesday.

The news came with Boston in a state of high excitement over a possible breakthrough in the case and conflicting information over whether a suspect was in custody. Police and reporters converged on the federal courthouse in the afternoon.

Several news organizations reported earlier in the day that a suspect had been identified from surveillance video taken at a department store midway between the sites of Monday's two bomb blasts, which killed three people and wounded more than 170.

A law enforcement official who spoke to The Associated Press on condition of anonymity and was not authorized to discuss the case publicly confirmed only that investigators had an image of a potential suspect and had not established his identity.

But the FBI and the U.S. attorney's office in Boston said no arrests had been made.

"Contrary to widespread reporting, there have been no arrests made in connection with the Boston Marathon attack," the FBI said in a statement. "Over the past day and a half, there have been a number of press reports based on information from unofficial sources that has been inaccurate. Since these stories often have unintended consequences, we ask the media, particularly at this early stage of the investigation, to exercise caution and attempt to verify information through appropriate official channels before reporting."

The official who spoke to the AP about someone being taken into custody stood by the information even after it was disputed.

A bomb threat forced the evacuation of the courthouse in midafternoon, the U.S. Marshals Service said, and security officials were sweeping the area. Workers were allowed back into the courthouse a short time later.

Law enforcement agencies have pleaded for the public to come forward with photos, videos or any information that might help them solve the case. Police also gathered surveillance video from businesses.

Multiple news organizations, citing unidentified sources, reported Wednesday that a video surveillance camera at a Lord & Taylor department store showed a suspect with a backpack near the finish line.

Investigators have said they believe the bombs were fashioned out of ordinary kitchen pressure cookers packed with explosives, nails, ball bearings and metal shards. They suspect the bombs were hidden in duffel bags and left on the ground.

The bombs exploded 10 or more seconds apart, tearing off limbs and spattering streets with blood.

Scores of victims remained hospitalized, many with grievous injuries. Fourteen were listed in critical condition. Doctors who treated the wounded corroborated reports that the bombs were packed with shrapnel.

The trauma surgery chief at Boston Medical Center said most of the injuries his hospital treated were to the legs.

"We have a lot of lower extremity injuries, so I think the damage was low to the ground and wasn't up," Dr. Peter Burke said. "The patients who do have head injuries were blown into things or were hit by fragments that went up."

The blasts killed 8-year-old Martin Richard of Boston and 29-year-old Krystle Campbell of Medford. The Shenyang Evening News, a state-run Chinese newspaper, identified the third victim as Lu Lingzi. She was a graduate student at Boston University.