"Please don't let it be a Muslim"

Muslims must always prove beyond an unreasonable doubt that we are patriotic, and outraged over things we didn't do 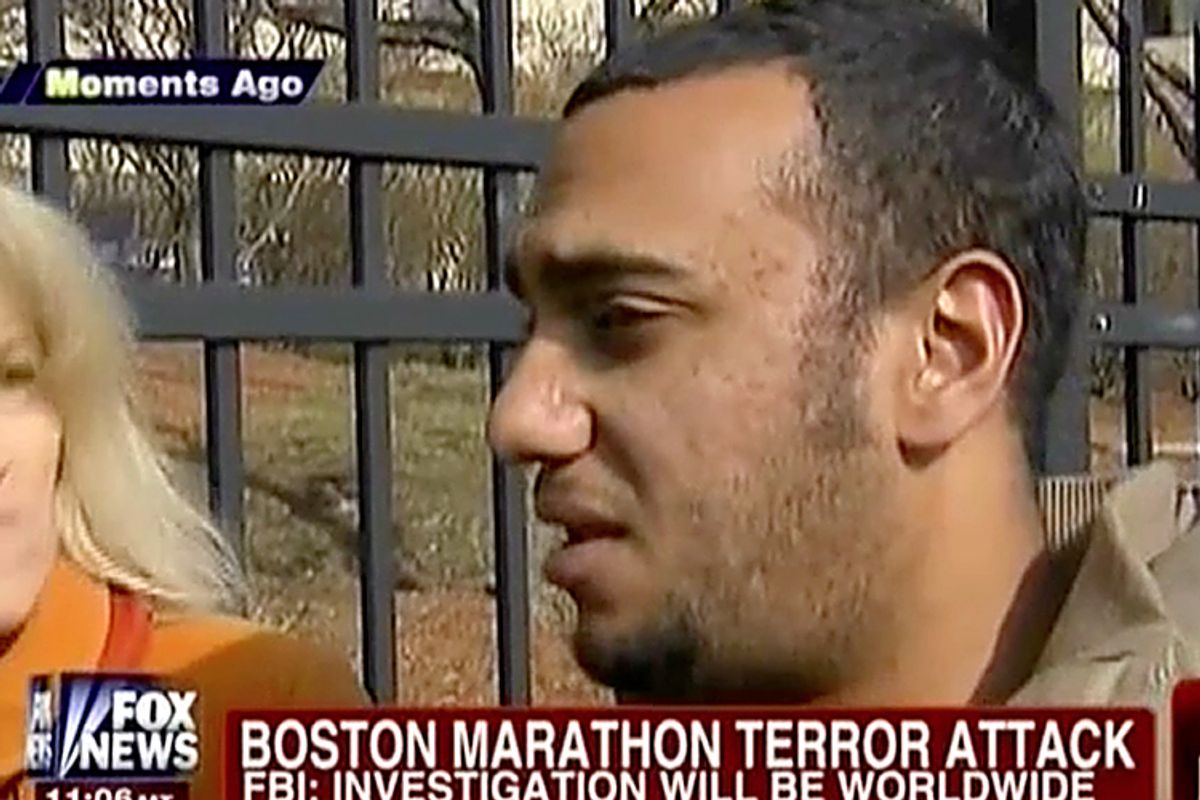 The twin bomb blasts at the Boston Marathon, which killed two and injured at least 176, inspired divergent responses to a sudden, senseless tragedy. In the immediate aftermath of the blasts, some marathon participants continued running to nearby hospitals to donate blood,  many Boston citizens offered free food and shelter to strangers, and diverse communities sent financial donations and prayers of peace and comfort to victims and their families. Others, however, chose to fan the flames of anti-Muslim bigotry and hysteria for sake of sensationalistic headlines and divisive ideological agendas.

On the day of the blasts, The New York Post, the Mr. Magoo of newspapers, declared that a Saudi Arabian national was being held as a suspect. The headline persisted even after Boston police commissioner Edward Davis confirmed law enforcement had no suspects in custody. Never letting facts get in the way of publishing fiction as truth, the Post also claimed 12 people had died, instead of the then-confirmed two fatalities. (The fatality count has since grown to three.)

Anti-Muslim blogger Pam Geller, co-founder of Stop Islamization of America, cited the Post's story with her headline “Jihadi arrested in horrific Boston bombing” deliberately conflating the ethnicity of the Trojan Horse “Saudi.” A day after the bombing, Geller revealed “…the most important piece of evidence if the Saudi national proves to be connected to the terror bombing in Boston. ‘He’s a quiet, devout Muslim.’” (Original bold). Tea Party Nation head Judson Phillips, another Islamophobe preternaturally gifted with clairvoyance, echoed: “It is a pretty safe bet right now that this attack was carried out by an Islamist.”

Pentagon officials and those with actual law enforcement credentials say there are still no suspects and no indication of al-Qaeda or foreign connections. The Pakistani Taliban denied responsibility as well.

Of course, this reckless scapegoating evokes memories of the 1995 Oklahoma City bombing that took 168 lives, including 19 children. Before law enforcement had any suspects, discredited counter-terrorism expert Steve Emerson stated the attack had a “Middle Eastern trait” because it was carried out “with intent to inflict as many casualties as possible.”  The perpetrator was Timothy McVeigh: a white supremacist, anti-government radical.

Emerson’s history of manufactured evidence, public embarrassment, and fear-mongering has not stopped C-SPAN from inviting him to comment on the Boston bombings. Emerson offered this gem: “[The Saudi] has not been convicted, but the burns on his skin match the explosive residue of the bomb that exploded.”  Later, Emerson went on Fox News and admitted the Saudi suspect had been ruled out after the announcement by Boston Police.

The unnamed “Saudi,” a student in his 20s studying at a Boston university on a Saudi scholarship, is in the hospital being treated for serious burn injuries sustained from the blast. In accordance with stealth jihadist behavior and subterfuge, he fully cooperated with law enforcement and volunteered to have his apartment searched.

The Saudi suspect fiasco teaches those who are “Muslimy” to run away from life-threatening explosions in a calm, friendly manner as to not arouse suspicion.  Another option includes running towards life-threatening explosions, but risk being falsely accused of orchestrating the violence. A third option is to stay in place with a smile plastered on your face; unfortunately, your well-intentioned attempts to placate hysteria will instead be mistaken as celebration.

The safest and best option is to freeze, smile widely, wave your American flags wildly, and repeat the mantra “I love America” patriotically. Also, because Islamophobes will forever accuse you of never condemning terrorism, please vociferously continue offering condemnations, like you always have, knowing full well they will fall on deaf, ignorant ears.

Say all of this – unless you have a foreign accent, in which case please remain silent in public. Two passengers headed to Chicago from Logan Airport were de-boarded a day after the Boston tragedy because passengers expressed concern hearing them speak Arabic.

This behavior persists despite terrorist incidents involving American Muslims declining for the third straight year. Furthermore, recent studies show American Muslims help law enforcement and are more likely to reject violence than any other U.S. religious community, and that nearly all American Muslims have no sympathy or loyalty for al-Qaida. Also, acts of extremism and radicalized violence are not unique to American Muslims. In the past year, multiple mass shooting tragedies in America have killed 66 Americans, compared to 33 fatalities resulting from Muslim-American terrorism in the decade since September 11.

Despite all this -- and a rich history that traces back to the founding of the country -- American Muslims are asked to investigate, defend, explain, self-police and apologize for our own identity and communities to absolve ourselves of guilt by association. In front of a nameless, faceless hostile judge and jury, we are interrogated to prove beyond an unreasonable, irrational doubt that we are indeed loyal, patriotic, America-holic, justifiably outraged and remorseful for acts of violence “we” did not commit– all 1.5 billion of us along with millions lumped in as “Muslimy,” including Sikhs, Arab Christians, Hindus and Persian Jews.

Some have suggested that “Muslimy” communities should not complain because scapegoating happens to all people, regardless of color, citing the media hazing of heroic security guard Richard Jewell, who was wrongfully accused as the bombing suspect in the aftermath of the 1996 Olympic bombing that killed one woman and injured 111 people.

The critical difference, however, is the powerful privilege of whiteness: when a white individual is accused of committing an act of terror he alone bears the brunt of responsibility for his crime, and the collective burden is not assigned on those who share his features. This privilege should belong to all citizens, regardless of ethnicity and religious identification, instead of being earned by surviving an unending gauntlet of pre-emptive and reactive questions, assumptions and apologies.

White people wear a Teflon cloak whereas minorities wear a flimsy, moth-eaten cape of kryptonite and a “Kick Me” sign. In other words, white people are like Bugs Bunny allowed to observe the chaos at a distance, eat a carrot and make witty quips -- but never asked to prove their loyalty or investigate and defend their own whiteness. Minorities are like Daffy Duck, forever doomed to have the anvil fall on our heads regardless of our individual guilt or innocence.

For example, here’s a CNN ticker from the day of the Boston tragedy: "Police looking for dark skinned or black male with foreign accent." This description basically describes all the men in my entire family. Or, we can look forward to the wonderful moderation of Fox News contributor Erik Rush, an African American, who indicted, prosecuted, and sentenced to capital punishment all Muslims for the Boston blasts with this tweet: “[Muslims] are Evil. Let’s Kill them all.”

Thankfully, many netizens responded by defending Muslims. Chris Stedman, a gay atheist author and interfaith activist, tweeted, "Apparently someone at Fox News tweeted ‘Kill All Muslims’ after the explosions. As a Boston resident, and as a human being, I'm disgusted.” Conservative blogger Pejman Yousefzadeh requested moderation and urged not “to use the attacks in order to vilify a certain segment of the population.”

The Boston bombings reflected a diseased heart and sickness that rationalized violence against innocents and identified those among us still blinded by ignorance, fear and hate. However, the tragedy also illuminated selfless acts of decency and shared values of compassion and empathy.

So, what if the perpetrator happens to be Muslim or a right-wing Christian or a white supremacist? Then what?  In responding to tragedy, some run to help; others run to fan the flames. One approach is honorable, the other is shameful. Most Americans, including American Muslims, will reflect their maturity, sensibility and humanity by choosing the former and moving beyond collective guilt by association.