Eden Foods' Michael Potter may have just ruined his right-wing lawsuit and his business. And he's still talking 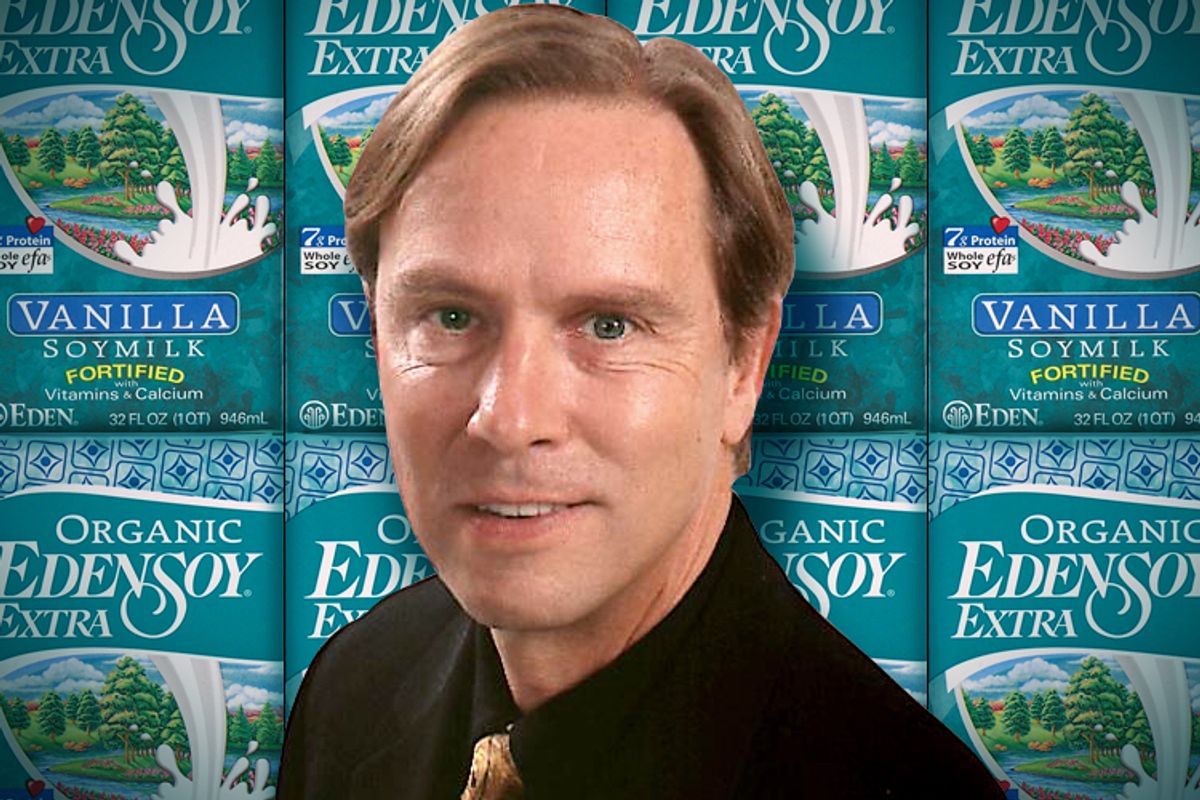 "There's so much malevolence in your approach to this, I really don't see a lot of value in talking to you, Irin," said Michael Potter, the CEO of Eden Foods, back on the phone on Wednesday. Over the last week, I'd reported that his organic food company (marketed to the crunchy, liberal set) was suing to avoid having to cover contraception in employee health plans -- as well as his subsequent phone call to me in which he doubled down by saying he didn't actually care about birth control, because he's a man, but is suing because "Obama's in your bedroom."

This time, despite claiming he wouldn't talk to me, he stayed on the phone for 20 minutes to discuss, alternately angrily and resignedly, the massive backlash among his liberal customer base to his decision to sue the Obama administration over contraceptive coverage.

I'd called Potter again because I wanted to ask him about the analysis by ThinkProgress' Ian Millhiser that in my interview with him, Potter had undermined his company's suit, which claimed that its desire not to cover birth control was based on religious beliefs.

"Potter’s supposed religious beliefs are unusually absent [in the Salon interview]," Millhiser noted. "There is nothing in federal law allowing someone to sue because they generally object to having the government tell them what to do — if that were the case, speed limits, workplace safety laws and the minimum wage would all be illegal ... If Potter does not actually object to the birth control rules on religious grounds, then that’s the end of his case." Then there were the allegations, made by two sources associated with the company, that it isn't Catholicism but rather macrobiotics, extensively discussed on the company website, that motivates Potter's opposition to birth control, which would also contradict the lawsuit's claims.

Potter sounded angry when he called me back, but he did answer questions. (I asked him twice if anything had been inaccurate or misleading in my earlier reporting, and he didn't point to anything.) Asked about macrobiotics, he said, "It didn't come into play at all in any of the discussions we have." So, I asked, it's motivated by his belief as a Catholic?

"Not so much that as our denial of our rights to exercise our conscience," he said, confusingly. "And the government overreach into that. They're infringing the religious freedoms that are supposedly in the Constitution. I think those are more important than any particular religious dogma."

I rephrased. "What particular belief leads you to oppose this regulation?"

"Well, there isn't any one particular religious belief, Irin," he said, sounding irritated. "I find it hard to get my head around the question."

Along with the conservative Catholic legal firm the Thomas More Society, Potter is suing under the Religious Freedom and Restoration Act and the First Amendment, claiming that birth control coverage required under the Affordable Care Act violates his religious beliefs as a Catholic. The former law protects from a substantial burden on a person's exercise of religion, and courts generally examine both whether a belief is sincere and whether it is religious. There hasn't been one settled belief of what constitutes a religion.

The ACLU has been involved in several lawsuits around the contraceptive mandate in the Affordable Care Act, which it supports.  I asked Daniel Mach, director of the ACLU Program on Freedom of Religion and Belief, to weigh in on the analysis that Potter had undermined his case. “Of course, directly contradicting allegations made in your own complaint is rarely a successful legal strategy," said Mach. "But even the most sincere religious objections don’t give businesses the right to insist that their employees’ health practices and benefits conform to the owners’ faith.”

On Wednesday, even as its Facebook page remains inundated with comments on the lawsuit, the vast majority opposing it, Eden Foods released a statement. "We apologize for the unintended consternation given rise to by this action," it said in part. "We believe in a woman's right to decide, and have access to, all aspects of their health care and reproductive management. This lawsuit does not block, or intend to block, anyone's access to health care or reproductive management. This lawsuit is about protecting religious freedom and stopping the government from forcing citizens to violate their conscience. We object to the HHS mandate and its government overreach."

It erroneously claimed that federal employees were exempt and that some religions were and weren't exempted. No for-profit company has been exempted; the outstanding question has been whether nonprofit organizations that have religious affiliations will be exempt.

"For me to acquiesce to this HHS mandate would be a dereliction of my duties," Potter told me. "You know, from the way I was raised, just to accept the absurdity of that didn't seem like the right thing for me to do. Was it the right thing? What it the wrong thing? I don't know. I believe it was the right thing to do .... Them forcing Eden Foods to fund contraception and the list of -- it's not just birth control pills, it's a whole category of things that I don't think any company should be forced to be involved with." He added, "Eden Foods being characterized as any type of impediment to people's access to all of the above is ludicrous on the face of it. This stuff, it's all available. It's all free according to the HHS mandate."

"Well, it's fully covered by insurance ..." I began -- that is, under the policy he's suing to be exempt from.

"So why do they need to force -- it just seems like an unnecessary assault on constitutionally guaranteed protections," he said. And then he returned to the "malevolence, hate, vitriol that's been given rise to by your articles."

"It seems to me the response to you is part of the democratic process," I said. "They disagree with your decision to sue and they're making a consumer decision in response."

He replied that the feedback was "very emotional and hateful, a large portion of it." He paused. "I regret that, creating that type of energy." Meanwhile, his lawsuit, troubled though it may be, proceeds apace.