His bail had been revoked after being accused of treason 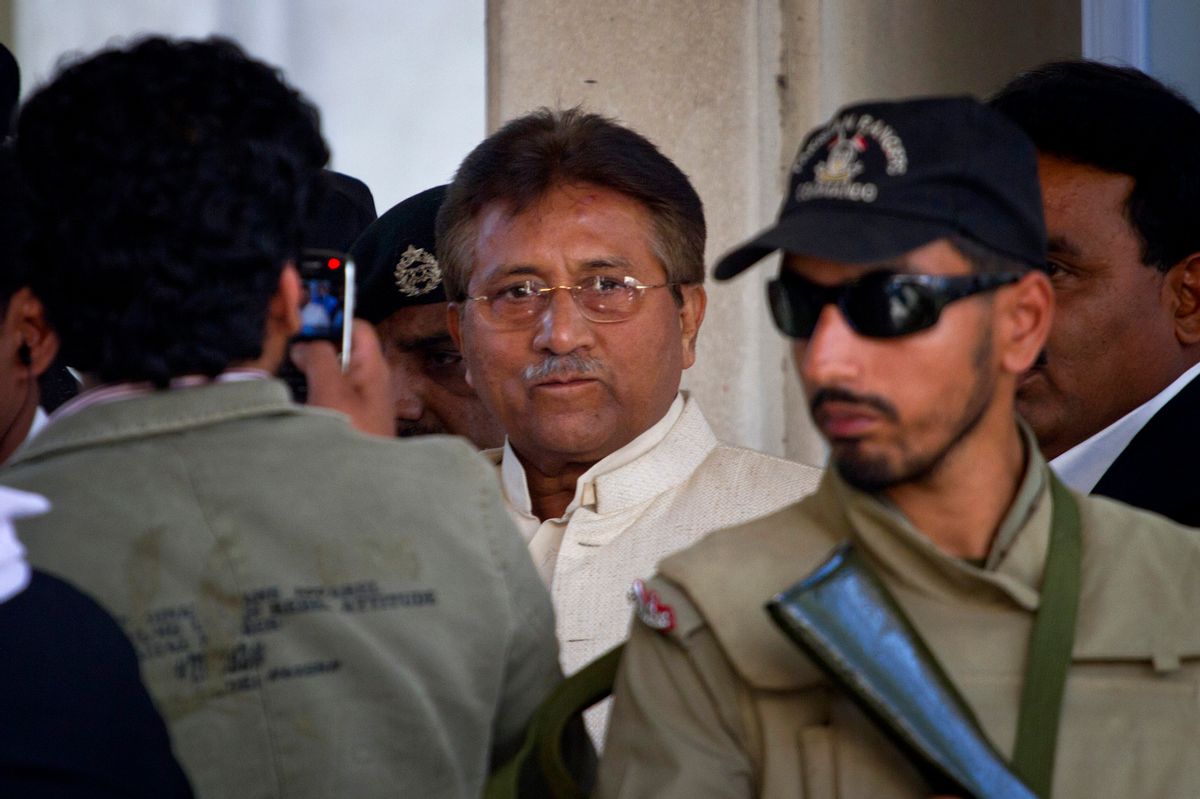 ISLAMABAD (AP) — Former Pakistani military ruler Pervez Musharraf and his security team pushed past policemen and sped away from a court in the country's capital on Thursday to avoid arrest after his bail was revoked in a case in which he is accused of treason.

Local TV broadcast footage of the dramatic scene in which Musharraf jumped into a black SUV and escaped as a member of his security team hung to the side of the vehicle. He sped away to his large compound on the outskirts of Islamabad that is protected by high walls, razor wire and guard towers.

This week has gone from bad to worse for Musharraf, who seized power in a coup in 1999 when he was serving as army chief and spent nearly a decade in power before being forced to step down in 2008. He returned last month after four years in self-imposed exile to make a political comeback despite legal challenges and Taliban death threats, but has since faced paltry public support.

A court in the northwestern city of Peshawar on Tuesday disqualified Musharraf from running in the parliamentary election scheduled for May 11, likely squashing his hopes for political comeback.

The case before the Islamabad High Court on Thursday involved Musharraf's decision in 2007 to detain senior judges, including the chief justice of the Supreme Court, when he declared a state of emergency and suspended the constitution.

The decision outraged many Pakistanis, and further fueled a nationwide protest movement by lawyers that eventually resulted in Musharraf stepping down under the threat of impeachment.

Lawyers shouted, "Look who is running, Musharraf is running!" as Musharraf fled the court Thursday.

Before he returned to the country, Musharraf obtained pre-arrest bail for the judges' case and two others, meaning he could not be arrested when he landed — a feature of Pakistan's legal system.

The Islamabad High Court refused to extend that bail on Thursday and ordered his arrest, said police officer Ali Asghar.

The court previously agreed to extend his bail in the case for six days on April 12. The same judge rejected a further bail extension Thursday, saying the case was "too serious" and must proceed, said one of Musharraf's lawyers, Malik Qamar Afzal.

Policemen were deployed at the court who could have detained the former military ruler, but he managed to escape, said Asghar, the police officer.

Many of the policemen and paramilitary soldiers at the court did not seem to try to prevent Musharraf from leaving as he pushed past them.

Another of Musharraf's lawyers, Ahmad Raza Kasuri, complained that the court didn't listen to their arguments.

"It is a one-sided decision," said Kasuri.

A third Musharraf lawyer, Raja Mohammed Ibrahim, said he would file an appeal with the Supreme Court on Friday, challenging the decision.

Musharraf's decision to flee the court could put the Pakistani army in an awkward situation. The former general is protected by paramilitary soldiers who officially report to the Interior Ministry, but are headed by senior army officers.

Ali Dayan Hasan, the director of Human Rights Watch in Pakistan, called on the military authorities protecting Musharraf to comply with the court's order and ensure that he presents himself for arrest.

"General Musharraf's act today underscores his disregard for due legal process and indicates his assumption that as a former army chief and military dictator he can evade accountability for abuses," said Hasan in a statement sent to reporters.

"Continued military protection for General Musharraf will make a mockery of claims that Pakistan's armed forces support the rule of law and bring the military further disrepute that it can ill afford," Hasan said.

Pakistan has a long history of the army seizing power in military coups, and the service is considered the most powerful institution in the country.

If convicted of treason, Musharraf could face the death penalty or life in prison. But the federal government would have to file charges against the former military ruler, which it has not yet done. The petitions in Islamabad High Court accusing Musharraf of treason were all filed by individuals.

Musharraf faces similar accusations from petitions filed before the Supreme Court. He also faces legal charges in two other cases. One involves allegations that Musharraf didn't provide adequate security to former Prime Minister Benazir Bhutto, who was killed in a gun and suicide attack in 2007. The other relates to the death of a nationalist leader in Baluchistan in 2006.

Given the legal challenges and Taliban threats against Musharraf, many experts have been left scratching their heads as to why he returned. Some have speculated he misjudged the level of public backing he would get, while others guessed he was simply homesick.

Musharraf flew to the southern city of Karachi from Dubai on March 24. He was only met by a couple thousand people at the airport, a sign of how little support analysts say he enjoys in the country. A few days later, an angry lawyer threw a shoe at Musharraf as he was walking through a court building in Karachi.

The former military ruler applied to run for parliament from four different districts in Pakistan, which is allowed by the country's political system. Judges initially rejected three of his applications, but an official in the remote, northern district of Chitral gave him approval to run.

That changed Tuesday when the High Court in the northwestern city of Peshawar disqualified Musharraf in Chitral. He can appeal the decision to the Supreme Court, but legal experts speculated that chances the decision would be overturned were remote.

Dozens of police and elite commandos blocked the main road leading to the compound where Musharraf was holed up on the outskirts of Islamabad on Thursday and residents were asked to use another route to go to their homes.

About 20 Musharraf supporters who gathered near the compound held banners and shouted slogans in favor of the former military ruler.