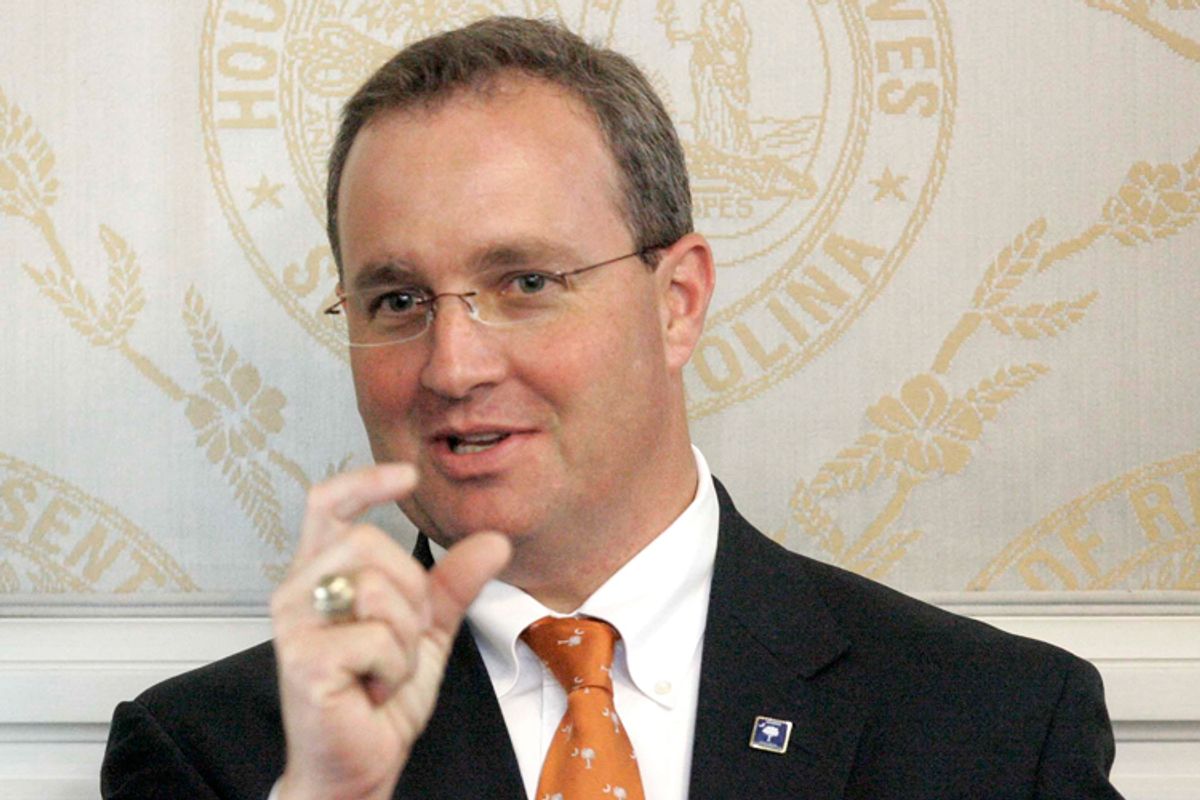 It didn't take long for a lawmaker to pick up the latest right-wing conspiracy theory about the Boston Marathon bombings. Just hours after controversial terrorism expert Steve Emerson reported last night on Sean Hannity's show that unnamed "sources" told him the government was quietly deporting the Saudi national who was initially suspected in the bombing, South Carolina GOP Rep. Jeff Duncan grilled Homeland Security Secretary Janet Napolitano on the rumor at a hearing this morning.

Duncan, a member of the House Homeland Security Committee and chairman of the Subcommittee on Oversight and Management Efficiency, harangued Napolitano for the alleged deportation, which he asserted as fact. "Now we have someone being deported for national security concerns and I'm assuming he's got some sort of link to terror or he wouldn't be being deported," Duncan said. "And yet we're going to deport him? We're going to remove him from the scene?"

Napolitano fired back sharply, dismissing the premise of his question. "I'm unaware of anyone who is being deported for national security concerns at all related to Boston. I don't know where that rumor came from," she said.

As secretary of the Department of Homeland Security, Napolitano oversees the Immigration and Customs Enforcement agency, which is responsible for deporting people, and would thus likely be aware of such a deportation, if it existed.

Duncan responded by acknowledging that while the deportation may not be related to Boston, "He is being deported." Napolitano interrupted him, saying, "No. Like I said, I don't even think he was technically a person of interest or a suspect, that was a wash."

But the congressman wasn't ready to concede. "Wouldn't you agree with me that it's negligent for us as an American administration to deport someone who was reportedly at the scene of the bombing?"

"I am not going to answer that question, it is so full of misstatements and misapprehensions that it's just not worthy of an answer," the Homeland Security secretary shot back, prompting murmurs in the room as Duncan took a moment to respond before ending his questioning.

Duncan's willingness to embrace Emerson's charge highlights how quickly theories can go from the fringe to the mainstream in an environment when the political opposition is desperate to score political points against the president, and less concerned about getting facts right.

Here's a video of the exchange, which Duncan's office posted on their official YouTube channel, suggesting they think he came off looking pretty good:

UPDATE: CNN's Jake Tapper rains on the conspiracy parade by reporting that the Saudi is not a suspect or person of interest, but that there is a second Saudi national from Boston being held by immigration authorities on a routine visa matter that is completely unrelated to the Boston Marathon bombings. The second person is presumably whom Emerson's sources told him about. Even the Daily Caller reports the same.